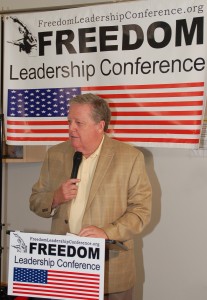 Michael Thompson served as “Master of Ceremonies” at the 9/11 Memorial Freedom Leadership Conference on 9/11 during the Movie Night segment (Free China: the Courage to Believe) and will be the keynote speaker at the next conference on Thurs., October 17, 2013 (free admission).

Liberty Amendments proposal of Mark Levin to be featured

Michael Thompson, President of The Thomas Jefferson Institute for Public Policy, will be the keynote speaker at the October 17, 2012 Freedom Leadership Conference at the Fairfax Marriott Hotel at Fair Oaks (register free HERE).   The evening theme will be a “Conservative Change Conference” to highlight some proposals for change in America.  Thompson serves as President of the Jefferson Institute, which is this month’s Conference Sponsor.

As part of the “Conservative Change” theme, the recent proposal for “Liberty Amendments” by popular conservative author Mark Levin to change the U.S. Constitution will be a second focus of the evening conference, with a speaker to be announced shortly.   The “Liberty Amendments” theme will be in two parts, with the second at the November 13 Conference at the same Fairfax Marriott.

The conference is free admission with a suggested donation of $5 to cover the first half hour (7 to 7:30 PM) coffee, tea and dessert social, with admission by advance registration only (HERE).

Those who are already conference members and Conference Provisional members may also attend the dinner (5 PM admission, dinner served 5:30 PM promptly) with the conference leadership honoring the keynote speaker (you must first apply HERE).

This secondary theme to be featured at this October 17 and also the November 13 conference (both at the Fairfax Marriott at Fair Oaks, VA), is:

Is this the only way to restrain the continuing growth of federal power at the expense of individual liberty in America?

Michael Thompson’s Virginia tax reform proposal is the result of a study by the Thomas Jefferson Institute to undertake a revenue neutral restructuring of business taxes that they project will create 80,000 new jobs in Virginia.  The proposal calls for cutting the gross receipts tax and other taxes which severely handicap business growth.

Most conservatives are aware that in America we double tax dividends – forcing corporations to pay tax once when the dividend on profits is sent to stockholders (owners) of a business, and then a second time when the person who receives the income, pays tax again.  Very simply, the consumer ends up paying ALL of these costs which are passed on to them in the price of goods and services, contrary to what liberals always proclaim with their perpetual “soak the rich” demands.

But, in Virginia, there is actually a THIRD tax on the same business income, called the “gross receipts tax.”  This and other taxes which handicap business, ought to be repealed, and replaced with other taxes on consumer spending, proposes the Thomas Jefferson Institute.

Michael Thompson spoke at and served as the Master of Ceremonies for the movie segment of the 9/11 memorial Freedom Leadership Conference held on 9/11 with the movie Free China: the Courage to Believe (see his remarks click on youtube video above or HERE).

The other conference theme of the Liberty Amendments has one central assumption: it is absurd and unreal to think that there is any mechanism by which the federal government will ever curtail and curb its own powers, and so the OTHER method envisioned by the founding fathers ought to be used to enact these “Liberty Amendments” proposed by Mark Levin in his new book by the same name.

The “Liberty Amendments” subject was barely covered in an entire one hour show by Sean Hannity on Fox TV recently.  That is the Freedom Leadership Conference will address this topic over the course of two conferences, on Thursday October 17 and then part 2 on Wednesday, November 13, both at the Fairfax Marriot Hotel at Fair Oaks, Virginia (just off I-66 on Rt. 50).

The mission of the Thomas Jefferson Institute for Public Policy is to provide Virginia’s political, business, academic, community and media leadership with thoughtful, realistic, useful and non-partisan analysis of public policy issues confronting our Commonwealth.

These alternative policy ideas focus on state and local issues and are based on the Institute’s belief in free markets, limited government and individual responsibility. The general areas of interest for this Institute are reforming government, economic development, improving health.

Prior to working for the Thomas Jefferson Institute, Mr. Thompson was for 24 years the owner and president of the Thompson Creative Marketing Group, a nationally recognized marketing and public affairs company in Springfield, Virginia.

He was also the president of the Mather Furniture Company, a family owned business in Georgia. He is the past Chairman of the Virginia Leadership Council, the state’s Board of Directors for the National Federation of Independent Business (NFIB), the nation’s largest small business organization with over 6,000 members in our state, and remains on its Board of Directors. He served on the Attorney General’s Regulation Reform Commission in 2008-2009 as a member of the Infrastructure Task Force and on Governor-elect Bob McDonnell’s transition team on Government Reform. He is a member of the “Grow by Degrees” committee focused on higher education.

Mr. Thompson has been an active leader in the Virginia Republican Party and served in many leadership capacities at the state and local level. Thompson co-chaired the Bob McDonnell for Governor’s Government Reform Issues Committee during the campaign of 2009. He is active in his community and served three terms as President of the Springfield District Council, an organization representing over 200 homeowner associations.

He has served many years on the Executive Committee of the Fairfax Federation of Civic Associations (the umbrella organization for all homeowner associations in Fairfax County). He helped found and remains on the Board of Directors of the Occoquan Watershed Coalition in Fairfax County.

Thompson was the Governor’s appointee to the Small Business Assistance Compliance Advisory Board for the Department of Environmental Quality, served on the Board of Directors for several years of the Washington DC area chapter of the National Kidney Foundation, and has served on several Fairfax County commissions and task forces. He also serves as Vice Chairman of the internationally renowned Fund for American Studies working with college and university student leaders around the world to promote a market economy and free political systems. (the foregoing is from the Institute’s website).

Mike Thompson began his career as an activist in the group which many credit as “the creator” of the modern day conservative movement, Young Americans for Freedom, formed in 1960, serving at the local, state and national levels and rising to the national vice chairmanship of the conservative youth group.  He remains an active and influential member of The YAF Archive, the informal and unofficial association of YAF alumni at google groups.

The November 13 Freedom Leadership Conference will be sponsored by Uniformed Services League (USL), as a “Salute to our Servicemen” and “Save our Servicemen Rally” (SOS) featuring keynote remarks by United States Congressman Scott Perry (R-PA), an Iraqi war veteran (Colonel, US Army National Guard).  USL’s theme is to focus on the threats to American servicemen – whether they serve abroad or here in America.

Most people are shocked to learn that American servicemen are disarmed and not allowed to carry firearms on U.S. military bases – making them and students the perfect target for terrorists and madmen with a gun.  Typically, the reaction of American liberals to incidents such as at Ft. Hood and more recently at the Washington Navy Yard, is to extend the “no guns” zone even further.

There will be special recognition at this “Veterans Day” event (2 days after Veterans Day) on Wed., November 13 for U.S. military veterans and additional remarks by U.S. military officers (retired).  If you are a veteran and wish to be considered as a speaker please write EventCoordinator@FreedomLeadershipConference.org.

To reserve your place at this conference at 7 PM – or if you are a member at the 5 PM dinner – please click HERE.