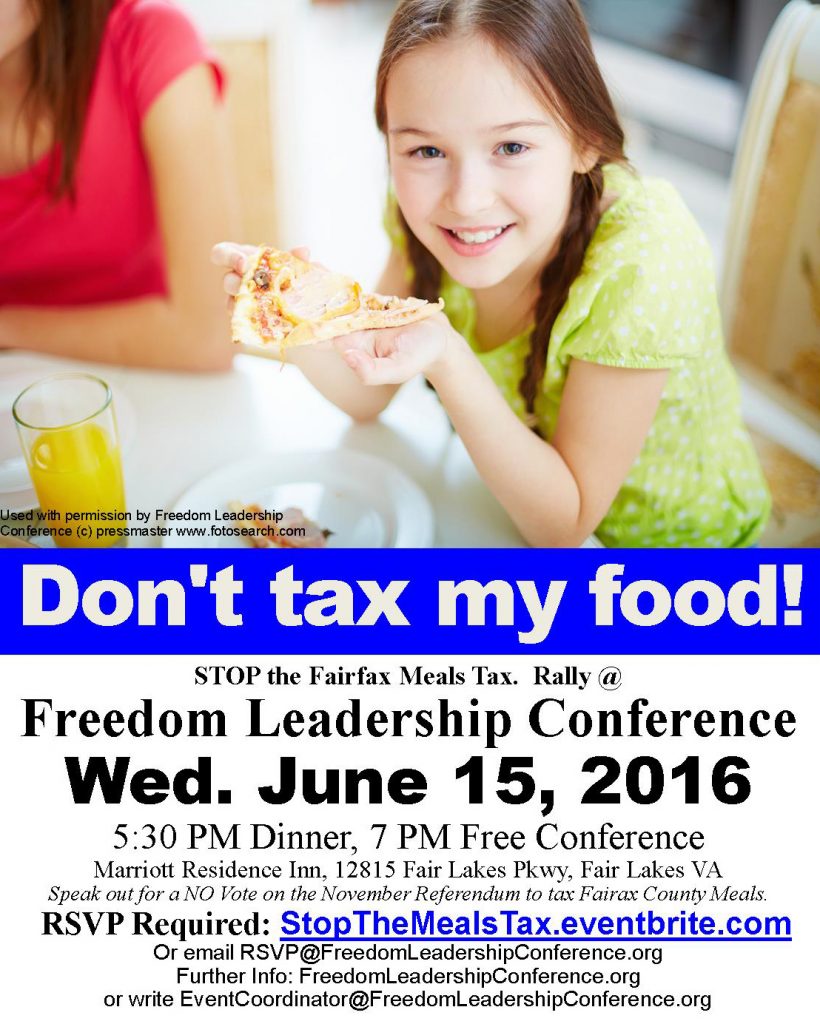 Freedom Leadership Conference announced its new ad campaign to fight the proposed Fairfax Meals Tax and boost attendance at its anti-tax conference on Wed., June 15, featuring a picture of a student eating a slice of pizza with the slogan in bold “Don’t tax my food” pictured here.

Advocates for the Meals Tax are using photographs of little children in their campaign to persuade voters in Fairfax to adopt their Meals Tax on the November 2016 ballot.  Their argument is that in Fairfax County, one of the highest taxed and lavishly funded Education systems in America, the little children will starve if this new tax increase proposal is not adopted.

The truth is that the money won’t be used to feed starving children but for one of the most consistent and highest Democratic Party constituencies, teacher and government workers getting more pay and pension benefits.  All part of the “get out the vote” effort for Hillary Clinton and her Democratic Party ticket this election year.

Before we share with you the reaction of County Board of Supervisors member Pat Herrity after the Board voted to put this tax increase on the ballot for November 2016, a reminder.  Book your seat at the free conference (7 PM) featuring speakers to oppose the Meals Tax and Dr. Sebastian Gorka, author of the new book, Defeating Jihad: The Winnable War, or come earlier (5:30 PM) to join the speakers for dinner, HERE.

Last call for the discounted early bird dinner tickets for the Wed., June 15 Freedom Leadership Conference where two co-sponsors are presenting speakers in opposition to the meals tax: Conference Co-Sponsors Fairfax County Taxpayers Alliance and American Grassroots Council are providing speakers for this segment of the conference.

Donations and Host Committee gifts ($100) will be used to fund this new graphic featured in this post in a targeted social media advertising effort.  The ad campaign has the twin goals of alerting Fairfax voters about the proposed tax increase on meals – using our opponents’ favorite tactic of featuring one of the young students who the tax will hurt, not help as they claim – and to boost attendance at the conference.  If you make use of Facebook please visit our Fan page and “like” this ad and share it with your friends, and share this post via email and using the “like” links at the bottom.

Now here’s Supervisor Pat Herrity’s reaction to the passage by the Democrat controlled Board of Supervisors of this proposal to put the meals tax increase on the ballot this November.

“Today, the Fairfax County Board of Supervisors voted 8-2 to place a Meals Tax Referendum on the November 2016 ballot. If approved by voters, the tax on prepared foods in the county would go to 10% – a 4% meals tax in addition to the 6% state sales tax already levied. If approved, all prepared foods and beverages, whether purchased at grocery stores, restaurants, lunchrooms, cafeterias, coffee shops, cafes, taverns, delis, push carts, or food trucks will be taxed at 10%.

“At today’s meeting, I asked the Board to include a simple clarification that the tax was an additional tax. The motion, seconded by Supervisor Cook, to add the words “an additional” failed on a vote of 7-3. Thank you to Supervisors Cook and Smyth.

“I have been consistent in my position against the meals tax referendum and it became even clearer coming on the heels of a 7% tax increase last year (26% over the last 5 years). The meal tax targets a specific industry – an industry that does so much for our schools and the community. While a small portion of the tax will be paid by non-county residents, the vast majority will be paid by county residents. It is a regressive tax and will impact those that can afford it the least. This prepared foods tax is not the answer to Fairfax County’s spending problems and I do not support it.

“Over the past two years alone, the Fairfax County Board of Supervisors has voted to increase property tax rates, storm water taxes, Sewer Service charges, and youth athletic fees all while voting to raise their own pay by 27%. I could give many examples of our spending problems, but let me leave it with this – as long as we continue to give our NEW (and let me reiterate new not existing) general county and school employees a second pension benefit that no other jurisdiction in the area offers, then we have a spending problem.”

(note: Supervisor Herrity appears to have an unresolvable conflict which will preclude him attending this conference where he is speaking at a student graduation on the same date as our conference.  We are still hopeful he may attend a part of the dinner, even if only to stop by briefly and address the group.  Stay tuned.  The flyer featuring his photo will be revised in the next 24 hours)