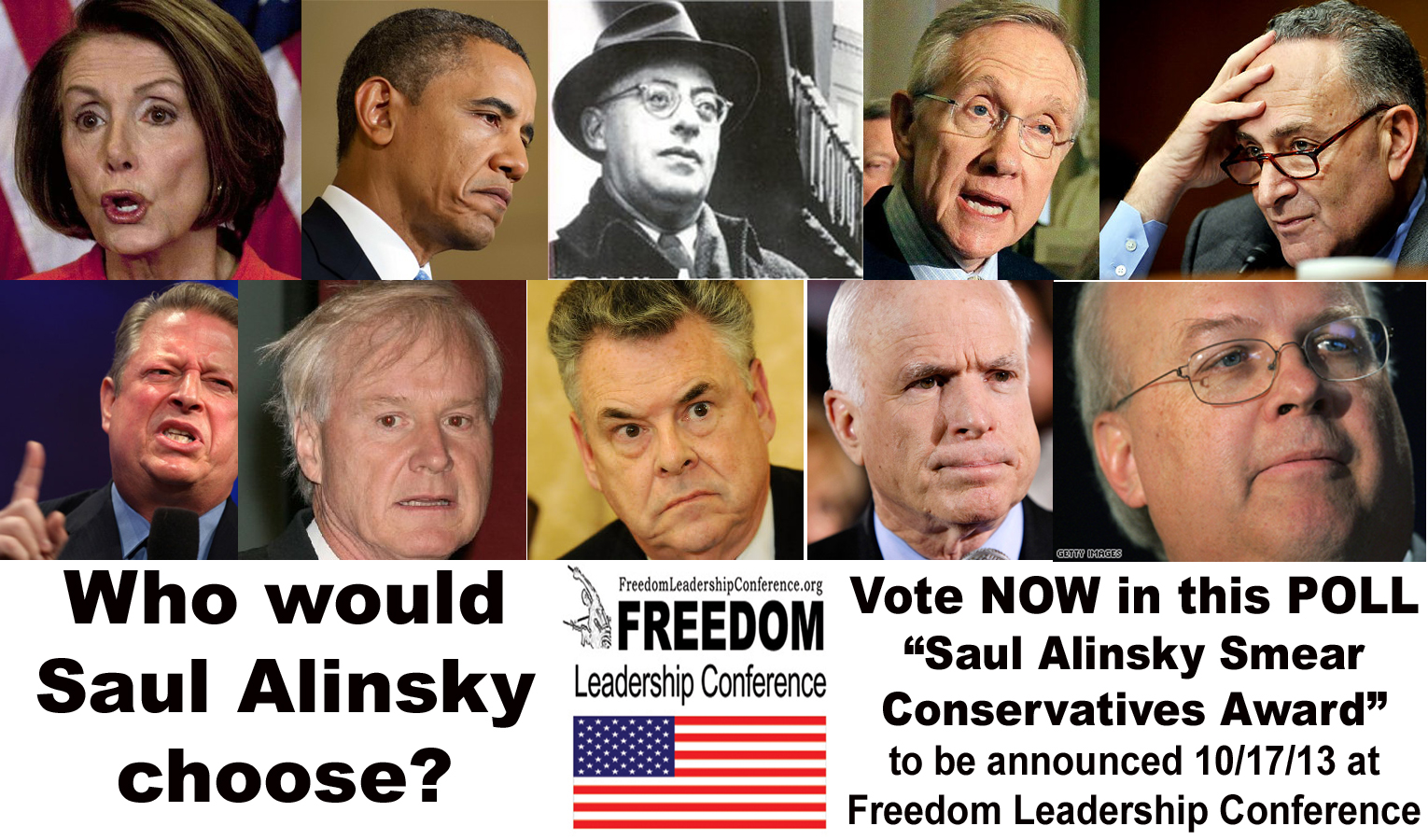 Freedom Leadership Conference will award a “Saul Alinsky Smear Conservatives” Award Thursday – who should it be?

Who do you Choose? Vote now, Award to be announced Thursday!

The Freedom Leadership Conference this Thursday evening, October 17, has a record breaking number of nominees to win the “Saul Alinsky Smear Conservatives Award” under consideration for this month (register to attend HERE).  While Democrats dominate the nomination list there are several Republicans who have been suggested for the award.  Those who attend the Conference dinner will help decide the eventual winner to be announced after the conference starts at 7 PM at the Fairfax Marriott Hotel at Fair Oaks, VA.

Additional nominees are also welcome –and written comments are welcome as to who the winner should be – which can be sent to RSVP@FreedomLeadershipConference.org or may be marked in the Alinsky survey.

Most of the attacks on conservatives in recent weeks have been the result of the “defund Obamacare” debate in the Senate and the House.  The liberal mainstream media have also played up the attacks on conservatives by Republicans such as Karl Rove, Senators John McCain, Senator Bob Corker, Senator Richard Burr and others.  As they have done since the Goldwater-Rockefeller fight literally 50 years ago the news media act like it is a brand new idea, that majority GOP conservatives fight entrenched establishment Republicans.

Without a doubt, the most hateful things said about conservatives in recent weeks have been said by liberal to leftist Democrats even with some GOP leaders joining in.

The monthly Freedom Leadership Conference award is named after Saul Alinsky, whose “Rules for Radicals” teaches leftists to “demonize and pulverize” conservatives rather than debate issues with them.  The result of such a strategy is that it always confuses and demoralizes many of the followers of those so targeted, turns off the middle voters against the target, leaves the conservative target stunned, and mobilizes and arouses the leftist army for battle.  There are always some Republicans and even some conservatives who, either out of confusion or an ambition to seize media attention, join in the attack on the conservative so attacked by the left.

Another example of the result this earns for the left in recent days and weeks are when generally conservative Fox TV Commentators like Bill O’Reilly and Mike Huckabee refer to the “broken” system in Washington and blame both political parties equally for the “gridlock” they decry.  As Huckabee said on Fox TV this past Saturday night, he wants politicians who “will make the system work.”

Do Huckabee and O’Reilly suggest that Republicans can best ‘fix” things by giving in to the Democrats on Obamacare and on spending or whatever else Democrats demand?  Have they any specific suggestions as to how you negotiate with a White House which says it will not negotiate or even talk to House leaders?  Have they suggestions as to how the House should react when specific compromise bills are rejected one after another by Senate Majority Leader Harry Reid without even scheduling debate or a vote?  No.

“reckless and irresponsible” …  “they take hostages…they extort” …  “We need to act like adults, not like squealing political pigs” … “a banana Republican mindset” …

Who should win the “Saul Alinsky Smear Conservatives” Award this month, in your view?  Please take a moment to vote in the survey, click HERE to make your choice.

“…legislative arsonists.  They’re there to burndown what we should be building up” … “people who have a bomb strapped to their chest” … “is political terrorism” …

One view among conservatives is that despite the despicable things being said by some Republicans about fellow Republicans, the focus ought to be on the liberal Democrats, not Republicans jockeying for internal partisan advantage against conservatives.

The other view is that a major problem of the GOP has been that too many aren’t willing to stand up to Barack Obama and the Democrats, and that those attacking conservatives should be criticized – including noted Republicans like John McCain, Karl Rove and others.

Where do you stand?

If you attend the Freedom Leadership Conference you’ll know our answer when the “Saul Alinsky Smear Conservatives” award is announced this Thursday. 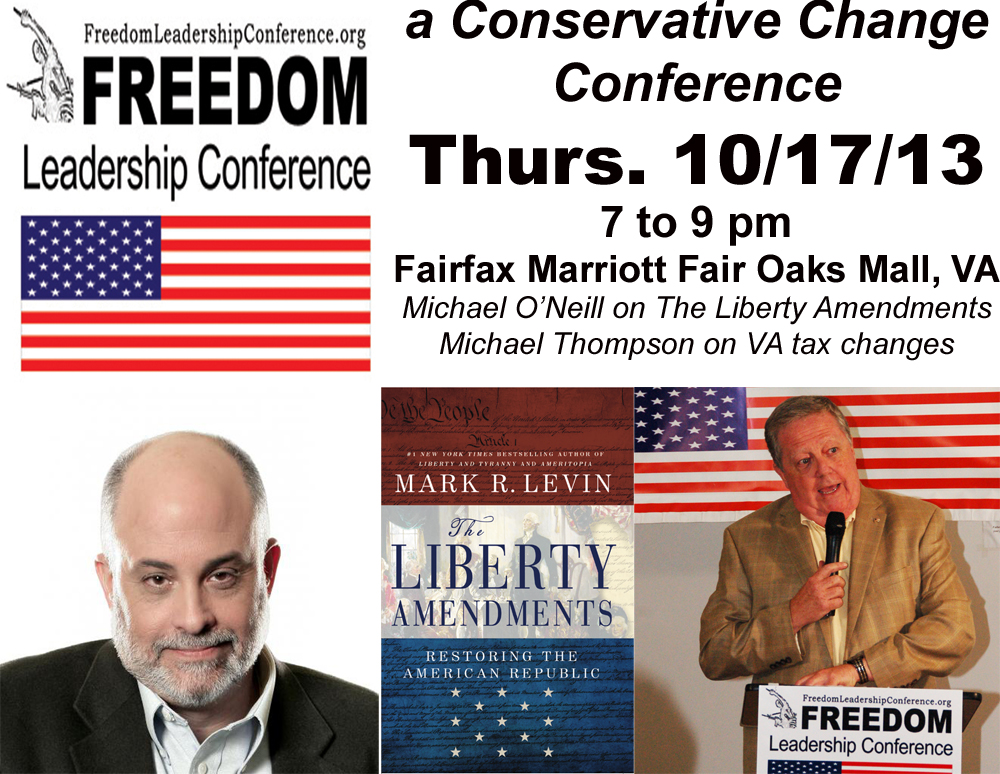 If you are a Conference Member you have the option of attending the conference dinner which precedes the conference – from 5 PM (dinner served 5:30 PM) til 7 PM – where this matter will be discussed and decided after the “Alinsky Survey” is tabulated and announced.

In recent years, conservatives have come under increasingly bitter and acrimonious attack by leftists.  Human Events named Daily Kos, for example, as the #6 worst hate site in America, while websites such as Media Matters and Huffington Post give them a good run for the money.

Conservative candidates for President have been especially smeared and tarnished by the liberal-left attack machine, all apparently good students of Saul Alinsky.  This includes Rick Santorum, Newt Gingrich, Herman Cain and Michele Bachmann, to name several.

Here are what some of this month’s nominees have said which earned them nomination.  In the case of Karl Rove, it is his second nomination for his attacks on conservatives.  None of these nominees has yet earned the award this year.

“This is reckless and irresponsible.  Republicans are not focused on what’s best for you.   They’re playing political games.”  President Barack Obama

“You cannot negotiate when they take hostages and when they extort, period.”  Senator Charles E. Schumer (D-NY)

“This is a six-week funding bill, all it is, six weeks.  If you cannot pass this, we are truly entering a banana Republican mindset.” Senator Majority Leader Harry Reid (D-NV)

“I call them legislative arsonists.  They’re there to burn down what we should be building up.”  Rep. Nancy Pelosi (D-CA)

“What we’re not for is negotiating with people who have a bomb strapped to their chest.”  Dan Pfeiffer (Senior White House Advisor)

“The only phrase that describes it is political terrorism.”  Al Gore (Former Vice President)

“…it’s always the wacko birds on right and left that get the media megaphone. I think it can be harmful if there is a belief among the American people that those people are reflective of the views of the majority of Republicans. They’re not.” (referring to Senator Paul Rand and Senator Ted Cruz).  “one of the McCain’s advisers said “He fu**ing hates Cruz.””   Senator John McCain (R-Az)

“I didn’t go to Harvard or Princeton, but I can count — the defunding box canyon is a tactic that will fail and weaken our position.”  Senator Bob Corker (R-TN)

“Well, this strategy of defunding Obamacare was an ad hoc strategy laid out without consulting with his fellow senators and at every step of the way, it’s been sort of cobbled together on the fly.”  Karl Rove

The Freedom Leadership Conference this month is sponsored by the Thomas Jefferson Institute for Public Policy, whose President, Michael Thompson, will deliver keynote remarks on the tax reform proposal of the Institute.   That proposal includes a plan to abolish several of the taxes which inhibit business growth in Virginia, such as the gross receipts tax, and would generate 80,000 new jobs, they report.  the previous story on this topic is here:   Conservative Change Conference set for October 17, 2013; Michael Thompson to speak at Freedom Leadership Conference on new tax proposal for Virginia; Liberty Amendments proposal of Mark Levin to be featured