Should Virginia Tax Code be Changed? 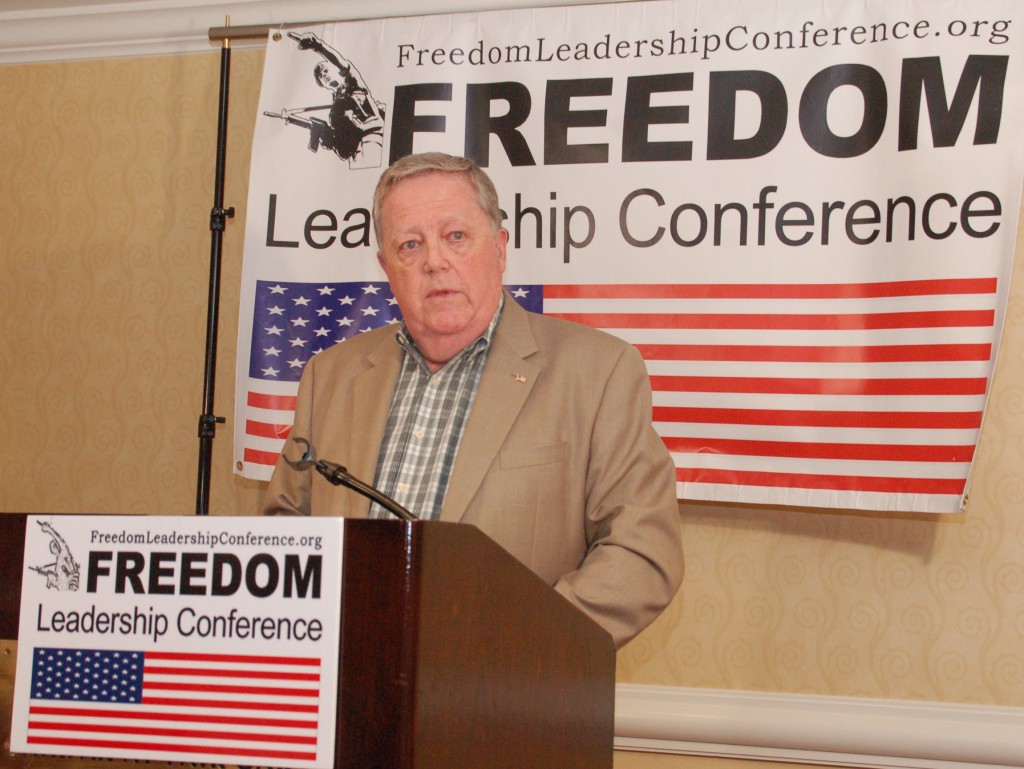 With election day tomorrow in Virginia, we know that somebody may soon be repeating the old refrain “elections have consequences” so we begin this report with a reminder to vote and to urge your like minded friends to vote too.  But, regardless of who wins in Virginia, do ideas matter at all?  If they do, a proposal made at the October Freedom Leadership Conference by Michael Thompson, speaking in behalf of the Thomas Jefferson Institute for Public Policy – where he serves as President – should be considered by the Governor and state legislators.  The proposal is HERE (under speeches – Mr. Thompson did not provide the text of his remarks) and the video of his remarks posted to youtube is HERE.

While the idea of tax cuts and helping business are considered by many to be the domain of the Republican Party, Mike Thompson and his non-partisan Institute propose ideas that will benefit the economy of Virginia by streamlining the tax burden on business, and putting those same taxes elsewhere – including on those providing services.

Video of Thompson remarks – click HERE or on image below.

The good news first: in Thompson’s remarks he says that many thousands of new jobs would result in Virginia, and the old idea of Presidents John F. Kennedy and Ronald Reagan – a “rising tide lifts all boats” – would happen in the Commonwealth with enactment of any of the several “scenarios” for how to use the revenue collected.  This increase would happen in spite of the crashing economy across America as conservative attempts to stop Obamacare appear to have failed.

Since his proposal is “revenue neutral – it will not increase taxes – he says conservatives and liberals alike should have no problem with the idea being proposed in his study.

Thompson emphasized several major points as he spoke of his proposal.  No change to healthcare services which would continue to be spared any sales taxes.  No new business to business tax.  End user taxes only would be affected.

The proposal Thompson spoke of does away with the gross receipts tax, among others.  Counties and cities revenue in Virginia does not change under this proposal.  The “constant” in the proposal is that services as well as products will be taxed.  The variable in the different scenarios, is how this tax revenue collected, will be left with business, so as to boost business revenue.

Mr. Thomson’s name for this tax increase is “broadening the tax base” so as to include those who provide services, rather than exclude them as is the case today.  That savings is then passed on to those who operate business, which will no longer face the current taxes.

Mike Thompson explained the various options at the October conference, which his organization sponsored at the Fairfax Marriott at Fair Oaks Mall, one of the four “upgrade” events of the past year thanks to their donation.

The October event was headlined as a “Conservative Change Conference” to discuss various changes offered by conservatives.

The Freedom Leadership Conference does not endorse candidates for office nor the proposals offered by organizations which sponsor each month’s conference.  The study done by the Thomas Jefferson Institute emphasized fairness, being revenue neutral, being sellable to both conservatives and liberals, and having the goal of a tax cut to boost business in Virginia.

It is business in America which invests for future business expansion – using profits to finance extra advertising, hiring of new employees, better physical plant such as equipment.  This is the very heart of the difference between capitalism and socialism, where government officials always speak of how they will invest tax dollars instead of letting investors and business owners with capital, do the investing.  Anything which reduces the tax burden of business will increase their profit and enable them to expand.  The proposal of the Thomas Jefferson Institute for Public Policy focuses on the simple fact that if you increase revenue available to business, then you will expand the economy and help everyone.

Some conservatives at the conference remained concerned that the proposal offered would mean an increase in taxes for many businesses which are not incorporated and offer services.  “Why should the consultant who comes to my small business to fix my broken computer, be taxed, while the big corporation down the street that my business competes with, has a full time employee doing the same work at his company, not be taxed?  It seems to give an unfair advantage to big business,” said this critic.

Thompson’s remarks, despite reservations by some attendees about instituting taxes on those providing services, were very well received at the conference, which his organization sponsored this past month.  Thompson has been involved in Republican politics for many years, and has also been an officer of the conservative youth group, Young Americans for Freedom, over 40 years ago.

The other principal speaker at the October Freedom Leadership Conference was Michael O’Neill, Assistant General Counsel of Landmark Legal Foundation, whose General Counsel, Mark Levin, recently wrote a new bestseller, “The Liberty Amendments.”  We will have a report on his enthusiastically received remarks in a future report. 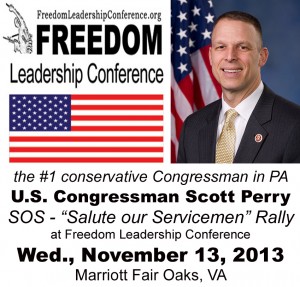 Congressman Scott Perry to be keynote speaker at November 13 Conference

Congressman Scott Perry will be keynote speaker at the post-Veterans Day “Salute to Our Servicemen” & “Save our Servicemen” rally of Freedom Leadership Conference on Nov. 13, 2013, sponsored this month by Uniformed Services League as a “post Veterans Day “Thank You” to American heroes who have served in the military.  Representative Perry is also a Colonel, U.S. Army National Guard & an Iraq war veteran and the Number One rated Congressman from Pennsylvania according to Heritage Action.  To read more details about this conference (a past article at this website) go HERE.

To register to attend the free conference ($5 suggested donation at the door) which begins with a 30 minute “social” time with coffee, tea and dessert, go HERE.

(Note: those who are Conference Members, or who wish to apply for complementary Provisional Conference Membership HERE, are also invited to join us for Dinner with Congressman Perry, 5 to 7 PM; advance registration and approval of your Membership Application required).

The Conference Board of Directors is reviewing suggested changes and will make a determination of whether to continue the monthly series of the Freedom Leadership Conference in 2014, or change to a quarterly conference, or return to the original annual format.  If your organization wishes to sponsor a monthly conference, which requires no fee or donation, you may write to EventCoordinator@FreedomLeadershipConference.org.  For those organizations which desire an upgrade location such as the Marriott Hotel sponsored last month by Thomas Jefferson Institute and again this month by Uniformed Services League, there is a donation (payable directly to the hotel) to make this possible.