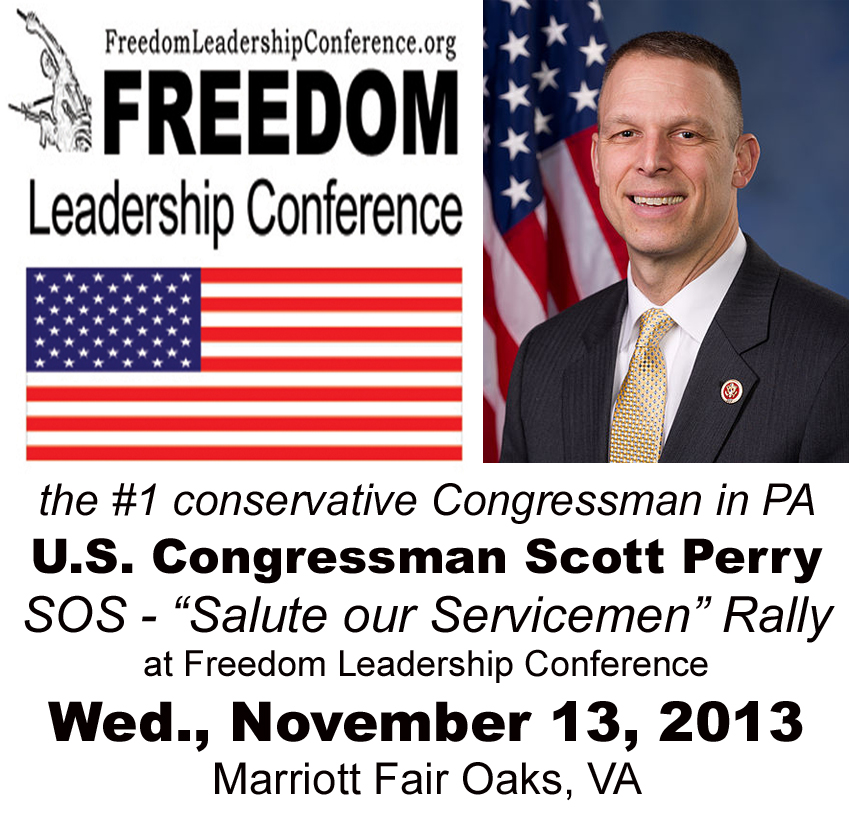 The Liberty Amendments of Mark Levin also on the Agenda

Congressman Scott Perry will be keynote speaker at the post-Veterans Day “Salute to Our Servicemen” & “Save our Servicemen” rally of Freedom Leadership Conference on Nov. 13, 2013, sponsored this month by Uniformed Services League as a “post Veterans Day “Thank You” to American heroes who have served in the military.  Representative Perry is also a Colonel, U.S. Army National Guard & an Iraq war veteran and the Number One rated Congressman from Pennsylvania according to Heritage Action.

The Conference will also feature a panel of retired Military Officers with Panel Moderator, Lt. Colonel Tim Hanigan, USMC (Ret.).  In addition, there will be a speaker on the subject of the Liberty Amendments proposed by popular conservative commentator Mark Levin, whose book by the same name is a national bestseller (speaker to be announced).  The Conference is free to attend, at the Fairfax Marriott Hotel Fair Oaks Mall, Virginia on Route 50 near I-66, with a requirement for advance registration and limited seating (suggested $5 donation at the door).  The private dinner with the Congressman and other guest speakers and conference leaders is only open to members.  Advance registration is HERE.

Conference sponsor Uniformed Services League explained, “With American servicemen facing the threat not only of enemy bombs and bullets wherever they are deployed around the world, they are also in danger from possible accusations of war crimes instigated by anti-America, leftist and pro-terrorist forces under the International Criminal Court.  Such trials would mean the traditional rights of American citizens would be denied any American so accused.”

The sponsor of the “SOS2” conference is Uniformed Services League, which notes that in addition to threats abroad to U.S. servicemen they face increasing threats in America.  The fact that American military bases are “gun free” zones encourages terrorists and lunatics to see this as a “safe zone” to murder American servicemen, as happened at Fort Dix, N.J. (2007), Fort Hood (2009) and more recently the Washington Navy Yard (Sept. 2013).  This makes a “Salute to Our Servicemen” and a “Save our Servicemen” rally on Nov. 13 all the more timely.

Congressman Perry was the keynote speaker at a picnic function of the Philippine-American Heritage Council of New Americans by Choice, a sponsor of the Freedom Leadership Conference this past summer.  He addressed the group about the upcoming debt battle with the Obama Administration and saluted those who made a sacrifice to come to America, and was very well received by the group.

With a career as a business owner and state legislator, first term U.S Congressman Scott Perry (GOP 4th District PA) has already become the top conservative in the Pennsylvania Congressional delegation with a strong 89% rating by Heritage Action.

He voted against the recent debt ceiling increase together with the overwhelming majority of GOP House members against the united front of all Democrat Congressmen and a minority of House Republicans.  He explained, “the legislation before us tonight is tantamount to accepting the failed policy of endless borrowing from China, Japan and the Social Security Trust Fund to satisfy an ever expanding government bureaucracy. I can’t support that.”

Scott began his military career in 1980 when he enlisted in the Pennsylvania Army National Guard. He attended basic training at Fort Dix, N.J., and graduated Advanced Individual Training at Fort Belvoir, Va., as a technical drafting specialist. He graduated as the president of his officer candidate school and was commissioned a Second Lieutenant in the Field Artillery branch. Lieutenant Colonel Perry served as the Commander of the 2-104th General Support Aviation Battalion,which deployed to Iraq from January 2009-January 2010. In February 2011, Scott was promoted to the rank of Colonel, and recently assumed garrison command of the Fort Indiantown Gap National Training Site.  He is a graduate of the US Army War College with a Master’s Degree in Strategic Studies.

A flyer (PDF) of the November “Salute to Servicemen” and “Save our Servicemen” Rally and Conference is HERE.