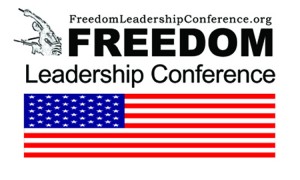 The 12th annual Freedom Leadership Conference will focus on the threat to America’s security and economy from Red China and from our policy failure to control our own borders.  At this juncture we regret that no one candidate running for President has adequately addressed these twin concerns.

American Border Control is hosting this year’s 12th annual Freedom Leadership Conference on Veterans Day, November 11, 2011 from 6 to 8:30 PM.  There will be no required admission charge for this year’s event, which will include a light dinner buffet for specially invited guests.

The major issue focus of this year’s conference will be divided into three broad areas to be covered by three different speakers.

First, the Red China threat at U.S. seaports.  The United States has given virtual free rein to our Red Chinese adversary at Pier J in California, to name just one example, enabling them to establish a virtual beachhead on the north American continent.  These seaport bases enable Communist Chinese controlled companies such as The China Ocean Shipping Company to function almost with sovereign immunity on American soil, as they assist other Chinese companies in flooding America with their own less expensive, government subsidized and government protected products.

Second, a speaker will focus on the issue of America’s “open border” with a continuing flood of illegal aliens who have now been given a virtual “backdoor amnesty” as announced by President Obama’s Justice Department under Attorney General Holder.  This action is in complete contravention of law, does an end run around Congress, violates the oath of office of both the President and the Attorney General to uphold and enforce the law (they are after all, called the “Executive Branch” of government).  Even worse is the proactive role of the federal government under the Obama-Holder team, where those states which actually attempt to enforce the law face costly litigation, most recently with Alabama.

Third, a speaker will focus on the broader threat of Communist China to the national security interests of the United States, with reference to the recent annual report required by Congress from the Pentagon.  The work of Congressmen Randy Forbes and Frank Wolf on this topic will be given special recognition, and suggestions will be offered as to how we may best support their outstanding efforts in this area.  An American Border Control legislative team has already met with Congressman Wolf to extend our appreciation to him and exchange views on this important topic.

Each of our three principal conference speakers will focus on their topic for a total of 30 minutes.  Their first 8 minutes will be videotaped for use on Youtube and the final 8 minutes of this time will be available for questions by conference participants (lead by conference Sponsors, Benefactors and Patrons who may lead off if they choose).

The question of which candidate for President best addresses the “Border Control” issue will be addressed by those Sponsors, Benefactors and Patrons who may choose to speak to this topic.

A “statement of principles” called “The Thurmont Statement will be adopted at the conclusion of the Conference just before 8:30 PM, to be read by Conference Sponsors, Benefactors and/or Patrons who wish to do so.  This statement was originally adopted at the Freedom Leadership Conference of November 11, 2009 and read by one of the co-authors of the statement, Quin Hillyer, columnist and writer.

We have invited a select group of retired Americans to join us at this conference, and will honor those among the group who are American military veterans on the occasion of this Veterans Day, November 11, 2011.

We wish to encourage frank and even robust discussion and even debate among like minded and seriously committed conservative cause donors and activists with a proven history of helping to influence public policy.  That is why this is an “invitation only” event this year at the discretion of this year’s host, American Border Control.

To read the Thurmont Statement and make suggestions, click HERE.

To request an invitation to the Conference, write ConferenceChairman@FreedomLeadershipConference.org and provide a link to your facebook page and/or a bio/resume or brief description of how you have in the past supported the conservative cause, over what time period, and whether you support the principles identified in The Thurmont Statement.