The threat to America’s security and economy from Red China and from our policy failure to control our own borders was the focus of the 12th annual Freedom Leadership Conference on Veterans Day, November 11th.  Hosted this year by American Border Control (ABC), the annual Freedom Leadership Conference (FLC) has been held in southern California, Miami, Florida and for the past three years in Thurmont, Maryland before this first time being hosted in Northern Virginia.

Jon Moseley, the Executive Director of American Border Control, was the kickoff speaker focusing on the issue of America’s “open border” with a continuing flood of illegal aliens who have now been given a virtual “backdoor amnesty” as announced by President Obama’s Justice Department under Attorney General Holder.

This action is in complete contravention of law, does an end run around Congress, violates the oath of office of both the President and the Attorney General to uphold and enforce the law (they are after all, called the “Executive Branch” of government).

Even worse is the proactive role of the federal government under the Obama-Holder team, where those states which actually attempt to enforce the law face costly litigation, most recently with Alabama.

In fact, Jon Moseley’s opening remarks, called the Obama Administration’s “legal assault” a virtual “war against the states.”  ABC Executive Director Moseley noted that 16 foreign countries have now joined the Obama Administration in this war by filing a “Friend of the Court” amicus curiae legal brief demanding unrestricted access for their citizens to the American homeland.  The video of these remarks can be found in three parts here:

Obama’s War Against the States, Freedom Leadership Conference (pt 1 of 3)

Obama’s War Against the States, Freedom Leadership Conference (pt 2 of 3)

Obama’s War Against the States, Freedom Leadership Conference (pt 3 of 3)

Jim Logue, Executive Director of United States Intelligence Council (USIC) spoke next on the broader threat of Communist China to the national security interests of the United States (see link above for part 1 of vid). 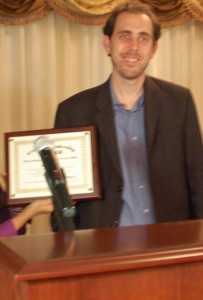 cus on Communist China’s development and the recent “sea trials” of a new aircraft carrier to challenge open sea lanes which the United States Navy has helped keep open in the past.  Jim Logue, a political consultant from New Jersey, also accepted the “Freedom Leadership Award” (see photo) for this, his first prepared remarks in behalf of USIC, presented to him by the Chairman of United States Intelligence Council and the Master of Ceremonies of the Freedom Leadership Conference.  The video of Jim’s remarks have been placed on youtube in two parts:

There were also presentations by Rick Buck and Bob Bowers, who reported on their recent briefing of Northern Virginia area U.S. Congressman Frank Wolf’s office in Washington, DC, led by Kevin Carlin to round out this USIC legislative team.  The USIC legislative team reported that Congressman Wolf has been a very effective spokesman for the idea that America is not sufficiently responding to the increasing threat to America’s security posed by Communist China.

This 12th Freedom Leadership Conference closed out with another presentation by Jon Moseley, ABC Executive Director, about the Red China threat at U.S. seaports.  American Border Control was recently called “United States Seaport Commission” because this was its original focus.  The United States has given virtual free rein to our Red Chinese adversary at Pier J in California, to name just one example, enabling them to establish a virtual beachhead on the north American continent.

These seaport bases which literally ring America, enable Communist Chinese controlled companies such as The China Ocean Shipping Company to function almost with sovereign immunity on American soil, as they assist other Chinese companies in flooding America with their own less expensive, government subsidized and government protected products.  More details on this and other projects of American Border Control can be found at their website HERE.

Retired American military veterans were especially honored at this FLC with remarks by Rev. Donald E. Friedly, himself a military veteran on the occasion of this Veterans Day, November 11, 2011.

This 2011 Conference adopted for the third time, the slightly revised statement of conservative principles originally drafted and then adopted at the 2009 Conference in Thurmont, Maryland from an article originally written by Quin Hillyer, a senior editor at the American Spectator, for full text click HERE.  Hillyer attended and did the reading of that first “THURMONT Statement” on November 11, 2009.

The Freedom Leadership Conference has evolved to become a gathering of established conservative leaders, supporters and activists who work together to plan future activities in support of a conservative public policy agenda.  To request an invitation to future Conference events, write to ConferenceChairman@FreedomLeadershipConference.org.