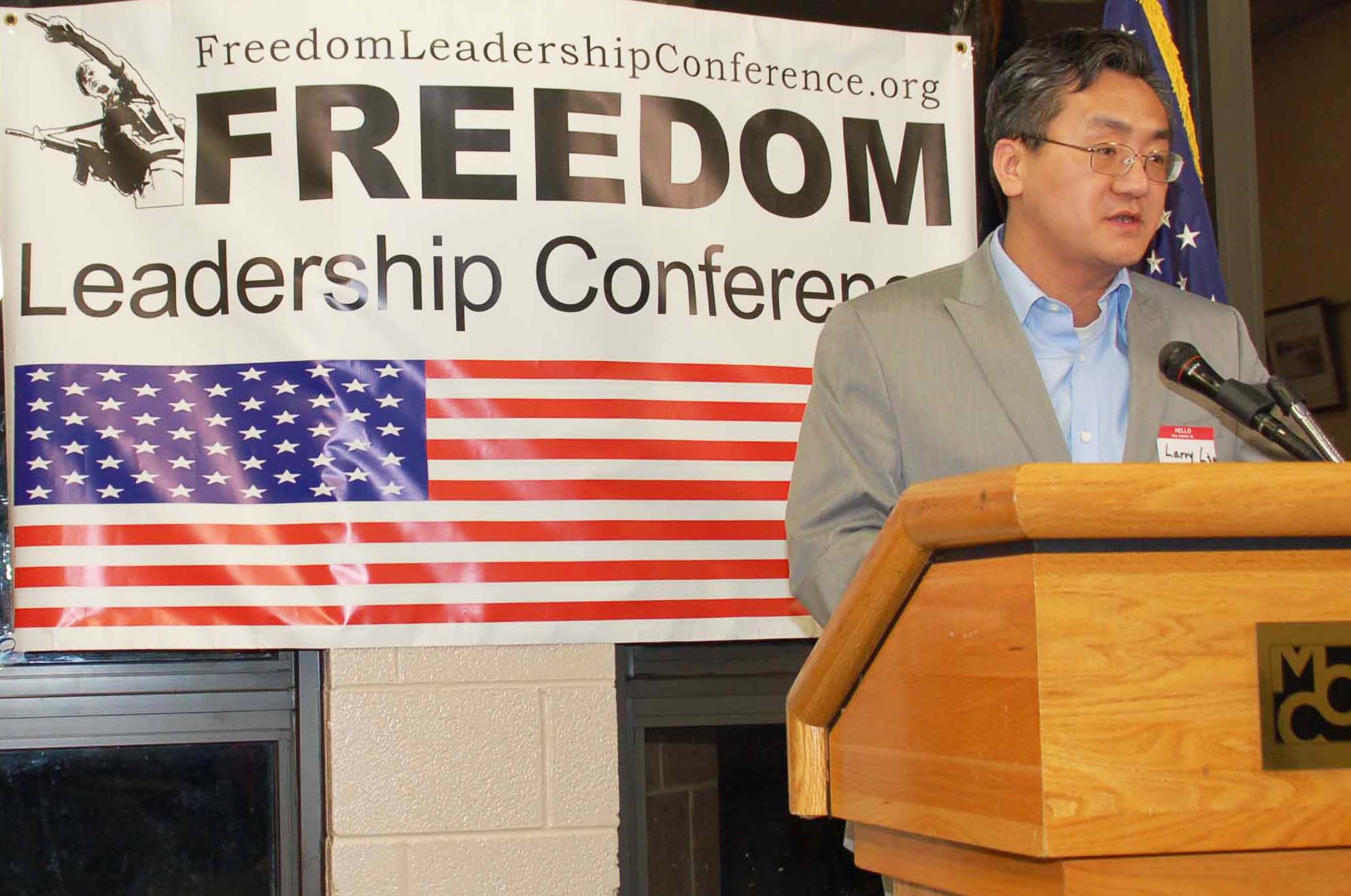 Dr. Larry Lie spoke out against the brutal persecution of people of faith, especially Falun Gong, in Communist China at the Feb. Freedom Leadership Conference, and returns for major remarks and to unveil the movie Free China: the Courage to Believe, at the 9/11 Conference.

Dr. Larry Liu will speak for the persecuted Falun Gong practitioners in Communist China next Wednesday, September 11 at the Freedom Leadership Conference sponsored this month by GrasstopsUSA and U.S. Intelligence Council in Springfield, Virginia.  He will introduce the movie produced by New Tang Dynasty TV, Free China, The Courage to Believe, where he is a Senior Associate.

Liu spoke at the February Freedom Leadership Conference sponsored by GrasstopsUSA, explaining the plight of Falun Gong, the largest organization in China – even larger than the Communist Party.  The video is HERE.

Dr. Liu will help introduce the documentary movie that tells the story of the brutal persecution, suppression and torture of people of faith in Communist China.  More than half of those imprisoned for their faith in Communist China are Falun Gong practitioners – and their forced labor in concentration camps produces many of the inexpensive products sold by Communist China to Americans and westerners to help finance their massive military buildup.

The video trailer can be viewed above or HERE.

Dr. Roger Canfield of Sacramento, California, the former Executive Director and now the Vice President of U.S. Intelligence Council (USIC), which was the primary organizer of the Freedom Leadership Conference in 2001 when it was being held as an annual event in California and called Western Conservative Conference, will also address the 9/11 conference.

USIC is a sponsor of this September 11 conference.  Dr. Canfield, who has spoken at the original conference for its first three years in California (2001-03), originally recommended this movie to the Conference after seeing it in California.

Dr. Canfield wrote two books published by U.S. Intelligence Council on the Red China subject, distributed by the Council to over 1 million Americans.  More recently he is the author of Comrades in Arms: How the Ameri-cong won the Vietnam War against the Common Enemy – America.

A second 9/11 conference sponsor is GrasstopsUSA, which sponsored the February conference at which Dr. Larry Liu originally spoke.  Christopher Carmouche, their President, will deliver the wrap up remarks after the movie is ended on September 11.  He spoke on the Benghazi subject at the Conference in February, 2013 (see his keynote remarks HERE or the video HERE).

Dr. David Tian, who immigrated to the U.S. in the early 1990’s and earned his Ph.D. from UCLA in 1999, will also speak to the conference.  Dr. Tian will focus on Communist China’s Cyberwarfare on its own citizens and why this should concern Americans.  Dr. Tian is a founding member of the Global Internet Freedom Consortium (GIFC) and has focused on methods to overcome such internet censorship.

Can you imagine having a knock on your door in the middle of the night within several hours of your “googling” the word “freedom” – and then having to spend years at a concentration camp doing forced labor or worse, having your body used for “organ harvesting?”  That is the plight of Falun Gong practioners – fellow people of faith, with more than half of concentration camp prisoners of conscience drawn from this group.

There will be remarks at the Conference by Herbert W. Stupp, a director of the Freedom Center Foundation, also an original primary sponsor of this Conference 14 years ago and which continues as a sponsor of the new monthly series.  Stupp, a longtime conservative activist, leader and spokesman, will focus on commemorating 9/11, speaking to the conference from New York City via internet audio and video.

The “movie night” is a first at Freedom Leadership Conference, with the doors open for the movie at 8:15 PM at the West Springfield Government Center Community Room, 6140 Rolling Road, Springfield, VA 22152.  There is no membership requirement or fee to watch the movie, but advance registration is required because there is a strict limit of 60 seats.  You may reserve your free movie seating HERE.

For those who wish to attend the Freedom Leadership Conference which begins at a nearby restaurant one hour earlier you must first make Provisional Membership application HERE and then register to attend HERE.  There is a suggested donation of $5 at the door to help defray conference expenses including the coffee and tea service which begins at 7 PM.  The “mini” conference is at Milano’s Family Restaurant, 6230-G Rolling Rd., Springfield, VA 22152.

For those who are already Conference Members there is a dinner with the speakers, from 5 to 7 PM (dinner served at 5:30 PM sharp), advance registration required HERE, with the location at Milano’s Family Restaurant, 6230-G Rolling Rd., Springfield, VA 22152.

The Thomas Jefferson Institute for Public Policy, which will be the sponsor of next month’s conference on Thursday, October 17, will have its President, Michael Thompson, attending this 9/11 conference to make informal remarks at dinner and to deliver an advance report on his plans for next month’s function.

This month’s conference has two “firsts” at this, the 10th of the new monthly series of the Freedom Leadership Conference begun in late 2012.  First, there is a free movie night.  Second, you may bring guests and there is no membership requirement to attend and watch the movie.   Because of the number of speakers connected to this month’s topic there is an abbreviated “mini” conference before the movie, from 7 to 8 PM for members only.

The November 12 Freedom Leadership Conference will be sponsored by Uniformed Services League as a “Save our Servicemen” Rally and to honor American veterans.

We urge freedom lovers within drive distance of Northern Virginia to come to this movie, commemorate 9/11 with courage, for freedom, and bring guests.  A flyer/poster has been created to help you do this, HERE.