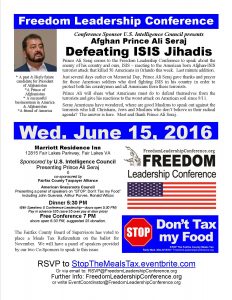 The Father is just as Crazy an ISIS Terrorist Supporter as the Son, says Afghan Prince Ali Seraj

Our keynote speaker for the Freedom Leadership Conference this Wednesday nite released a statement today in which he suggests that the entire family of the native born American of Afghan ancestry who killed the largest number of Americans on U.S. soil since 9/11 should be deported back to Afghanistan because the father is just as crazy as the murderous and now shot-dead son.

Afghan Prince Ali Seraj, who will speak Wednesday night in behalf of Conference Sponsor, United States Intelligence Council, is a possible future President of Afghanistan, who said today, “The US Authorities must show those seeking asylum in the USA that to be a Citizen of this great nation, is a privilege not a RIGHT. And if they abuse that right, then they have no place in this nation and must be deported.”  Tickets are still available for the free conference but the advance-RSVP requirement will be strictly enforced.  A limited number of dinner tickets are available for the small private dinner with Prince Ali Seraj and the other conference speakers HERE.

The statement of Prince Ali Seraj is headlined “Evil Begets Evil” and he lays the blame for the murder of 50 Americans and the wounding of over 50 more clearly on ISIS, unlike President Barack Obama and his allies who now blame this act on “homegrown terrorism” as if it has no connection to ISIS.

Nor does Prince Ali’s statement in any way mention the fashionable solution to terrorism – that we must all “condemn hatred” and take away Americans right to protect themselves under the second amendment.”

The only hatred that Prince Ali Seraj condemns, unlike President Obama, is the hatred of ISIS, which he say spreads “the poison of a snake” which has infected both the father and the Orlando shooter he labels a “lunatic.”

We commend and thank Prince Ali Seraj for his splendid and supportive statement of strong support for America and the sympathy and compassion he extends to the Orlando victims of this murderer.  Unlike so many so-called leaders on the world state, including our own President, Prince Ali Seraj does not equivocate or mince words in his condemnation of the ISIS jihadi lunatics who spread “the poison of a snake.”

We strongly urge our friends and readers to attend the Freedom Leadership Conference this Wednesday to listen to Prince Ali Seraj in person and if possible we suggest you come early to have dinner with him and the other speakers.

The United States Intelligence Council, originally one of the three conference co-sponsors, upgraded to full Sponsor level ($500 instead of $250) which gave them the right to name the conference Keynote Speaker. 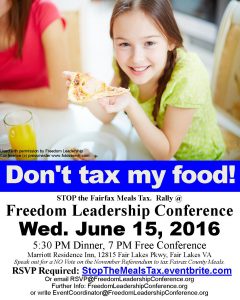 The two co-sponsors are presenting speakers in opposition to the proposed meals tax: Conference Co-Sponsors Fairfax County Taxpayers Alliance and American Grassroots Council are providing speakers for this segment of the conference.

Read the story where we announced Prince Ali Seraj as our keynote speaker, Possible Future President, Afghan Prince to Speak to June 15 Conference after Afghan ISIS Terrorist kills 50 in Orlando