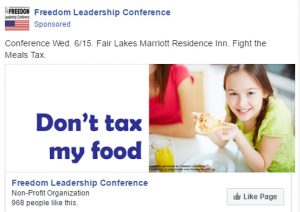 The “pizza girl” ad campaign “Don’t tax my food” which drew the ire of the pro-tax group.

Freedom Leadership Conference is braced with extra security after threats to crash the gate emerged from the pro-meals tax forces in Fairfax, Virginia.  While claiming they merely want us to “listen to each other” they urge their supporters to attend our event, report back to them what we are doing, and imply that we are working to “rev the engines of (a) misinformation campaign” to “cause serious damage to this effort” to raise a tax on meals in Fairfax County, Virginia.  Only those who advance-RSVP will be admitted to the free 7 PM Conference or the pre-Conference dinner with the speakers (reserve HERE).

“We will strictly enforce the requirement that all who wish to attend must have sent an advance RSVP to our Eventbrite page or made a reservation directly by phone or email exchange with one of the conference organizers, said a spokesman for the Conference.  The Conference final online reservation page deadline has been extended until 11 AM on the day of the event to accommodate our last minute expected rush of attendees.

Since the pro-tax forces were kind enough to actually run our “Pizza Girl” Facebook post and the link at their Facebook page (in order to criticize us of course) we will return the favor for those who want to directly check the source of our information or learn about our opponents’ views, visit them here: Fairfax Meals Tax Dine Out .  We would greatly appreciate a discussion on their page, or on our Facebook page.  They have in fact, visited our page to make their pro-meals-tax argument – which we have rebutted.

On their website, the pro-meals tax forces argue that we do “not seem to realize” that their proposal calls for “levying a modest surcharge on dining out.”  But in the same section they go on to speak of all of the money they will be able to raise with their meals tax, totally contradicting themselves.  If it is such a “modest” tax then how will it raise such enormous sums of money, pray tell?

While we do not see a great influx of support from the restaurant community which we had hoped would join us at this event to stand up and defend their industry from this tax which singles them out, will suppress their growth and will especially hurt the most vulnerable members of society, this push to have liberals who oppose us infiltrate what is billed as a private conference, is somewhat of a surprise.

Clearly their purpose is not to learn why they are wrong, but to argue and confront and demonize those of us who don’t agree with them.

Of course, this should not be a total surprise to conservatives, that liberals so often when challenged, seek to suppress or demonize those they do not agree with.

Look at “Occupy Wall Street” which seeks to label all business as if they are all “the rich” and the “millionaires and billionaires” enslaving the poor common man which of course, they (pretend to) speak for.

And look at the recent weeks and months efforts to attack Donald Trump functions.  Those Trump rallies have repeatedly turned violent while the organizers deny any wrongdoing and refuse to accept responsibility for what the followers who answered their call-to-arms to “protest” do to us conservatives trying to express our own free speech rights.

We welcome dialogue but think it would be better if the pro-tax forces were to call a public meeting and invite any of our speakers to stand before their supporters to share the facts they are not getting.

How about their inviting Fairfax County Taxpayers Alliance (FCTA) President Arthur Purves, American Grassroots Council (AGC) and Northern Virginia Tea Party organizer Ronald Wilcox, Fairfax County Board of Supervisors Member Pat Herrity and former GOP nominee for Board of Supervisors John Guevara, to their event instead of trying to persuade their supports to “gate crash” our event this Wednesday?

The third co-sponsor of this conference, United States Intelligence Council, just several days ago upgraded their conference participation to full SPONSOR level in order to name as the keynote speaker, Prince Ali Seraj, see previous story about this potential future President of Afghanistan and staunch friend of the United States.

Last chance to book an advance reservation – strictly required and to be strictly enforced – is hereby announced, deadline extended to 11 AM on the day of the Conference, Wed., 6/15/16, go HERE.

And we repeat: our long-standing policy that only those who have done an advance RSVP and can identify themselves (photo ID) will be admitted to the free conference or the dinner.