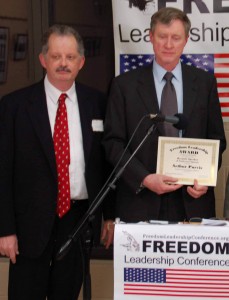 The keynote speaker of a recent Freedom Leadership Conference, sponsored by the Fairfax County Taxpayer Alliance (FCTA), also delivered supplemental remarks about how we as a society can best avoid the growing and unsustainable debt and build a better American society.

FCTA President Arthur Purves, explained why a belief in God is really the ultimate answer for American society, and his remarks (video HERE and photo above) are a perfect introduction for the August 21, 2013 “Conference for People of Faith” (reserve your place at this free conference HERE).

Spending is out of control at the federal, state and local levels in Fairfax, Virginia, he asserted at the March conference.  What has happened to us which has helped cause this growing catastrophe?

Purves says that we have lost some of the will for self-sufficiency that we used to have.  Too many people think they cannot exist without government financial support.  Why is Christianity the answer to this problem, Purves asks?

Christians with their belief system founded this country and led us to keeping our freedom through all the wars and disasters we have faced from the very start of this nation.

He cites founding fathers who explained the First Amendment as having the purpose not of removing Christianity from American public life but of assuring that the government would not take sides between the various sects or churches of Christianity.

Christianity provides a sense of accountability and of justice, Purves explained.  People feel accountable to a higher authority and behave accordingly with such a strong belief system.

Christianity provides hope for eternity instead of only dwelling on the present.  The Ten Commandments of Christians and Jews give a stronger reason for good behavior than any threat of punishment by the state.  And prayer gives people a constant reminder of the self-imposed requirement to be a good citizen and strive for best behavior.

Christianity has also been the greatest influence for tolerance in the history of the planet.

We can even look to Christianity for advice for the modern day Republican Party, where we were commanded to be the salt of the earth, and that without salt we are nothing.  That means plainly, that we are required to stand for positive good, and it is advice that Republicans might wish to consider.  This belief was cited as one of the reasons that the Washington Post used to endorse his opponent when he ran for public office in the past.

Allowing prayer in public schools and the 10 Commandments would put a positive influence on our children and our nation’s future.

In summary, Arthur Purves’ supplemental remarks, went beyond his role as President of the Fairfax County Taxpayer Alliance to shared his own personal beliefs about the role of God in public life in America.

The full text of the Purves keynote remarks at the March 27, 2013 Freedom Leadership Conference are available HERE and the video can be viewed HERE (there is no text for these supplemental remarks).

Next month’s conference is scheduled for August 21 at 7 PM near Fairfax City, Virginia, at a location provided to those approved for membership and attendance.  New “Provisional Membership” application can be made HERE.

A Conference for People of Faith set for August 21

The August 21 Freedom Leadership Conference features Pennsylvania State Representative Stephen Bloom, author of “They’ve Crossed the Line: A Patriot’s Guide to Religious Freedom.”  It will be sponsored by Birthmother Ministries, which helps women with troubled pregnancies.  The President of Birthmother Ministries, Jim Wright, will also deliver keynote remarks to the conference.  Read the recent article about this coming function HERE.

Rep. Bloom will have a limited supply of his book available for purchasing and autographing at nearly 40% discount off the regular price it sells for at Amazon, with priority to those who attend the dinner, and those who advance reserve (just check a box at the RSVP website) their book (only $10).

To reserve your spot at this members-only Conference which begins at 7 PM (and check the box if you want the book held for you), click HERE.