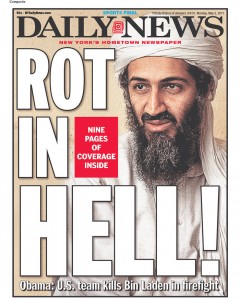 “The face of evil,” Osama Bin Laden, may be dead but his followers have increasing influence within the United States and the keynote speaker of the June 12 Freedom Leadership Conference, noted counter terrorism expert John Guandolo, will name some of them this Wednesday.

Freedom Leadership Conference keynote speaker John Guandolo will list names of individuals and organizations who are helping spearhead what he calls the “Global Islamic Movement” attack on the United States from within our borders this Wednesday at the Freedom Leadership Conference to be held in Fairfax, Virginia.  He will be specific and he will conclude with a call to action at this private , monthly conference for leading conservative activists and donors, now in its 14th year with nearly 60 past conservative cause sponsors.

For example, one of those to be named by Guandolo “sits on the Department of Homeland Security’s Advisory Council, advises the National Security Council, works with the Secretary of State, moderates panels at conferences at CIA Headquarters, and has received awards from the FBI.”  He will be named along with his OTHER affiliations not so broadly advertised by this individual: President of the largest Muslim Brotherhood associated organization in North America.

This is the face of radical Muslim Jihad, dedicated to imposing Sharia Law on every country on earth, including the United States, and killing Americans, especially Christians and Jews, who stand in their way, according to one of America’s foremost counter terrorism experts.  As cited in our last article on this subject, Catholic Church officials have recently announced that there are now more than 100,000 Christians killed every year in the world because of their faith.  Jihad and “Sharia Law” are spreading and has arrived in the United States.

Guandolo will spell out what he has learned from his many years of studying those who hate America and are working to “transform” America – telling the Wednesday evening conference about the “detailed strategy, a detailed plan to implement their strategy…” and “exactly what they intend” as this “Global Islamic Movement” continues to “work with local school boards, at State Houses and at all levels of the federal government.”

Guandolo will also speak of those who respond to the growing body of evidence and the increasing number of Americans who are alarmed at these developments by attempting to silence and ridicule those carrying the message.

John Guandolo himself has been repeated targeted with ridicule and with attempts at character assassination for his work, but he has pressed on, creating a special website to share some of what he has learned – click HERE for his “understanding the threat”.

The June 12 Freedom Leadership Conference is co-sponsored by Guandolo’s “UnderstandingTheThreat.com” and by United States Intelligence Council.

The conference is an “invitation only, private, members only” function for “full spectrum conservatives” who regularly volunteer their time for the conservative cause and/or organization of their own choice.  There is usually a “lightning round” to allow for a select number of conference attendees to announce and explain the causes and/or organizations that they have been working on and support.  If you are not already a conference subscriber (to receive the twice monthly Freedom Digest newsletter or member you may request a Provisional (temporary) membership to attend one meeting by writing to RSVP@FreedomLeadershipConference.org.

The July 17 Freedom Leadership Conference will be sponsored by American Border Control to discuss the question of whether to “Legalize Illegals” with their Executive Director Jon Moseley as one of the featured speakers.  Jon will also announce the formation of a new “NobamaUSA” initiative sponsored by Americans Against the Obama Agenda.

David Denholm, President of Public Service Research Foundation, will attend the dinner to discuss the tactics of Saul Alinsky against conservatives, and whether there is a monthly “Saul Alinsky Smear Conservatives” award to be announced.  To nominate a particularly hateful example of a leftist smearing conservatives you may write to LeftSmear@FreedomLeadershipConference.org.