Those who advocate violent Jihad against America are gaining ground across the country and in Northern Virginia, according to one of the recent speakers at the monthly Freedom Leadership Conference, a private function for volunteer conservative activists and donors.

For previous article about the June 12 conference, see:

“Homegrown Jihad Threatens America from Within to be addressed at June 12 Conference in Northern Virginia;  Noted Counter terrorism expert John Guandolo says from Benghazi to Boston, America is now under attack from within” (recent article HERE). 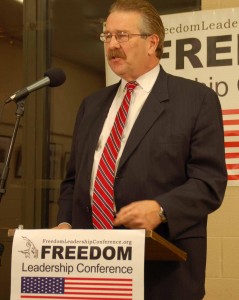 Jim Lafferty of the Virginia Anti Sharia Law Task Force spoke at the 3/27 Freedom Leadership Conference on how Sharia Law is advancing in America, a topic which will be covered in more detail at the June 12 event featuring John Guandolo as the keynote speaker

Jim relayed ominous developments when he and his wife Andrea, attended a meeting of the Fairfax county board of supervisors over a year ago to object to the expansion in Northern Virginia of training centers for anti-America Jihad or “Sharia.”

Lafferty’s wife Andrea is the daughter of Rev. Lou Sheldon, and a leader of the Traditional Values Coalition (TVC) he founded many years ago.  TBC is a past sponsor and founder of the Freedom Leadership Conference back when it was being called the Western Conservative Conference 14 years ago.

Jim and his wife Andrea, he explained at the conference, attended the County meeting to complain about an Islamic academy which was located on county property, and to object to their continuing the lease of county property.  He said he had to listen to insulting language from the Chairman of the County Board of Supervisors (a Democrat), who claimed that Jim was slandering Islam by objecting to the pro-Jihad academy.

If you are not familiar with Sharia Law, Jim said, it is simple.  “Anyone who slanders or even mentions Islam should be beheaded.”

To back this up, we report to our readers that Archbishop Silvano Tomasi, the Vatican’s permanent observer to U.S. agencies in Geneva, reported to the Human Rights Council on May 27 that more than 100,000 Christians are violently killed because of their faith every year.

The Catholic newspaper Our Sunday Visitor reported one example in Nigeria, where the local anti-Western, Islamist movement “massacred Christians in a campaign to impose Sharia nationwide.”

Jim’s point at the conference was that when he was accused of “libeling” Muslims, he was actually being targeted for death, since that is the penalty for criticizing Muslims under Sharia Law – which its adherents believe supersedes any civil or American law.

Lafferty reported that he had a few people attending with him at the first meeting of the Fairfax County Board of Supervisors he attended.  But as the expansion of the Muslim Mosque continued to be considered this grew to several thousand who objected – and who were therefore also putting themselves at risk.

Even though the anti-Sharia law crowd’s efforts in Fairfax County failed, Lafferty noted that the Board did vote to refuse permission for additional expansion, so all those people who stepped forward did accomplish something.

And, the final outcome at the County Board of Supervisors, Laffert reported, was only lost at the end by a single vote, with one Supervisor changing his vote on the last day against his proposal to refuse the use of government property for Muslim advocates of Sharia.

What do they teach at the Mosque which Jim Lafferty and his supporters objected to?  Hatred of Jews and Americans.  Hatred of the American system of government.  Belief in a foreign philosophy that pits them against Christians and Jews.  For example, Lafferty reported, the maps in their Mosque school have one country missing: Israel.  That’s because their goal is to destroy Israel and kill Jews.

“I live in an area that is a center of Islamic terrorism,” said Jim Lafferty.

Lafferty’s remarks at the March 27 conference, advancing the theme to be expanded at the June 12 conference by John Guandolo, are that advocates of violent Jihad are already in America right now.

Don’t talk to the FBI?

“Terrorists who have actually attacked America have attended Mosque in my neighborhood.  You can see coffee shops where they have had meetings.  You can see posters telling you, ‘don’t talk to the FBI.’  Whoever thought you’d see this in USA?  Had someone doing video with me a year ago, said Lafferty, and the kids at the mosque all yelled out at us, FBI, FBI, when they saw the cameras.  I have had my life threatened several times.  Have actually had someone visit our house just to make a death threat against me to my wife.”

Jim’s biggest complaint at the conference, is that in Northern Virginia a lot of the politicians seem very willing to accept this expansion of Muslim Jihad in our midst.  “Only one politician has stood up with us, and that is Rep. Frank Wolf” he said.  Democrats and Republicans alike are either intimidated or bought off by campaign contributions, he believes.

Council on American-Islamic Relations (CAIR) people who reside in this area are actually HAMAS operatives in the USA, said Lafferty.  They are always at the ready to excuse violence against the US and Israel.  They are operatives for the enemies of America, right here in our midst.  People need to take a stand against Sharia expansion, said this conference speaker.

Look at local elections at who is taking a stand on issues like Sharia, said Lafferty.  Many candidates will avoid this topic at all costs for fear of offending their Muslim supporters and contributors or fearing a negative “bias” article or story in the news media about them.   Those who are with us should ask local elected officials their personal sentiments about the continued existence of Israel.  This includes many Republicans and many conservative Republicans who are simply afraid of what has become a very strong political block in America and in Virginia.

Any time any planning commission blocks an expansion of a building permit for Sharia law advocates you can bet you’ll be hearing all kinds of complaints and you will be hearing from the US justice Department to investigate you, said Lafferty.

You can see a “terror tour” of places in northern Virginia such as where the blind sheik operated out of, who planned the first bombing of the World Trade Center in NY and many other now infamous advocates of Sharia, he said.

The June 12 Conference is sponsored by John Guandolo’s UnderstandingTheThreat, and by United States Intelligence Council.  To attend this private, members only conference on June 12 or in the future, write to RSVP@FreedomLeadershipConference.org.

There remain two conference dates open for a conservative cause organization to be the sponsor (no fee or charge) and provide the keynote speaker for 2013.

This entry was posted in Announcements, Post Conference Reports. Bookmark the permalink.