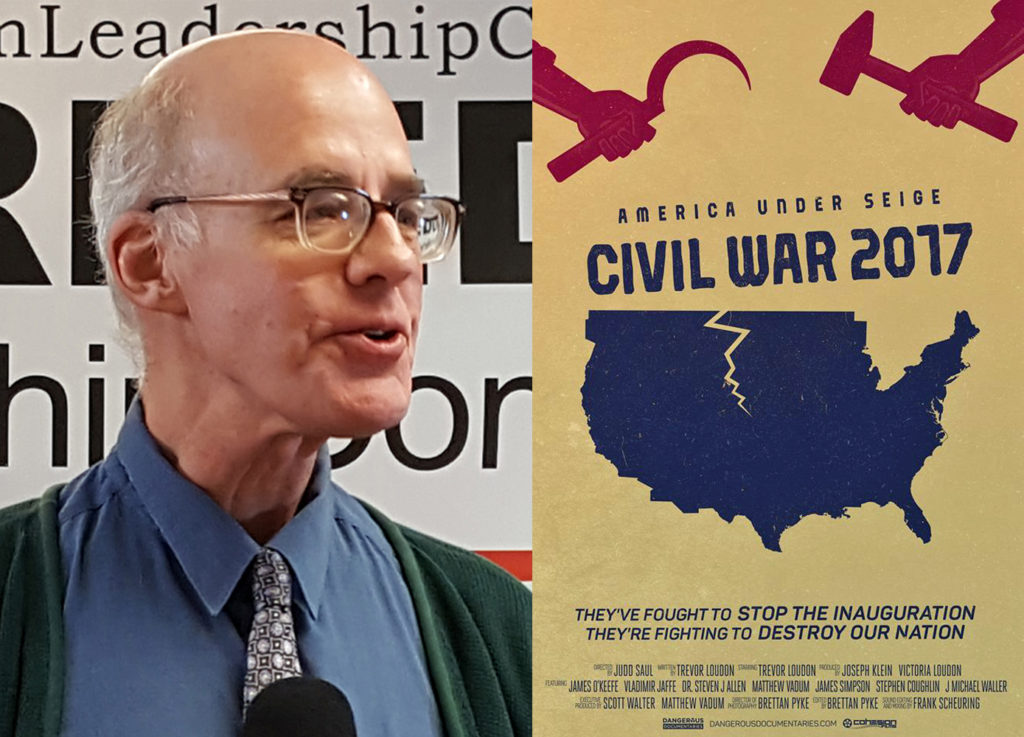 Dr. Steven Allen appears in the new documentary movie, “America Under Siege: Civil War 2017” that was just released at CPAC, will tell us about it at the Thursday 3/16 Freedom Leadership Conference.

The featured speaker being presented by co-sponsor  Capital Research Center at the Freedom Leadership Conference, Dr. Steven Allen, will focus on the political groups behind the protests and attacks on President Donald Trump and the core beliefs of conservatives who elected him and will “follow the money” to show their funding sources and goals as one of three speakers next Thursday, March 16 at the Freedom Leadership Conference at the Wingate by Wyndham Hotel off Rt. 50 near Rt. 28 in Chantilly, VA (conference advance registration required, $5 at the door, HERE).

Dr. Allen’s remarks will come the day after a “Day of Action” march on Washington DC, at which Senators Mike Lee, Rand Paul, Ted Cruz and Rep. Jim Jordan will be featured speakers followed by visits with your Senators and Congressmen to press for the full repeal of Obamacare, lower taxes and for the Senate to confirm Judge Neil Gorsuch for the Supreme Court.

The Wed., March 15 event in Washington, DC is being organized by Tea Party Patriots and FreedomWorks with the endorsement and support of Americans for the Trump Agenda, which is again a co-sponsor of this Freedom Leadership Conference.

Once again the major news media gave gavel-to-gavel coverage of another leftwing assault on President Donald Trump and the core beliefs of American conservatives, this time yesterday as a “Day without Women.”  It was nothing more than a continuation of the series we saw protesting the inauguration of President Donald Trump.

Their goal is nothing less than the destabilizing of the administration of Donald Trump, the federal government of the United States.

Our featured speaker appears in the documentary announced at the recent Conservative Political Action Conference, America Under Siege: Civil War 2017 which includes Trevor Loudon, James O’Keefe and inside reports on the extreme leftwing organizers of mass protests and violent demonstrations and riots.

Attorney Jon Moseley, one of the speakers next Thurs. March 16, has been a frequent FLC speaker, shown here with Corey Stewart and Delegate Bob Marshal on Aug. 2, 2010.

The battle with the left is not new.  Nor are their tactics of violence, attempts to intimidate, marginalize and suppress conservatives.

Dr. Allen will summarize the findings of his research on the recent efforts of the left to give the impression that they represent the majority, even as they use proven revolutionary tactics to wear down and weaken the real majority of the American people who want to give President Trump and the new Republican majority in Washington a chance to govern.

Their goal is to “demonize the opposition” says Dr. Allen in this hardhitting documentary.  He’ll have a lot more to say about this next Thursday at the Freedom Leadership Conference.

Also speaking will be attorney Jon Moseley in behalf of a 2nd conference co-sponsor, Americans for the Trump Agenda, who will speak about the source of money for leftwing campaigns and initiatives  – as revealed in Peter Schweizer’s book and video of the same name last year, Clinton Cash.

Jon Moseley, Esq., an attorney in private practice in northern Virginia for 19 years, works frequently for Freedom Watch with Larry Klayman on government reform and transparency litigation, has been a conservative radio talk show host, Executive Director of Americans Against the Obama Agenda and American Border Control.  He has been a speaker each year for the past 6 years at Freedom Leadership Conference.

The original on that topic is the book China Doll: Clinton-Gore and the Selling of the Presidency from 2000, a book which reached over 500,000 Americans.  Dr. Roger Canfield, the Sacramento, California based co-author of the book, was Executive Director of the book publisher, U.S. Intelligence Council (USIC) and is now Vice President of this conference co-sponsor, an original founding primary sponsor 18 years ago.

USIC Project Director Richard Buck will summarize the findings from this 2000 book, which first documented how Communist China was intervening in the U.S. presidential campaign of 2000 as well as Senate and House races and in the public policy process in the United States.

When you hear about the unsupported claims that Donald Trump was helped by Russia, it is this conference next Thursday that will show you who should be further investigated – where are they getting their money, what are their goals in America and will we finally enforce the law against those who would tear our country apart to thwart the 2016 election results?