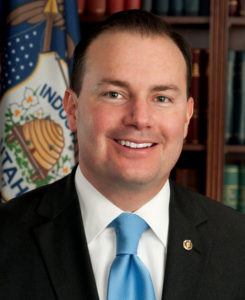 “Let’s pass the 2015 repeal bill that Republicans in both houses of Congress voted for .” (Senator Mike Lee)

Senator Mike Lee, one of the three Senators who will address the rally in Washington DC this coming Wednesday to demand full repeal of Obamacare, lower taxes and for the Senate confirmation of Judge Neil Gorsuch for the U.S. Supreme Court, said this week that the Obamacare repeal bill proposed by House Leadership goes “a step in the wrong direction” and made clear he is holding out for a full repeal of the hallmark of the Obama Presidency instead.  The DC rally is being organized by FreedomWorks and Tea Party Patriots with the endorsement of Americans for the Trump Agenda, co-sponsor of the Freedom Leadership Conference the following day (register for the Thursday conference HERE, only $5 at the door).

Conservatives note that President Trump has said the House proposal is part of the process of negotiation and discussion of how the repeal and replacement of Obamacare that he is fully committed to should take place, and is therefore not a “take it or leave it” proposition, on the eve of the Washington DC rally and the following day’s Freedom Leadership Conference in Chantilly, Virginia to focus attention on the source of funding of leftwing attacks on the Trump Administration and conservatives.

This Freedom Leadership Conference is the third in a series of 9 for 2017, and is co-sponsored on Thursday, March 16 by Capital Research Center, Americans for the Trump Agenda and United States Intelligence Council, each of which will provide a speaker to detail the source of funding for the leftwing rallies, protests and violence which has grabbed headlines across America and dominated “mainstream” media reporting from the inaugural of President Trump in January through this past week’s “A Day without Women” protest march.

Congressman Jordan and other members of the House Freedom Caucus have made clear that they do not support what they call “Obamacare Light” as proposed by their House Leadership.

Fox TV Anchor Shepard Smith’s continued and one-sided, “not fair and balanced” disparagement of conservatives continued this past week when he again trashed the most principled members of the U.S. House GOP by calling them “the ultra conservative Freedom Caucus.”  He has never been known in his entire career to call any leftwing group, even the ones doing acts of violence, “ultra liberal” or “ultra leftwing.”  Angry conservatives can write comments@foxnews.com, or send a letter to Fox News, 1211 Avenue of the Americas, New York, NY 10036, or call (212) 301-3000 to file your protest and demand that the trashing of the Freedom Caucus by Shephard Smith should stop or better yet that Shepard Smith should be fired.  Unlike Sean Hannity of Fox or Rachell “madcow” Maddow of MSNBC, Shepard Smith styles himself a journalist and a news reporter, not a commentator, which makes his continued sniping at conservatives unfair and unbalanced.

In light of these continued attacks on conservatives, conservatives from now on should refer to him as the “so-called Fair and Balanced Fox TV host Shephard Smith.”

Senator Lee this past week said of the House proposal announced this week, “This is not the Obamacare repeal bill we’ve been waiting for. It is a missed opportunity and a step in the wrong direction.”

Senator Lee’s statement continued, “We promised the American people we would drain the swamp and end business as usual in Washington. This bill does not do that. We don’t know how many people would use this new tax credit, we don’t know how much it will cost, and we don’t know if this bill will make health care more affordable for Americans.”

“This is exactly the type of back-room dealing and rushed process that we criticized Democrats for and it is not what we promised the American people.”

“Let’s fulfill our Obamacare repeal promise immediately and then take our time and do reform right. Let’s pass the 2015 repeal bill that Republicans in both houses of Congress voted for and sent to the White House just 15 months ago. Once Obamacare has been properly sent to the dustbin of history then we can begin a deliberative, open, and honest process to reform our nation’s health care system.”

The President of FreedomWorks, Adam Brandon, together with other conservatives, met with President Donald Trump and Vice  President Mike Pence this week to discuss “repeal and replace” strategy.  Said Brandon, “there are aspectcs of the bill we like, such as the expansion of health savings accounts and repeal of most of Obamacare’s taxes.

The FreedomWorks president echoed the concern of many conservatives by saying of his White House meeting with the President, “We shared our concerns with the bill, including the refundable tax credit, continued enrollment under Medicaid expansion, the likelihood of a ‘doc fix’ scenario of Medicaid expansion as it winds down in 2020, the continuous coverage language, and remaining regulations in the bill.”

“The concerns that have been raised by Sen. Paul, Sen. Lee, and members of the House Freedom Caucus are real,” said FreedomWorks President Brandon, “and we believe that we can negotiate on these provisions, address them in a substantive way, and get to ‘yes’ on this bill and throw ObamaCare into the dustbin of history. “This is the beginning of the process to repeal and replace ObamaCare and move to competitive free-market, patient-centered health care.”

Other conservatives who were at the White House meeting with President Trump also voiced their opposition to what they are calling “RyanCare.”  These groups include Club for Growth and one of the two organizers of the DC rally this Wednesday, FreedomWorks.  Breitbart News has labeled the proposal “Speaker Ryan’s ObamaCare 2.0.”

The President of the other DC rally organizer this Wednesday, Jenny Beth Martin of Tea Party Patriots, told The Hill, “We have heard from thousands of our supporters who are upset about Paul Ryan’s bill. They want full repeal.”

The Hill credited President “Trump with being open to helping them improve the bill and negotiate better terms.” Referring to the White House meeting between President Trump and the conservatives, many of whom will be at the Wednesday rally in Washington DC and  the following Day (Thursday) at the Freedom Leadership Conference in Chantilly, Virginia.

There is a bus paid for by Freedom Works for those in northern Virginia who would like to avoid the traffic and parking in DC which will leave at 10:30 AM for the DC rally with Senators Lee, Cruz and Paul and Congressman Jordan, click HERE to reserve your seat (registration required, limited seating, no charge).

The Freedom Leadership Conference this Thursday is the third of this 18th year of the conference, with many major conservative cause organizations and publications having taken a turn as co-sponsors.  All three of the March conference co-sponsors are past co-sponsors.

Please see past articles on this subject (scroll down) which detail the speakers and agenda for this Thursday conference.  The past seven consecutive conferences during 2016 and 2017 have been at full capacity.