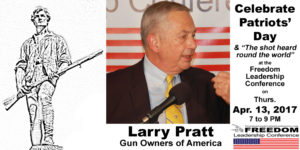 Chances are if you ask 10 Virginians about Patriots’ Day they will think you mean the movie, not the holiday officially celebrated only in Maine and Massachusetts, the April anniversary of the battles of Concord and Lexington which was the start of the American War of Independence.

Leading our celebration in Virginia of Patriots’ Day next Thursday is Larry Pratt, the Executive Director Emeritus of Gun Owners of America and nationally known spokesman for gun rights.  Larry is also a “coalition conservative” who knows that the British march

that caused Paul Revere’s ride to alert the Minuteman to form up to “fire the shot heard round the world” wasn’t about gun control versus firearms freedom.  It’s all about freedom.  That is what Patriots’ Day is.

Patriots’ Day is especially relevant this year because we have a President that conservatives have helped elect to roll back government encroachment on our freedoms from eight years of Barack Obama.

The early bird discount pricing for dinner tickets (5:30 PM with doors open 5 PM) has been extended by one day, and expires at 11 PM tonight, Thursday, April 16.  The waiting list for the regular conference tickets (at 7 PM with doors open 6:30 PM) also will expire tonight at 11 PM.  Those on the waiting list get first choice when (if) regular seating is available.  The first priority is for those purchasing dinner tickets.

Starting on Friday, April 7, the regular dinner tickets for $35 and the conference seating for only $5 will be available until seating is full.  Out of the last eight conferences there was a full-room capacity all eight times with a standing room only for the Governor Forum conference. 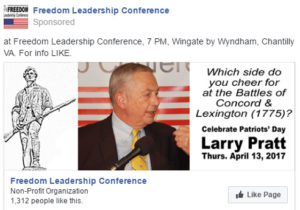 Ad which began running in Facebook yesterday. Unless we receive more funding it will stop after this weekend.

Advertising on Facebook began with “booster” ads to increase the circulation of our regular news posts plus an “outreach” ad shown here, which began yesterday.  We have reached 2,738 northern Virginia conservatives in 25 zip codes closest to the conference who showed an interest in one of 14 “interests” (ie. Such as National Rifle Association, Gun Owners of America, Conservative Political Action Conference, Trump, Cruz, Carson, etc.).  If you are able to donate to help us reach more people during the next week to invite them to join us next Thursday night to celebrate Patriots’ Day go HERE.

Larry’s message next week will especially focus on what we conservatives need to be doing in order to reverse the damage done to our Bill of Rights under eight years of President Obama.  The fact that Donald Trump became President doesn’t mean we’ve won.  The battle is still going on.

“The U.S. is still signed on to the UN’s ‘Arms Trade Treaty.’  We still don’t have nationwide concealed carry reciprocity.  And Obama’s anti-gun Executive Orders are still in force.”

So on the one hand yes we want to celebrate Patriots’ Day next Thursday, the battles of Concord and Lexington this month back in 1775.

On the other hand we still need to heed the warning of United States Senator Steve Daines and long ago the warning of Paul Revere, who rode to alert the Minuteman who “fired the shot heard round the world.”

We need to make a stand with President Trump, we need to keep the heat on Congress to act to restore our lost freedoms.

As the sponsor of the Freedom Leadership Conference next Thursday, Larry Pratt will update you about what his Gun Owners of America has been doing to fight for our freedom.  He will also remind you that freedom is never free, and we need you with us.

Whether you can attend the dinner – which helps us pay the conference bills including the advertising we are doing – or the conference only – or can donate to help – or can do some or all of these – please let us hear back from you right away.  As always we can use help from several volunteers who can come early (4 PM) to help with conference setup.

For a “conference only” reservation you can also send your name and zip code to RSVP@FreedomLeadershipConference.org.

If you are the leader of a conservative cause organization and wish to know more about sponsoring a future conference see the Sponsor letter on the right side of this website or go HERE.

If you are a supporter of a conservative cause organization which has not yet sponsored a conference, why not write and ask them to do so – refer to the sponsor letter on page 1 of this website (again: right side).

If we don’t roll back the advances of Barack Obama, “it’ll be like Obama, not Trump, is the acting President,” says Senator Daines.

Join us in celebrating Patriots’ Day with Larry Pratt and Gun Owners of America next Thursday night, April 13.