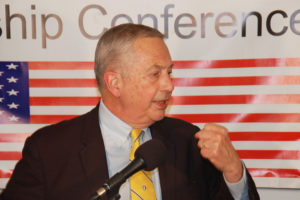 Larry Pratt returns to the Freedom Leadership Conference on Thursday, April 13 to celebrate Patriots’ Day. Pratt is the Executive Director of Gun Owners of America, a repeat conference sponsor.

Larry Pratt Once again to be Keynote Speaker at Freedom Leadership Conference, at Chantilly Wingate by Wyndham Hotel on April 13, 2017

Join us in a celebration of Patriots Day on April 13, 2017 at the Freedom Leadership Conference, sponsored by Gun Owners of America and featuring an evening with Larry Pratt, their Executive Director Emeritus, on Thursday, April 13 at the Wingate by Wyndham Hotel in Chantilly, Virginia, conference at 7 PM, dinner at 5:30 PM, advance registration required, ultra-early bird pricing expires tomorrow night (Friday 3/31), for those ready to celebrate Patriots’ Day who reside in Virginia or within drive distance HERE.

The logo of Gun Owners of America makes a perfect fit for the Patriots’ Day Celebration on April 13 at Freedom Leadership Conference.

Patriots’ Day, celebrated the third Monday in April each year, commemorates the battles of Lexington and Concord in 1775, the start of the American War for Independence, with the “shot heard round the world.

Paul Revere’s famous “midnight ride” was made famous (with some artistic license) by the poet Henry Wadsworth Longfellow.

When you hear liberals whine about Donald Trump and they use the word “resist” remember they know nothing.  “Resistance” to tyranny started with the

British attempt to seize American weapons and munitions and arrest those speaking out for freedom, including Samuel Adams and John Hancock.

Paul Revere, one of the heroes of the American Revolution, rode to warn the Minute Men and help them prepare for “the shot heard round the world.”

Today Larry Pratt is in so many ways, a modern day Paul Revere with his many years of work to warn Americans about the destruction of the rights earned for us starting on Patriots Day of 1775.

It is time to stop with “resist” and move forward with advancing to restore our rights under President Trump.

We hope you will join us to learn more on April 13 at this Conference and if possible come early to have dinner with Larry Pratt & our Conference Leadership.

While Larry is a fierce partisan for gun owners, he is also a longstanding “coalition conservative” who speaks on a wide variety of issues of concern to conservatives, which also makes him a very popular and in demand speaker from coast to coast.

Larry will speak informally during an earlier dinner for conference attendees, whose dinner donation also includes an amount to help pay for the venue and other conference expenses and enables us to subsidize the lower priced “conference only” admission.  His keynote remarks will be during the 7 to 9 PM conference (doors open 6:30 PM), which is nearly free with a token admission required at the door and advance registration required.

Conference tickets will be limited to a “waiting list” to allow dinner attendees first choice for seating and will be allocated in the order of the date requested.  If there are available seats remaining on Friday, April 7, those on the waiting list for the much lower priced conference (only) seats will be given the opportunity to purchase their ($5) tickets to the extent of seats remaining.

Dinner Attendees who can serve on the Host Committee, will have preferred seating at both the dinner and the conference (with their $100 donation) and enable us to advertise the conference to a wider audience with Facebook promotions.