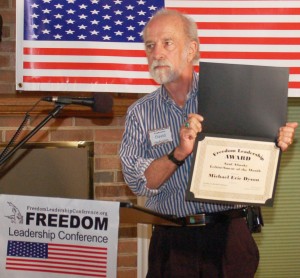 David Denholm displays the Certificate that he will mail to Michael Eric Dyson of MSNBC TV as the July “Saul Alinsky Smear Conservatives” award winner at the Freedom Leadership Conference. The next Conference and a new “winner” will be announced on August 21 in Northern Virginia.

Michael Eric Dyson of MSNBC TV was announced as the winner of the “Saul Alinsky Smear Conservatives” Award at the Freedom Leadership Conference on July 17, 2013 (see video HERE).  Dyson recently called Supreme Court Justice Clarence Thomas, a favorite of many conservatives, a “Symbolic Jew who sides with Hitler” to “commit Genocide.”

The leftwing Michael Eric Dyson criticized Supreme Court Justice Thomas after he voted with the majority of the U.S. Supreme Court voted recently to overturn part of a law that put state and local governments which had some 50 years ago a record of discrimination, under the supervisory control of the federal government regarding their election laws.

Justice Thomas, being a respected black conservative admired by black and white Americans alike, typically enrages hard core leftists more than any other Supreme Court Justice.  Thomas voted with the majority on the vote that sent Dyson “over the top” with his vitriolic attack, including Chief Justice John Roberts, and Justices Antonin Scalia, Anthony Kennedy and Samuel Alito.

The Voting Rights Act of 1965 was enacted to put those jurisdictions – states and local governments – which had been shown to discriminate against blacks – under the supervisory control of the federal government.  In the nearly 50 years since the law was enacted, many of the jurisdictions have elected black legislators, mayors, congressmen, and even a U.S. Senator in South Carolina.

Leftists freely admit they single out Justice Clarence Thomas because he is black, conservative and so highly respected.

His appearance on Wed., June 24 on the MSNBC TV Martin Bashir show gave commentator Michael Eric Dyson the chance to launch his smear of Thomas, prefaced with this frank admission, rather incoherent but clear that Thomas’ being black, conservative and consistent, are the reasons for his smear:

“Clarence Thomas’ actions here today – though consistent, though tragic to me – are even more so in light of the bulk of decisions he’s rendered in the name of a judicial vote on the Supreme Court,” said the leftwing Dyson.

Leaders of the Freedom Leadership Conference approved the nomination of Dyson for this “award” by David Denholm, President of Public Service Research Foundation, which was announced by Denholm at the July conference.  They explained that Dyson’s hateful and despicable language criticizing Supreme Court Justice Thomas really does personify the goal of radical leftist teacher Saul Alinsky, whose goal was to demonize his targets on the right.

David Denholm explained the Alinsky strategy is to “demonize and pulverize” their opponents rather than actually discuss issues and their public policy proposals.

Dyson’s “punch line” against Thomas that makes him a top contender for the “Smear” award is, ““A symbolic Jew has invited a metaphoric Hitler to commit holocaust and genocide upon his own people.”

Alinsky did not invent the “rules for radicals” his book is named after but he did codify them and make them more teachable for the radical left, said Denholm at the July conference.  “Alinsky taught that it was political idiocy if you ever admitted that your target was anything less than 100% devil,”  Denholm said in his remarks.

The Dyson attack on Justice Thomas came during Dyson’s appearance on the Martin Bashir MSNBC-TV Show.  Bashir himself has “won” his own “Alinsky Smear Conservative Award” at the June 12 Freedom Leadership Conference.

Nominations for future awards may be made (with or without documentation, such as an article you can provide the link to) to LeftSmear@FreedomLeadershipConference.org.  The final decision will be made by the Leadership Council of the Conference during the dinner with their monthly keynote speaker, which is next scheduled for August 21, 2013 in Northern Virginia.

David Denholm has spoken at most of the monthly Freedom Leadership Conferences since the conference changed to a monthly in late 2012, on the subject of Saul Alinsky’s despicable tactics.  He announces the award after the dinner when the conference begins at 7 PM with a coffee, tea and dessert social and the program starts at 7:30 PM.

The Freedom Leadership Conference started 14 years ago as an annual event in southern California as the Western Conservative Conference, which ran over a three day weekend.  To become a member and be invited to the monthly conference, you may make application for Provisional (temporary or candidate) Membership HERE.

For more information about the conference this Wednesday (PDF of a flyer), HERE.

Once you have submitted your application for Provisional Membership you may reserve your place at the conference starting at 7 PM (suggested donation of $5 at the door) HERE.

The dinner that precedes the conference begins at 5 PM, for members (not new, Provisional Members) only, HERE.

To read the story about the Conference on August 21, see: A Conference for People of Faith set for August 21; Birthmother Ministries to Sponsor Author & Representative Stephen Bloom