How to fight back in the War on Christians 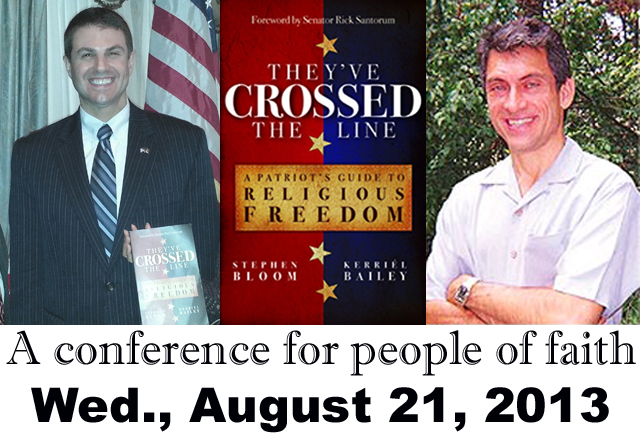 The two principal speakers at the Freedom Leadership Conference in Northern Virginia this Wednesday will call on people of faith to take action to demonstrate their faith.  State Representative Stephen Bloom of Pennsylvania and Birthmother Ministries President Jim Wright will deliver keynote remarks at the conference originally founded 14 years ago as an annual function and now meeting monthly for members only in Northern Virginia.

Rep. Bloom brings with him a practical “how to” guide for Christians who are concerned about the war on Christians and what they can do about it his book, They’ve Crossed the Line: a Patriot’s Guide to Religious Liberty.”

Jim Wright will bring with him the example of those who make use of his Birthmother Ministries, the conference sponsor for August, to put action behind their faith.

The Wednesday function is billed as “A Conference for People of Faith” with the strong reminder, “faith without works is dead.”

And we here announce a new conference sponsor for August, Americans for Christian Traditions in our Nation (ACTION OF PA), with one of their Board members also speaking at the conference – Pastor Ken Gibson.

It is still possible to reserve a seat at the free conference for this Wednesday at 7 PM, HERE.

A special letter of Rep. Bloom and flyer that provides more details about the Conference (3 page letter and 8 ½ by 11 flyer, PDF) is HERE.

The Obama Administration’s efforts to regulate and control many of the activities of people of faith and their churches – such as the Obamacare requirement that what they call “women’s services” must be provided despite the religious teaching of  church, have resulted in severe protests and lawsuits.

The movie For Greater Glory staring Andy Garcia (2012) showed the true story of Christians persecuted for any attempt to display or practice their religion outside the walls of their church in Mexico and the war that followed in 1926.

The same suppression of Christians in Mexico – who called themselves “Cristeros” (followers of Jesus Christ) is in fact happening in America, and the book by Wednesday’s keynote speaker, Pennsylvania State Representative Stephen Bloom (co-authored with Kerriel Bailey) documents specific persecutions of people of faith, and what can be done, case by case.

The important point that Rep. Bloom makes is that this suppression and persecution of people of faith is happening and we can do something about it.  We don’t need to simply allow this suppression.  We have alternatives.

The remarks of Rep. Bloom this Wednesday will be supplemented by a second principal speaker, the President of Birthmother Ministries, Jim Wright, who will speak of the sad plight of so many women who accept an abortion as what they think is the only solution to a surprise (to them) pregnancy – when his organization offers loving help, support and counsel for them as a much better alternative.

Bloom’s book is a “take-away” that gives specifics that may be shocking to a lot of people for two different reasons.  One, a lot of people will be shocked to hear that this is actually happening in America to people of faith.  And second, for the smaller number of Americans who are exceptionally well read and well informed and already know some of these stories of suppression of Christians, there are actually legal remedies and actions that can be taken without having to simply submit.

In Rep. Bloom’s opening chapter for example, we meet a young lady named Kamerin, who wears a tee shirt to her school that gets her in trouble.  Not because it has bad language or an image of a mass murderer (like Che Gueverra, for example) but because it is a tee shirt from her Christian summer camp that has a cross on the front (the logo of the camp) and on the back, “Now faith is being sure of what we hope for and certain of what we do not see.”

The young student Karerin, in this “case study” (fictional account representing real situations), is summoned to the principal’s office where she is confronted by the school principal, the school nurse, and a security guard, and then told she must remove the tee shirt immediately because:

“You’re in violation of the student dress code, young lady.  The proselytizing message on your shirt is disruptive to the classroom environment, and its blatant religious symbolism is offensive to our academic community’s values.  We have zero tolerance for this type of intentional disrespect for the rights of other students.”

Each chapter in Rep. Bloom’s book begins with a similar story based upon real situations where people of faith have been suppressed when they step out into “the public square” and make any attempt to express their faith.

Just like in the For Greater Glory movie with Andy Garcia, we see in Bloom’s stories, how Christians are being told in America today that they must be silent about their faith except when they are in a Church on Sunday.

The good news is that we don’t have to see if this suppression will reach the stage it did in Mexico in 1926, which resulted in the war by Christians to defend their faith.  Rep. Bloom will speak about this and his book details the many legal alternatives we have when faced with any such suppression of our beliefs.

Regardless of whether you have ever personally been in such a situation – the Bloom book has 15 such stories in 15 chapters with advice on how to defend your faith – the fact is that more people ought to realize that we DO have alternatives and we CAN fight back.

In addition to Rep. Bloom as one of the two principal speakers there will also be a small contingent of his friends from Pennsylvania coming to speak and support him at this conference.

Another Pennsylvanian who will address the conference –is Pastor Ken Gibson, who is a state leader and board member of “Americans for Christian Traditions in our Nation of PA (ACTION of PA).  Gibson, has also earned national attention with his efforts to organize Christian pastors to defend their faith in the public square, see Christian Pastors in York, PA pledge to turn out the vote to defend religious liberty.

The “Saul Alinsky Smear Conservatives” award will be announced at the Conference.  Nominations and suggestions may be made to LeftSmear@FreedomLeadershipConference.org.

We hope to see you on Wednesday at 7 PM at the Freedom Leadership Conference, this month sponsored by Birthmother Ministries.  Copies of the Bloom book can be purchased for the discounted price of only $10 (nearly $4 off the Amazon price with shipping) and of course Rep. Bloom will be happy to autograph copies of the book.  The book will be available “first come first served” with those who attend the dinner having first call on the limited supply that Representative Bloom will bring with him from Pennsylvania.

To reserve your place at the conference go HERE and if you are not already a conference member don’t forget to sign up as a PROVISIONAL MEMBER so that your registration will be approved.  Provisional Members receive a complementary subscription to the Freedom Digest email newsletter and have the option to attend one conference before deciding whether they wish to be considered for full membership (which is also complementary).  In addition, for those who simply wish to continue their Freedom Digest email newsletter they may choose to SUBSCRIBE only.

The conference location is only provided to those who are approved members of the Freedom Leadership Conference and always begins at 7 PM with a coffee/tea and dessert reception.  Those who are members are also invited to a small dinner with the keynote speaker each month at 5 PM.

The 2013 Conference Agenda after August includes: