Free China: The Courage to Believe movie documenting Red China persecution of people of faith to be shown (no admission charge) at 8:15 PM in Springfield, VA

President Barack Obama’s speech to the nation tonight (Tuesday) to call for Congress to authorize his wish to bomb Syria will be the “defining moment for the remainder of his term” as the Freedom Leadership Conference convenes the very next night in northern Virginia and brand new “Nobomba” bumper stickers will be given free to each conference delegate (to attend click HERE).

Conference leaders pointed to China as a more suitable target for Presidential ire, whose government has killed and tortured many more millions of their own citizens than has the government of Syria in recent weeks.  The Conference will adjourn early so that they can have an open “movie night” (anyone may attend) to see the new “Free China: The Courage to Believe” movie at the West Springfield government center.  Free advance registration to watch the movie may be secured HERE. 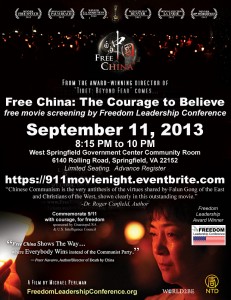 Movie Flyer/Poster (8 1/2 by 11 PDF) for Free China: The Courage to Believe, showing on 9/11/13 under the auspices of Freedom Leadership Conference.

“President Obama’s speech to the nation Tuesday night has turned into a defining moment for the remainder of his term” said the Boston Globe, echoing what many across America believe. “The outcome of his call for Congress to authorize military strikes against Syria could determine both his credibility on domestic issues and his power on the international stage.”

The new “Nobomba” sticker that will be given to attendees of the Freedom Leadership Conference at its regular monthly meeting of Wednesday, November 11, will also be part of a candlelight vigil and remembrance.  “Rather than curse the darkness we wish to challenge it with light” said conference organizers.

This month’s “mini-conference” will adjourn at 8 PM with the lighting of candles (which will be provided) with the first to be lite by Dr. Larry Liu, of the Falon Gong, who will also introduce the movie at the 8:15 PM “movie night” at the West Springfield Government Center Community Room, 6140 Rolling Road, Springfield, VA 22152.

The followers of this spiritual discipline have been called “fellow people of faith” by the Freedom Leadership Conference.  The movie documenting their persecution at the hands of Communist China, “Free China: the Courage to Believe” will be awarded a “Freedom Leadership Award” at the Conference, which will be accepted by Dr. Larry Liu.

“Lighting candles is in remembrance of the victims of darkness in this world, from September 11, 2001, through the years of war against terrorism, to last year on September 11 in Benghazi and for people persecuted for their faith in Communist China,” said conference organizers.

Dr. David Tian will speak on the challenges for people behind the Bamboo Curtain to use the internet for basic information, and the “great Chinese firewall” that blocks such information.  He will contend that free access to information and the ability to express your own views and faith without interference by government – which Americans call a First Amendment Right, is a prerequisite for freedom.  And, free access to the internet without government interference, is the most important component of such freedom.

Dr. Roger Canfield of Sacramento, California, will address the conference via internet (video & audio).  Canfield, Vice President of this month’s conference co-sponsor US Intelligence Council, is also the author of several books published by the Council will reached 1 million Americans and more recently the book that documents how some American leftists helped the Vietcong Communists win in Vietnam (see HERE).

Christopher Carmouche, President of GrasstopsUSA, will be the wrap up speaker after the movie program, 8:15 (doors open; 8:30 program begins) to 10 PM.

This month’s conference is co-sponsored by United States Intelligence Council and GrasstopsUSA, with a last minute endorsement by Americans Against the Obama Agenda (aka: NObamaUSA), which is providing the free “NObomba” bumper stickers to conference attendees.

NObamaUSA is setting up a website to make available the new NObomba stickers along with their regular “Nobama” stickers, at NObamaUSA.org (not yet setup at press time).  They also have a “NOboma” sticker available.  A direct link for immediate purchase of the stickers is here (they will correct the “nobama” mispelling that their programmer put in there shortly so hold your emails!):

The “Nobomba” sticker idea was proposed by a member of YAF ARCHIVE, the informal Young Americans for Freedom alumni group at Google Groups, who reacted to the earlier article in this space inquiring as to the views of YAF alumni on the issue of whether the President should be authorized by Congress to bomb Syria or not.

One alumni weighed in with a one word answer to the query of Freedom Leadership Conference: NObomba.  Another YAF alumni immediately jumped into the discussion, suggesting that one word should be made into a bumper sticker.

Recklessly ignoring charges that we might be accused of being part of the “vast rightwing conspiracy” (how long ago did Hillary say that?), conference organizers accepted the offer of another of the YAF alumni who had already organized an “Americans Against the Obama Agenda” and already had on order a “NObama” bumper sticker, and were working on their “NObama” website.  They turned around the art on the new NObama sticker on the same day they saw the idea at from the YAF alumni group.  For evidence that YAF was the origin point of that “vast rightwing conspiracy” liberals may rely upon the book by Dr. Wayne Thorburn, A Generation Awakes: Young Americans for Freedom and the Creation of the Conservative Movement.

The 9/11 Conference is being ended early to make time to watch the movie, 8:15 to 10 PM.  The conference itself will run from 7 to 8 PM at the nearby  Milano’s Family Restaurant, 6230-G Rolling Rd., Springfield, VA 22152.  Those who are already Conference Members may participate in the dinner honoring the conference speakers, from 5 PM (dinner served at 5:30 PM) to 7 PM.  Coffee and tea will be served 7 to 7:15 PM with a short conference program, to be ended with the candlelight memorial.

Next Month’s Freedom Leadership Conference will be hosted by the Thomas Jefferson Institute for Public Policy, whose President, Mike Thompson, will deliver keynote remarks on how to create a better tax system for Virginians which will not punish business for success.

Thompson, a longstanding conservative and Republican Party leader, will also serve as “Master of Ceremonies” at the Wednesday, November 11 “movie night” segment of the Freedom Leadership Conference and will join in discussion with the two speakers representing the Falun Gong at the conference Leadership dinner at 5 PM on 9/11.

The movie night segment, unlike the regular monthly conference, does NOT require advance conference membership.  To become either a subscriber to the complementary Freedom Digest email newsletter or a Conference Provisional Member (which includes the newsletter & allows for admission to one of the monthly conferences) click HERE or see the upper right hand corner of this website.

The Freedom Leadership Conference was founded 14 years ago in southern California as the “Western Conservative Conference” with Honorary Chairman, now U.S. Congressman Tom McClintock and 35 conservative cause organization sponsors and 30 state legislators as Honorary Co-Chairmen.  It switched to a monthly conference late 2012 and now has had over 60 sponsor organizations.