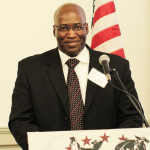 Dr. Johnnie L. Simpson, DBA/BI, paralyzed during his service in the U.S. Army during the Iraq War and fighting the Veterans Administration ever since for the medical care promised to him and other American servicemen, will be the featured speaker at the Freedom Leadership Conference on Wednesday, May 20 at the Hilton Garden Inn Hotel in Fairfax, Virginia.

The May 20 Conference resumes the monthly series of what began as an annual conference 16 years ago and which has been sponsored by some of the leading conservative cause organizations and publications including the Washington Times National Weekly Edition, Human Events, Gun Owners of America, American Border Control, Accuracy in Media, Citizens Committee for the Right to Keep and Bear Arms, Judicial Watch, Leadership Institute, Traditional Values Coalition, U.S. Justice Foundation, Conservative Caucus, Grasstops USA, Secure America Alliance, Thomas Jefferson Institute, Young Americans for Freedom, U.S. Intelligence Council, and many more.

The May 20 conference will be sponsored by a past conference sponsor, Uniformed Services League as the conference resumes in 2015 the monthly format it tried out in 2013-2014.  The Conference flyer (8 1/2 by 11 PDF) can be downloaded and printed out HERE.

Uniformed Services League also presented Dr. Johnnie L. Simpson, Jr. at the recent Northern Virginia Regional Tea Party Conference in Northern Virginia, where he briefly addressed the conference about his plans to speak at this May 20 Rally and Conference. His remarks were actually sponsored thanks to the sponsorship of that conference, by the Freedom Leadership Conference.

Dr. Simpson gave the Tea Party conference a small sampling of what he has in store for those who attend the May 20 conference in Fairfax, Virginia.

“In the name of the United States and you as a citizen,” he told the Tea Party, “promises were made to those who wore the uniform of our country. It is a simple deal.”

“In return for service in the Army, Navy, Air Force, Marines or National Guard, and in return for being willing to put life and limb at risk for our country, you the American people through your government and through the Veterans Administration – the VA – promised to provide whatever medical care was needed to take care of us,” said Dr. Simpson.

He went on to bluntly advise, “these promises are not being kept,” explaining “Veterans with severe and even life threatening medical problems have been given the run around. Many have died waiting for the promised medical services. Others who hang on to life, have suffered from their illness with insufficient or even no medical care.”

Dr. Simpson gained his expertise in this field the hard way – he is paralyzed from the waist down from his service in the Army and has fought the Veterans Administration to keep its promises to him.  He has then shared his growing expertise with more and more embattled veterans who are also fighting for life and health during the administration of President Barack Obama.

“I was asked to keynote this conference and spearhead a new effort to secure the promises of help for those who served America in uniform because of my work helping veterans fight for their rights against the Obama Veterans Administration and the government” said Dr. Simpson about the new project of Uniformed Services League.

Dr. Simpson told the Tea Party gathering of the surprise that many veterans get when they learn that if medical help is not requested within two years of the end of their military service, “then VA will simply reject your claim and turn their back on you, despite your military service to America.”

The number of affected veterans awaiting a disability determination and affected by the stalling of the VA is over 600,000, according to Dr. Simpson.

In his remarks he gave a brief outline of three of the cases he will speak about in more detail on May 20.

Rick Thomas Tuff has been given the runaround by the Obama VA after his U.S. Army service.

Andrea served in the U.S. Army and despite having already been hospitalized and diagnosed with Post Traumatic Stress Disorder (PTSD) continues to wait for medical care.

And “Donjuan Williams was rejected so fast that you really cannot say he was even seriously considered after his honorable military service.”

Uniformed Services League has appointed Dr. Johnnie L. Simpson Jr., to be its principal spokesman for this new “Emergency Save our Servicemembers” project – and asks readers to lend help and support by spreading the word about his May 20 appearance at the USL sponsored Freedom Leadership Conference at the Hilton Gardens Inn on Route 50 near Route 66 in Fairfax, Virginia.

Dr. Simpson concluded his remarks at the Northern Virginia Regional Tea Party function of Saturday, April 18 by asking “if you won’t help us, then who will? If not now, when?”

The May 20 conference is open to the public with a requirement for an advance RSVP on the conference eventbrite page, or by email to EventCoordinator@FreedomLeadershipConference.org, and a suggested $4 donation at the door to defray room rental expense.  The free event begins at 7:30 PM (doors open 7 PM) and will adjourn at 9 PM ($5 suggested donation at the door, and an advance RSVP is strictly required for admission to the event).

There is a dinner honoring Dr. Simpson and to support veterans at the hotel which begins at 6 PM promptly (doors open 5:30 PM) for conference members and candidate-members, for the early bird rate of $52 per ticket and $99 for couple (ie. husband & wife), with dinner sponsorship for $100 and Benefactor $250. Donations above the cost of the dinner will be used to pay for our guest’s dinners and for advertising this event.  Note the “early bird” discount expires on Monday, 5/11 go to the order page promptly if saving money is important to you (it is also important to us since we have to pay the hotel most of the money they require, FAR in advance of the actual dinner date – in fact it is CRITICAL to us).

To make a reservation to attend the conference (including the dinner if you care to come earlier) HERE. To be added to the free e-newsletter HERE to learn details about this and future conferences.

While Uniformed Services League is the Primary Sponsor for the May 20 Freedom Leadership Conference they would be delighted to have additional conference primary sponsors ($1000), or sponsors ($500) or co-sponsors to help present this issue and to help provide funding for additional advertising of this event and to invite additional guests – veterans with medical disabilities who Dr. Johnnie L. Simpson, Jr. is directly working with to appeal for their medical benefits to the VA.  For sponsorship details for your organization – for this or for your own “headline” conference event in the future you may write to EventCoordinator@FreedomLeadershipConference.org.

To attend the Freedom Leadership Conference on May 20 at the Hilton Garden Inn Hotel in Fairfax, follow the link. This article has been provided by Uniformed Services League and is cross posted at the USL website.  We strongly urge those who support the efforts of Freedom Leadership Conference to build the coalition of conservatives to please download and then circulate (by email and by printed copy) the conference flyer HERE.  You can also copy/paste the link for this article and send it via email and via post at your Facebook page, as well as the flyer, https://freedomleadershipconference.org/wp-content/uploads/150520VETSvsVAflyer.pdf.