Roman Buhler of Madison Coalition to speak on “Liberty Amendments” this Wed. 11/13 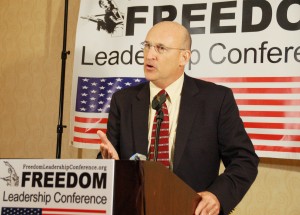 Lt. Colonel Tim Hanigan, USMC (Ret.) gives a preview at our last Freedom Leadership Conference about what is planned for the Conference this Wednesday evening with its “Salute to our Servicemembers” theme and keynote remarks by the top conservative U.S. Congressman from Pennyslvania, Scott Perry (also an active duty Colonel).  Lt. Colonel Hannigan’s brief remarks last month touch on the importance of the “core values” that are instilled in military leaders, which are so often very much at odds with the absence of such core leadership values in so many of today’s political and even some of the newer military leaders.
Lt. Colonel Hannigan will speak and will introduce another military veteran at this Wednesday evening, 7 PM conference– active duty in fact – at this Conference, Colonel Scott Perry, who happens to also be the top rated conservative Congressman from Pennsylvania according to Heritage Action.  The Conference will be meeting for the 2nd consecutive month at the Fairfax Marriott at Fair Oaks Mall and welcomes new attendees.

Register to attend (free with $5 suggested donation at the door) HERE.

(Conference members and new Provisional Members may attend the dinner, 5 to 7 PM, register above)

Lt. Colonel Hanigan and Congressman Perry will be part of a very crowded agenda at this final conference of the monthly series in Northern Virginia started in later 2012 after 14 years as an annual event.

Another speaker announced today is Roger Aronoff of Accuracy in Media, which is one of the original conference sponsors from over a dozen years ago when it was still called Western Conservative Conference in southern California.  He will speak on “Benghazi: A Phony Scandal?”

As announced yesterday, Roman Buhler of the Madison Coalition will speak on part 2 of the series, The Liberty Amendments Proposal of Mark Levin.

We will have someone who was on the scene to further report on the incident we have already reported to you that took place during the hearings to determine which Provisional Ballots to approve and which to reject, “”Democrat Vote-Count Intimidation in Virginia?”.  There will be the Saul Alinsky Award announcement, a review of the best part of “The Thurmont Statement of Conservative Principles” (according to the speaker), and the popular “Volunteer Conservatives Lightning Round (where up to 6 speakers will explain how they have volunteered their time or funds for the conservative cause).