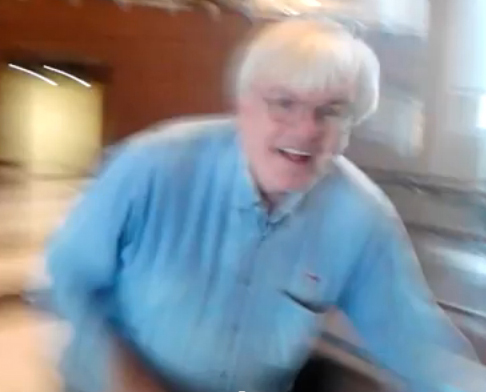 A new topic has been added to the agenda of the Freedom Leadership Conference this Wednesday (register HERE): “Democrat Vote-Count Intimidation in Virginia?”  The Democrats’ propensity for cheating in elections is a growing concern.  The photo above shows Fairfax County Democrat Party General Counsel John Farrell as he prepares to lunge forward with his right hand to strike at a Republican volunteer.

The photo is taken from the videotape of him yelling at a Republican Party member.  Farrell appears to either strike him or threaten to strike him, during the vote audit process leading up to a voter recount.  It seems very clear that the Democratic official would prefer that no Republicans be in the room, nor any signs for Obenshain be in the room (leaving only Democrat signs) while they determine which provisional votes will be counted, and which will be disallowed in the close Virginia election.

We present here the video of the incident for you to judge for yourself, click image below or HERE.

While Freedom Leadership Conference does not advocate for or against candidates for office, with the election over now it is no secret that virtually every conference attendee voted for, donated to, and/or worked for the election of Mark Obenshain to be Attorney General of Virginia, in a race where the outcome is still too close to call.   Additional information about this incident can be found HERE.

(note: attendance is free but advance registration is required, and a voluntary donation of $5 to help pay for conference expenses is requested at the door.  Register for the 7 to 9 PM conference, or if you are a member, for the 5 to 7 PM dinner, HERE)

The attempt to intimidate Republicans and even force them out of the entrance to the room where hearings are being conducted to determine the status of Provisional ballots, may only be an isolated incident.  But our sources – at least one of whom will report on this matter on Wednesday at this Freedom Leadership Conference – fear that it is symptomatic of Democrats’ plan to cheat in order to steal the close and contested Attorney General election in Virginia.

The Freedom Leadership Conference also announces Roman Buhler to speak on the subject of the Mark Levin “Liberty Amendments” – a proposal in his bestselling book – to curb the growth of federal government power at the expense of the states.

This will be part 2 of the series, this month featuring Roman Buhler, speaking for the Madison Coalition, which has fine-tuned the specifics of how this proposal can be implemented, and which has been a longtime advocate of the idea of curbing federal government power to return to the original intent of the founders.

Another speaker will address and add to the topic originally covered in our earlier and widely recirculated report, Top Eleven reasons to ignore liberal whining about GOP loss in Virginia.

Congressman Perry – labeled as the highest rated conservative in the Pennsylvania Congressional delegation by Heritage Action – has requested to be allowed time for “Questions and Answers” at the conference.  There is sure to be at least one question on his vote against the funding of Obamacare and raising the debt ceiling in October, the stand of the majority of House GOP members.

Lt. Colonel Tim Hanigan (USMC, Ret.) will be the “moderator” of a panel of retired military to join Congressman Scott Perry in both thanking those who have served in our military in this post Veterans day “salute” and also focus attention on the expanding threat to Americans servicemembers in the world.

Ralph Hubbard, who did a splendid job explaining the monthly “Saul Alinsky Smear conservatives” award at last month’s conference and announcing the award winner, has been asked to do an encore performance.

Informal discussion will take place during the Conference dinner, including remarks by any of our Conference Dinner Hosts (which are those who make an additional donation to help fund the conference.  The dinner is open to those who are either Conference Members or have been approved as Conference Provisional Members.  The Conference Rules have been altered to allow anyone to attend the actual conference itself, from 7 to 9 PM, provided that they advance register and agree to abide by the conference rules (see elsewhere on this website).

This is the last of the monthly series of Freedom Leadership Conference events, started one year ago after 14 years as an annual event, originally started in southern California as Western Conservative Conference.

Organizations which wish to sponsor one of the 2014 monthly Conference events should write to EventCoordinator@FreedomLeadershipConference.org.  There is no fee or charge for such sponsorship, which allocates 30 minutes for the sponsor, including 14 minutes for the keynote speaker and the other 16 minutes to be used at the discretion of the sponsor (either Q&A, or extension of remarks, or another speaker).  In the event the sponsor organization wishes to sponsor a conference at an upgraded location, such as this month’s Marriott Hotel at Fair Oaks Mall, there is a fee that must be paid directly to the hotel.

The Freedom Leadership Conference Board of Directors will meet just before this month’s conference to begin discussion about whether to continue the series as a monthly in 2014, change to quarterly, or revert back to an annual Conference, as the 15th year begins.