“Saul Alinsky Leftist Smear of the Month Award” to be announced at Feb. 13, 2013 Freedom Leadership Conference in Northern Virginia 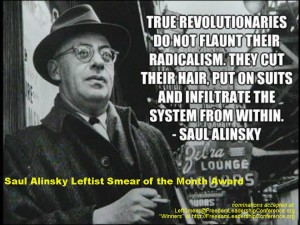 First “Saul Alinsky Smear of the Month” Award to be announced at Wed., 2/13 Freedom Leadership Conference

The tactics of the radical left have always included demonizing and smearing conservatives. Well before Saul Alinsky and his notorious Institute started to codify these methods in a formal teaching curriculum in Chicago and the publication of his “Rules for Radicals”, these tactics have been used as a way to avoid debate with conservatives on the issues by instead smearing and demonizing them rather than speak to their public policy proposals.

Starting at the February 13 Freedom Leadership Conference (see earlier post, Benghazi vs Watergate: What Difference Does it Make?) we will issue the Saul Alinsky Leftist Smear of the Month Award to the leftist organization or individual who we believe most personifies this tactic, which we believe is destructive to freedom even as it has so often been successful in helping the radical left in America accomplish its objectives. We accept nominations and suggestions which may be made by email.

You may also provide quotes and citations – especially links to articles or video which support your nomination – to document why you are making your suggestion. Feel free to write a short essay of 250 words or less which may be used at the Conference for which you will also be given credit (if you wish).

David Denholm, President of Public Service Research Foundation and one of the founding members of the new monthly event in northern Virginia, will announce the Saul Alinsky Leftist Smear of the Month Award at the Feb. 13 conference.

Make your nominations to: LeftSmear@FreedomLeadershipConference.org.