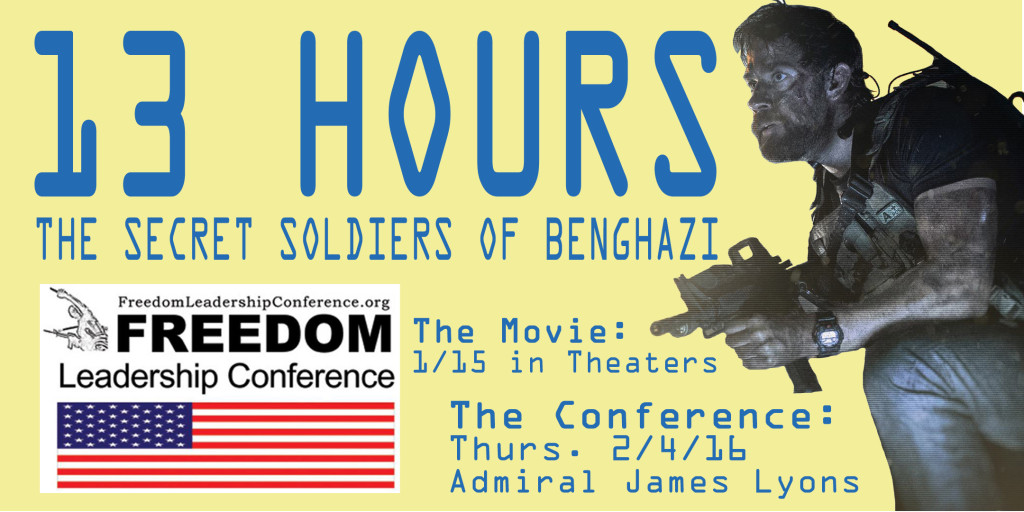 Admiral James Lyons Confirms is the Keynote Speaker to promote movie and the cause, 13 HOURS: The Secret Soldiers of Benghazi

The big blizzard of 2016 has postponed the Freedom Leadership Conference scheduled for tomorrow night (1/27) until the new date of Thursday, February 4 – the entire schedule remains the same as before with Admiral James Lyons as the keynote speaker and the focus on the new movie released this month, 13 HOURS: The Secret Soldier of Benghazi.

Hillary Clinton called the former special operations warriors whose story is told in this movie “liars.”  The CIA gave a medal to the station chief who three times is shown in the movie telling the warriors STAND DOWN.  For ignoring those orders the conduct of the “contractors” hired by the CIA was called “shameful.”

Will you STAND UP for these genuine American heroes, the once-secret heroes of Benghazi?  The 7 to 9 PM Conference is free ($5 suggested donation at the door for room rental), the 5:30 to 6:30 dinner is only $35 (save $5 over the at the door price of $40), and a couples discount is also available, RSVP is required, click HERE or write RSVP@FreedomLeadershipConference.org.

If you haven’t already ordered your seat at the dinner table with Admiral James Lyons you now have several extra days to make your plans or better still to get together several friends or family to come to the dinner and the Conference with a group.

This conference is co-sponsored by GrassTopsUSA which is providing its President as a speaker, and by Uniformed Services League, which is providing as speakers Admiral James Lyons (former Commander in Chief of the Pacific Fleet, and President/CEO of LION Associates LLC, a premier global, consulting firm providing counsel and advice on foreign policy and security affairs, and a regular op-ed columnist) and Michael Pregent, former intelligence advisor to Gen Petraeus, and Director of Veterans Against the Iran Deal.

Scroll down for more details and stay tuned for a new conference flyer for you to use to help promote the conference or click HERE.

We are most interested in finding several individuals who might contribute to help us do more advertising for this conference and movie via Facebook – a conference Host donation is $100 and a conference Host Committee Co-Chairman is $250.  We also also hoping to find at least one more co-sponsor ($250) which also gives the organization a 10 minute speaker slot at the conference.

Incredibly, we heard a report that one speaker suggested to us was upset with us for asking the organization he is associated with to pay for him speaking at our conference.  Imagine: we hope to be able to pay our bills and expand attendance at the conference via advertising.  Sorry for any offense.  That’s the math.   It takes money to pay the expenses of a conference.  Without the money, no conference.

Plenty of organizations seek your financial support to promote their issue or cause.  Now here’s a much less expensive way to have a conference to promote their cause – to share the expense of an already existing conference, most often within easy drive of the national headquarters of the group.  We would love it if a group you support gets a message from you suggesting that they co-sponsor or sponsor ($500) a future Freedom Leadership Conference.

If you purchased a dinner ticket and cannot attend the new date of Thursday, 2/4 we will gladly issue you a refund, just email us at RSVP@FreedomLeadershipConference.org and indicate your name and the address where we should send a check (unless you paid online in which case we may be able to figure out how to reverse the credit card charge and save the fee to be paid to Eventbrite).