Obama CIA calls the conduct of Secret Soldiers of Benghazi “Shameful” as Station chief who ordered them to Stand Down, is given a medal, Hillary Clinton calls them Liars 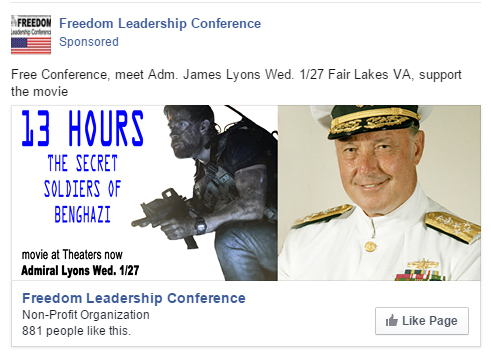 This ad will run the Monday and Tuesday before the Wed. 1/27 conference thanks to the sponsorship of Uniformed Services League and GrasstopsUSA.

Our final advertising on Facebook to promote the Conference this Wednesday, January 27 featuring Admiral James Lyons (USN, Ret.) has kicked in this morning with this display ad scheduled to be viewed by those who are Facebook Fans of over 150 different organizations and interests.  The conference theme is the movie 13 HOURS: The Secret Soldiers of Benghazi which started showing in theaters this month.

Former Secretary of State Hillary Clinton has said the surviving former special operations warriors whose story is told – including the fact that their calls for emergency military support from the U.S. government while they were under attack by terrorists for 13 hours in Benghazi as shown in the new fact based movie are liars.  She says the families which report what happened – including the two private contractors who died defending the U.S. compound – are also liars.

Barack Obama’s CIA called their conduct “shameful” reports Megyn Kelly on Fox TV this week.  Incredibly, the bureaucrat-CIA station chief who ordered the 6 former spec ops warriors under his command as “private contractors” to STAND DOWN three times as shown in the movie, was given a medal.  It is time for you and all of us to STAND UP and to speak out for the courageous “secret soldiers of Benghazi” and demand an accounting.

This monthly Freedom Leadership Conference is co-sponsored by Uniformed Services League and GrasstopsUSA, both of which are prior conference co-sponsors.  Admiral Lyons and Michael Pregent, both of whom have made frequent appearances on Fox TV and other major media outlets as critics of President Obama and advocates for a strong national defense, are presented as speakers by Uniformed Services League.  GrasstopsUSA is again presenting its President, Christopher Carmouche, as its speaker.

The Conference is free from 7 to 9 PM with a suggested donation of $5 at the door to help pay for the room at the Marriott Residence Inn, Fair Lakes, VA.  To join in the small, private dinner with Admiral Lyons, the conference speakers and conference leadership, you must reserve your ticket in advance (paying for it in advance saves you money or you can pay at the door).

The movie 13 HOURS: The Secret Soldiers of Benghazi is highly recommended, whether you watch it before or after this Conference where it is the main theme.

We have issued invitations to a number of other pro-defense and conservative organizations to join us and STAND UP on this topic, but all of them report they do not have funds to help promote the movie and the conference this Wednesday.  Past Conference Sponsors are invited to attend and provide a speaker for up to 5 minutes at the Conference or 10 minutes at the dinner.

For more information or to RSVP:

To simply reserve your ticket for either the conference or the dinner you may also send an email to: RSVP@FreedomLeadershipConference.org.  Be sure to indicate if you wish to reserve for the conference, or for the dinner, or both and don’t forget your name and your zip code and how many seats you want held.