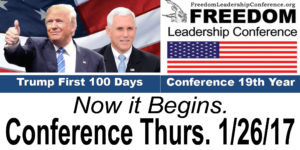 The Freedom Leadership Conference celebrates the start of its 18th year of continuous operation and of President Donald Trump’s first 100 days on January 26 from 7 to 9 PM at an upgraded and larger venue from 2016 at the Wingate by Wyndham Chantilly/Dulles Airport off Route 50 near Route 28 at 3940 Centerview Drive, Chantilly, VA.  The nearly-free conference (only $5 admission at the door) will be co-sponsored by The Center for Security Policy, the Madison Project and by US Intelligence Council, each of which presents a speaker (RSVP to attend HERE).

A panel discussion will be moderated by US Intelligence Council Program Director Richard Buck (who is also the Conference Event Coordinator) and co-sponsored by Center for Security Policy and United States Intelligence Council, “The First 100 Days of President Trump: Counter Jihad Panel.”

The Center for Security Policy, as co-sponsor of this month’s Conference, presents on this panel, Kyle Shideler, CSP Director of the Threat Information Office on the history and doctrine of the Muslim Brotherhood; the proposed Designation Act sponsored by Sen. Ted Cruz, and how this legislation helps the counter-terrorism efforts of President Trump.

The U.S. Intelligence Council, as co-sponsor of this month’s Conference presents, presents on the same panel, Clare Lopez, CSP Vice President for Research & Analysis, CSP on the Iran Threat to United States Vital National Security Interests and what President Trump can do.

A third speaker on the subject First 100 Days of President Trump: At last – Limiting Government will be presented by this month’s third conference co-sponsor, Madison Project with their Abby Blocker, MC Outreach Coordinator, speaking on “How President Trump can be successful where conservatives have failed to limit government for the last 50 years.”

The Freedom Leadership Conference began in 1999 in southern California as the Western Conservative Conference with speakers such as the architect of the Reagan revolution, the late Lyn Nofziger, a variety of Congressmen and California State legislators as Honorary Conference Co-Chairmen and over 30 leading conservative, national defense, patriotic and values interest groups as primary sponsors, sponsors and co-sponsors during the first three years.  The conference moved east after its first three years where it became the Freedom Leadership Conference, now meeting at least quarterly as a smaller conference co-sponsored by just several groups in a new weeknight format.

The conference met more often in recent years – five times last year – as the demand by sponsors for a conference date increases.  To accommodate that increasing demand Freedom Leadership Conference held its first all-day conference in northern Virginia which was a “standing room only” success with keynote remarks by Governor James Gilmore at the new upgraded and larger venue at the Wingate by Windham in November after four consecutive “standing room only” events on weeknights during 2017 at the Marriott Courtyard of Fair Lakes, VA.

For this January 27 conference there is a $5 event fee and no meal function, with the event running from 7 to 9 PM, doors open 6:30 PM and a requirement for an advance RSVP to attend (without which no one is admitted).  You may use RSVP@FreedomLeadershipConference.org on the condition that you provide your full name, zip code and how many will attend with  you, with their names, or use our convenient Eventbrite page/link HERE (http://FLC2017Jan.eventbrite.com).

Additional Speakers at every conference on these topics:
The Thurmont Statement of Conservative Principles,
Saul Alinsky Smear of the Month Award for one leftist
Conference Purposes and Membership Benefits
Brief reports by leaders of other conservative cause organizations welcome (priority to past sponsors)
How to be a Conservative Volunteer (Lightning Round 1 min. each – Tell us your recent experience)
(*to volunteer to speak on any of these topics please write to EventCoordinator@FreedomLeadershipConference)