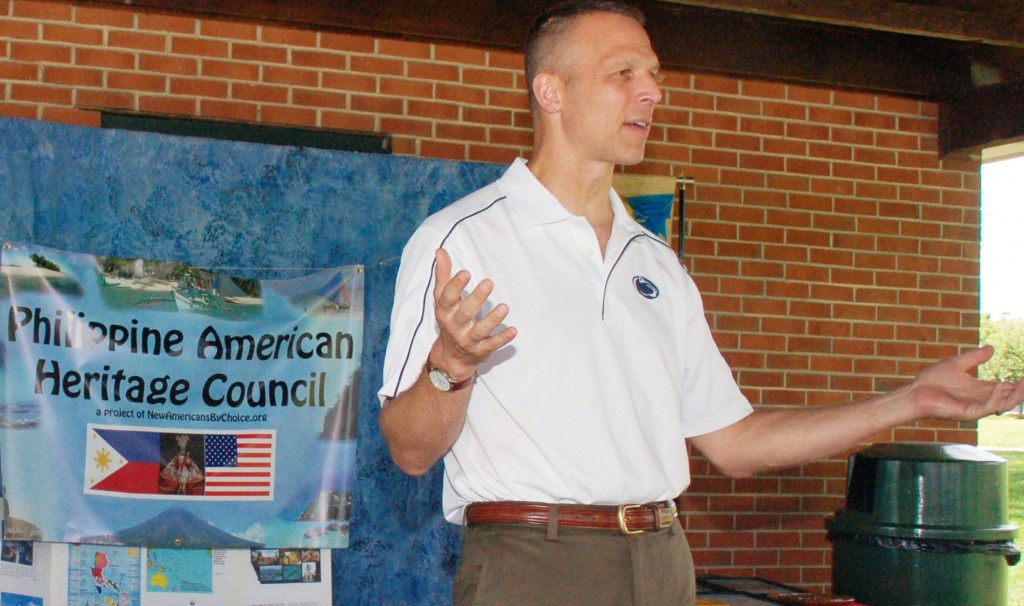 Congressman Scott Perry spoke at 2nd annual summer picnic of the Philippine American Heritage Council this past summer, which is a past co-sponsor of Freedom Leadership Conference

U.S. Rep. Scott Perry to be Keynote Speaker in Fairfax, Virginia next Wednesday to “Salute our Servicemembers”

The top conservative Congressman from Pennsylvania – as rated by Heritage Action – will be visiting Northern Virginia to receive the “Freedom Leadership Award” and deliver keynote remarks at a post Veterans Day “Salute to our Servicemembers” at the Freedom Leadership Conference at the Fairfax, Marriott at Fair Oaks, Virginia next Wednesday evening, November 13.  The Conference this month is sponsored by Uniformed Services League and will also include a panel of retired military officers led by Lt. Colonel Tim Hanigan, USMC (Ret.).

Congressman Perry will also speak about the continuing and increasing threats to those who wear the uniform and serve the United States as their work brings them around the world.  One such threat of special concern to the sponsor organization, Uniformed Services League, is the International Criminal Court, where the rights of American servicemembers accused of a crime in a foreign country are not protected.

At his request, the schedule has also been opened up to allow for a “Questions and Answers” from the audience after Congressman Perry’s remarks.  One question sure to be asked is about the Congressman’s “no” vote on funding Obamacare and increasing the debt limit in October.

The conference is free but requires advance registration (and a suggested donation for conference expenses of $5 at the door), which may be done online HERE.  A flyer with more details about the conference is HERE, and the more detailed announcement story is HERE.

First term Representative Scott Perry (R-PA) voted with the majority of Republican members of the House of Representatives and with leading conservative Republican Senators against the recent Obama debt increase and Obamacare funding proposals, which passed and was signed into law in October.  You can thank him by “liking” his Facebook page or better yet, by attending the Conference and thanking im in person next Wednesday, register HERE.

“Those who voted for Obamacare in October literally own it,” said Richard Buck, Freedom Leadership Conference Event Coordinator.  He continued, “As the mess grows, and as more and more people realize how Obamacare is hurting them, Congressman Perry will be able to stand tall knowing he did the right thing in October.  We are proud to recognize him for his courage and doing what he was elected to do, with the Freedom Leadership Award.”

We present two articles about this topic for those who wish to know more about Representative Perry – one a story in a local district newspaper about him and the second, the text of his remarks following his “no” vote on funding Obamacare and the debt increase.

He voted no on legislation to end shutdown, raise debt limit

U.S. Rep. Scott Perry, R-York County, said he thinks Congress took more blame than it deserved for the partial federal government shutdown and the nation coming close to breaching the debt ceiling. He said he thinks that will influence future debates.

“I think the spectre of shutdown is behind us,” Perry said in a phone interview Thursday. “… I think that takes that off the table for the Congress.  I don’t know if that’s a good thing or a bad thing. It gives the administration an upper hand.”

Perry on Wednesday voted against legislation to reopen the federal government and raise the government’s borrowing limit. The legislation passed the Senate 81-18 and the House 285-144.

We are pleased to present the full text of the statement by Congressman Perry, issued after his voting “no” on funding Obamacare and raising the debt limit without corresponding spending cuts, below.

We Can’t Keep Spending Money We Don’t Have

“Collectively, Washington has once again avoided the tough decisions needed to reduce our unsustainable debt and strengthen the economy for all Americans. This is a clear failure of leadership on behalf of the Obama Administration and Congress.

During my first month in office, I supported a clean debt ceiling extension without condition because I sincerely wanted to give all parties time to reach a reasonable compromise to avoid default and start addressing both our near-term spending and long-term debt crisis. The lack of willingness on behalf of the Obama Administration and Senate Democrats to engage whatsoever in that process leads me to believe they have no sincere interest in addressing these pressing issues. As a result, the legislation before us tonight is tantamount to accepting the failed policy of endless borrowing from China, Japan and the Social Security Trust Fund to satisfy an ever expanding government bureaucracy.  I can’t support that.

Although we’ll all be glad when this current impasse is over, the fundamental issues at hand remain unchanged:  we’re nearly $17 trillion in debt and are in the process of bankrupting programs like Social Security and Medicare. Democrats and Republicans must finally end the process of kicking these difficult issues down the road for someone else to deal with. Our debt is hurting our ability to create family-sustaining jobs right now, it’s a national security threat and it’s making us uncompetitive globally. We simply can’t keep spending money we don’t have.

In the last few days, I’ve been called an extremist for advocating ideas that President Obama and Senate Democrats said they would not accept. Yet the U.S. House has said we’d no longer ignore our skyrocketing national debt. That didn’t stop President Obama from sending us unbalanced budgets that not only failed to address this crisis, but exacerbated it – budgets that didn’t even receive reliable support from fellow Democrats. Only House Republicans offered a credible plan to address these issues. Yet, somehow driving our nation into the abyss of unrecoverable debt and handing the bill to future generations isn’t considered extreme.  That’s incredible to me.

Since my first day in office, I’ve sought opportunities to work with colleagues on both sides of the aisle to address these issues. I supported common-sense solutions to control spending on the fastest-growing parts of our budget, grow our economy and create opportunity for all Americans, while reducing government regulation of small businesses and our healthcare. Most of these proposals had the support of Democrats and Republicans.

Much of this recent debate centered on House Republican opposition to Obamacare. I supported efforts to repeal and defund the law because countless local small business owners told me it would cost jobs in our district. The vast majority of my constituents shared their opposition.

While I strongly advocated for my constituents’ concerns, I understood the political reality of what was possible, and worked with my colleagues to seek a compromise. That’s why, prior to the government shutdown, I supported legislation that kept the federal government open and called for a one-year delay of the Obamacare mandate that every American citizen must buy health insurance. This came months after President Obama, without Congressional approval, unilaterally delayed the employer mandate for a year; it’s reasonable to ask that individual citizens be given the same protection that has already been granted to big business. The President and Senate Democrats refused to even consider this proposal.

It’s time to get America moving again. I have never pretended to have a monopoly on good ideas and remain willing to work with anyone who has a credible proposal to spur economic growth, create jobs and address the crushing debt burden we’re mounting for ourselves and for future generations.

I strongly encourage all citizens to remain engaged in this process and demand leadership from their elected officials, including me.”

The Conference board will shortly decide whether to continue as a monthly, a quarterly or an annual conference in 2014.  Organizations which may wish to sponsor one of the monthly conferences in 2014 if that is continued, may write to EventCoordinator@FreedomLeadershipConference.org.