Candidate for Governor Stewart Addresses a standing room only crowd of conservatives, helps attract largest crowd of the past year

Capital Research Center to Sponsor next conference on March 16, on “Follow The Money – who is paying for the campaign to destabilize Trump Administration?”

We are pleased to provide you with the full and unedited video of the remarks of Corey Stewart, candidate for Governor of Virginia at the Thursday, February 16, 2017 Freedom Leadership Conference in Chantilly, VA as part of the Governor Forum sponsored by Americans for the Trump Agenda and Fairfax Free Citizen at the Wingate by Wyndham Hotel in Chantilly, Virginia. 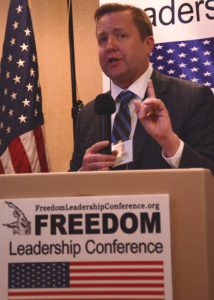 Corey Stewart received an enthusiastic response from conservatives in this 2nd meeting of the 18th year of the Freedom Leadership Conference where he was one of the principal speakers.  Stewart’s campaign manager asked us to pass on to you his post-conference statement, “”Honored to have been invited to the Freedom Leadership Conference filled with fellow Donald Trump supporters. I also am honored to have won the straw poll, it shows that grassroots momentum for our movement to take back Virginia is growing quickly.”

The Prince William County Board of Supervisors Chairman had dinner with conference attendees and then spoke to the full conference, after which he won the straw poll vote with 39.2% of the vote.  He received a rousing introduction by conference co-sponsor, Fairfax Free Citizen Editor Tim Hannigan.

The button handed out free to dinner attendees by Americans for the Trump Agenda at the Freedom Leadership Conference on Feb. 16, was sported by both candidates for Governor who spoke to the conservatives, Denver Riggleman and Corey Stewart.

The question asked of all four candidates at the Feb. 16 “Governor Forum” – with Stewart and Riggleman making an appearance to answer – was, “how would you help enact the Trump agenda as Governor of Virginia.”

Stewart enthusiasts who came to support their candidate and vote for him helped swell the conference beyond the full capacity attendance of the past six conferences in a row including all 2016 events, to a standing room only event.

Corey Stewart also spoke to the Freedom Leadership Conference on August 2, 2010.  His past remarks included his announcement of Virginia legislation to echo what he had already done as Prince William County Chairman to enable law enforcement officers to actually uphold rather than ignore the law regarding illegal aliens in America.   His stance on illegal aliens ended up becoming a major campaign platform over five years later for Donald Trump, who he served as state campaign chairman for.