Candidate for Governor Riggleman Addresses a standing room only crowd of conservatives, helps attract largest crowd of the past year

Capital Research Center to Sponsor next conference on March 16, on Follow The Money – who is paying for the campaign to destabilize Trump Administration? 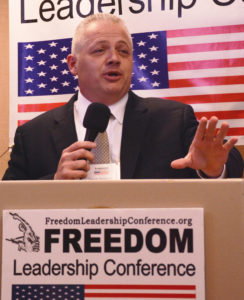 We are pleased to provide you with the full and unedited video of the remarks of Denver Riggleman, candidate for Governor of Virginia at the Thursday, February 16, 2017 in Chantilly, VA as part of the Governor Forum sponsored by Americans for the Trump Agenda and Fairfax Free Citizen at the Wingate by Wyndham Hotel in Chantilly, Virginia.

Candidate Denver Riggleman spoke to the conference and then surprised everyone by winning a commanding 2nd place in the conference straw poll with 31.4% of the vote among the four candidates, ahead of the more well known and better financed Ed Gillespie’s 29.4% of the vote.

A private business owner, and military veteran who continues to do consulting work with the U.S. Department of Defense, Denver Riggleman missed having dinner with conference attendees but then stayed past the conference adjournment at 9 PM to chat informally with attendees after his very well received speech in this 2nd meeting of the 18th year of the Freedom Leadership Conference where he was one of the principal speakers.

Riggleman enthusiasts who came to support their candidate and vote for him helped swell the conference beyond the full capacity attendance of the past six conferences in a row including all 2016 events, to a standing room only event.

Denver Riggleman began the race as a virtual unknown but has already attracted sufficient support to enable him to finish past Ed Gillespie, who began the race with frontrunner status from his past, unsuccessful run for state office in Virginia.  His campaign operatives include some of the key campaign leaders for Trump for President and other well known conservatives.  One key Riggleman supporter said his candidate is the only one who hasn’t spent his life as a government employee or political party operative but comes closest to offering the Donald Trump combination of outsider and successful, problem-solving businessman.

Gillespie’s campaign also sports the endorsement of some well known and respected conservatives like Morton Blackwell.  Riggleman supporters point to how little good such endorsements did for Jeb Bush in last year’s GOP primary and say that like Donald Trump, their candidate has been a successful businessman and is clearly the “outsider” in this race.