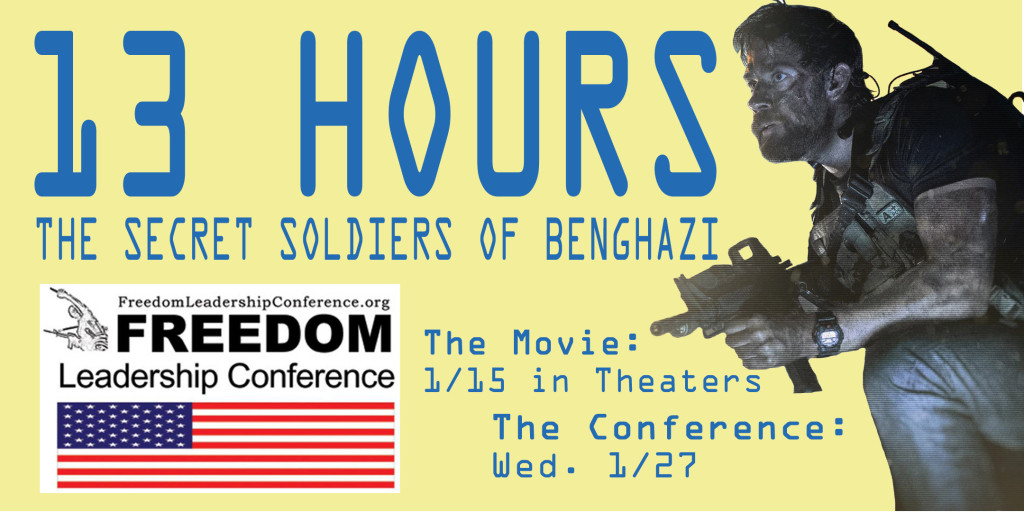 The Uniformed Services League and GrasstopsUSA will co-sponsor “13 Hours the Conference” at the Marriott Fair Lakes Residence Inn urging Americans to Learn more, take a stand at this first Freedom Leadership Conference of 2015.  Movie promotions feature the tag line, “When everything went wrong, six men hd the courage to do what was right.”  Michael Pregent, Former Army Intelligence Officer and guest on CNN and Fox TV and a panel of Retired Military officers will be presented by Uniformed Services League moderated by attorney Jon Moseley, Esq., while Christopher Carmouche, its President, will speak for GrasstopsUSA.

13 Hours: the Secret Soldiers of Benghazi, focuses on the story either covered up or ignored by most of the major news media – the private contracts who as former Special Operations soldiers could not ignore the calls for help coming from the U.S. consulate in Benghazi, disregarded the orders to “stand down” and went into the battle expecting that the United States would never abandon its own Ambassador and those working under the American flag.

The Conference Flyer is available HERE, and a direct RSVP link to reserve or to purchase dinner tickets or reserve free conference discounts is HERE – note there is a discount price for advance purchase of dinner tickets with the speakers.

The conference runs from 7 PM to 9 PM with doors open at 6:30 PM, and while it is free there is a suggested $5 donation at the door at the private conference, which reserves the right to deny admission with or without cause.  There is a dinner in honor of the speakers at 5:30 PM to 6:30 PM with doors open at 5 PM.  Conference Host Committee Members ($100) and Host Committee Co-Chairmen ($250) would help defray the expenses of promotion of the movie and the conference.  An email reply will reserve either a dinner ticket or a place at the conference RSVP@FreedomLeadershipConferenc.erg although it is strongly suggested that people should take advantage of the discounted price for advance ticket purchase.

The movie from Michael Bay,“13 Hours: The Secret Soldiers of Benghazi” is in theaters starting on January 15 and conference organizers hope it is a box office success.  “When everything went wrong, six men had the courage to do what was right” in Benghazi, reports some of the movie-promotional material circulated by the conference.

Reserve to Attend 13 Hours: the Conference

Christopher Carmouche spoke at a past conference sponsored by his GrasstopsUSA on this theme.  Uniformed Services League is concerned about the safety and security of uniformed American servicemen and the contractors who support them as was seen in Benghazi.

Additional speakers will be announced for the Retired Military Officers panel sponsored by Uniformed Services League.

The Freedom Leadership Conference has had over 60 conservative, patriotic and pro-defense non-profit organizations and some businesses which support them or report on them as sponsors of the conference since it began in 1977 as the Western Conservative Conference in southern California.  Sponsors have included The Washington Times National Weekly Edition, Gun Owners of America, Human Events, Traditional Values Coalition, U.S. Justice Foundation, American Conservative Union, Concerned Veterans for America, Conservative Caucus, Thomas Jefferson Institute, Legal Affairs Council, Citizens Committee for the Right to Keep and Bear Arms and the Religious Freedom Coalition over the past 17 years.

The Conference moved to the east coast after its third year and later changed its name to Freedom Leadership Conference, adopting a “Thurmont Statement of Conservative principles” on its 10th year anniversary in 2009 in Thurmont, MD.  The conference changed to a smaller, monthly format sponsored by one or several sponsor organizations in 2012 and now meets in Northern Virginia 6 to 8 times per year.

Additional Conferences after January 27 will also be held at the Marriott Fair Lakes Residence Inn, on Wednesdays, on 2/17, 3/16, 4/13, 3/11 and 6/16.  Organizations which are interested in sponsoring a conference can write to Chairman@FreedomLeadershipConference.org.  The conference SPONSOR fee is $500 which helps cover the expense of the meeting room and some limited promotion of the conference, the sponsor organization, the speaker they provide and their theme for that month’s conference.  Co-Sponsors ($250) help defray the expense of the conference and are given a more limited amount of microphone time.

The Conferences begin with a dinner at 5:30 PM and then the conference starts at 7 PM and ends at 9 PM.