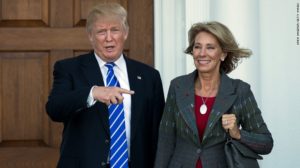 Betsy DeVos with President Donald Trump after she was announced as his nominee for Secretary of Education.

The biggest and most successful campaign of those who want to obstruct the administration of President Donald Trump is on the verge of success this morning with a vote taking place within the next hour on his nomination of Betsy DeVos to be Secretary of Education.  Americans for the Trump Agenda urges every conservative to telephone their two U.S. Senators this morning without delay and urge a YES vote.  If you watch tonight’s TV news and see a first big defeat at the hands of the Senate for President Trump and you didn’t make those two phone calls you will regret it.  Please make that call:  (202) 224-3121.

There is no Presidential nominee more committed to change than Education Secretary designate Betsy DeVos, who has spent decades of her life helping campaign for school choice and an end to the monopoly control of our schoolchildren by big government, big labor union bosses who always support the Democratic Party.  That explains why they are going all out to defeat this nominee.  That explains why two Republican traitors in the U.S. Senate have bowed to the leftwing pressure and have announced they will vote with the Democrats to defeat this nomination.

Call (202) 224-3121 twice this morning, once for each of your two U.S. Senators and demand they vote YES on the nomination of Betsy DeVos for Secretary of Education.

And there are two more things you can do to help support the Trump Agenda.

First, if you are able to, you should attend next Thursday’s Freedom Leadership Conference being co-sponsored by Americans for the Trump Agenda in Chantilly, Virginia.

This conference poses the question to the four candidates for the GOP nomination for Governor, “how would you help enact the Trump Agenda as Governor?”

One candidate – Prince William County Board of Supervisors Chairman Corey Stewart – has confirmed he will speak.  Another two have said it is on their schedule.  A third said he is trying to change his schedule to attend.  The chances are good that you will meet the next Governor of Virginia next Thursday in Chantilly, Virginia.

You will also have the chance to vote for your favorite at the conference after hearing the speakers.

For the conference flyer HERE.

For a recent article with more details at the conference:

Corey Stewart Confirms for Feb. 16 Conference;
Becomes first candidate for GOP nomination for Governor to accept invitation of Freedom Leadership Conference Co-sponsor Americans for the Trump Agenda;
All 4 candidates invited, Three tell us Conference is on their schedule, another candidate reported ready to confirm within next 24 hours, to tell us how as Governor they would help enact the Trump Agenda?
Read the entire article HERE.
**

The second thing you can do to help us enact the Trump Agenda is to make a donation to help us pay for our work, such as next week’s conference, this website and our efforts to help confirm Trump nominees for the cabinet.

You can donate HERE.

Thank you for your help to enact the Trump Agenda.