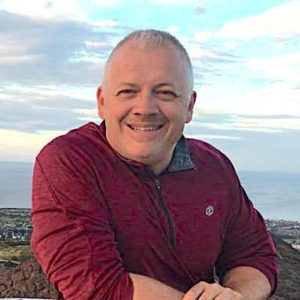 Candidate for the GOP nomination for Governor of Virginia Denver Riggleman, is announced today as a speaker at the Freedom Leadership Conference of 2/16 in Norther Virginia, sponsored by Americans for the Trump Agenda, aka TrumpYes.org.

Denver Riggleman, candidate for the nomination for Governor in the Republican June primary, will address the Thursday, February 16 Freedom Leadership Conference that runs from 7 to 9 PM at the Wingate by Wyndham Hotel off Route 50 near Route 28 at 3940 Centerview Drive, Chantilly, VA, co-sponsored by Americans for the Trump Agenda. 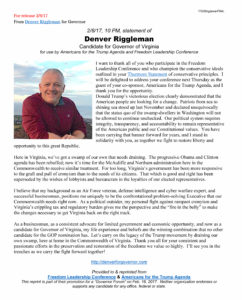 Statement of Denver Riggleman, candidate for Virginia Governor, upon accepting invitation to speak to the “Governor Forum” of Freedom Leadership Conference on 2/16/17.

Yesterday it was announced that Prince William County Board of Supervisors Chairman Corey Stewart had confirmed that that he will speak at the conference, marking his second appearance.  Candidate Ed Gillespie’s staff reports that the conference is on their schedule, while the staff of the fourth candidate, State Senator Frank Wagner, tells us that he is “trying” to put the conference on his schedule.  The event requires advance registration for admission, whether it is for the 7 to 9 PM conference (doors open 6:30 PM) or the earlier dinner 5:30 to 6:30 PM (doors open 5 PM) for conference speakers and leadership. Register HERE.  Conference Flyer HERE.  (Early bird discount – save $5 per person or $10 for a couple for dinner, expires tonight Wed. 2/8).

Showing he is ready and indeed very eager to answer the question posed by Americans for the Trump Agenda for candidates who can speak to this “Governor Forum” next Thursday, “which candidate can best help enact the Trump Agenda as Governor of Virginia,” candidate Denver Riggleman provided us this exclusive statement directed to conference attendees, subscribers, supporters and conservatives in Virginia:

(David Riggleman) “I want to thank all of you who participate in the Freedom Leadership Conference and who champion the conservative ideals outlined in your Thurmont Statement of conservative principles.  I will be delighted to address your conference next Thursday as the guest of your co-sponsor, Americans for the Trump Agenda, and I thank you for the opportunity.

“I stand in solidarity with you, as together we fight to restore liberty and opportunity to this great Republic.”

“Donald Trump’s victorious election clearly demonstrated that the American people are looking for a change.  Patriots from sea to shining sea stood up last November and declared unequivocally that the status quo of the swamp-dwellers in Washington will not be allowed to continue unchecked.  Our political system requires integrity, transparency, and accountability to remain representative of the American public and our Constitutional values.  You have been carrying that banner forward for years, and I stand in solidarity with you, as together we fight to restore liberty and opportunity to this great Republic.

“Here in Virginia, we’ve got a swamp of our own that needs draining.  The progressive Obama and Clinton agenda has been rebuffed; now it’s time for the McAuliffe and Northam administration here in the Commonwealth to receive similar treatment.  For too long, Virginia’s government has been more responsive to the graft and pull of cronyism than to the needs of its citizens.  That which is good and right has been superseded by the wishes of lobbyists and bureaucrats in the loyalties of our elected representatives.

“I believe that my background as an Air Force veteran, defense intelligence and cyber warfare expert, and successful businessman, positions me uniquely to be the confrontational problem-solving Executive that our Commonwealth needs right now.  As a political outsider, my personal fight against rampant cronyism and Virginia’s crippling tax and regulatory burden gives me the perspective and the “fire in the belly” to make the changes necessary to get Virginia back on the right track.

“Let’s carry on the legacy of the Trump movement by draining our own swamp, here at home in the Commonwealth of Virginia.”

“As a businessman, as a consistent advocate for limited government and economic opportunity, and now as a candidate for Governor of Virginia, my life experience and beliefs are the winning combination that no other candidate for the GOP nomination has.  Let’s carry on the legacy of the Trump movement by draining our own swamp, here at home in the Commonwealth of Virginia.  Thank you all for your consistent and passionate efforts in the preservation and restoration of the freedoms we value so highly.  I’ll see you in the trenches as we carry the fight forward together!”

The last five Freedom Leadership Conferences of 2015 were at full capacity and the “Governor Forum” version of 2/16 is expected to also be a full capacity crowd.  Be sure to reserve your seat now.  Register HERE.  Conference Flyer HERE.

Important note: Neither the conference nor its 2/16 sponsors endorse or support any candidate for any federal, state (or any other) office.  We would be delighted to pass on any messages of interest to our readers about the participation by any of the candidates for Governor in the conference next Thursday evening, write Chairman@FreedomLeadershipConference.org.