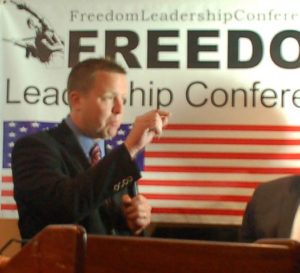 Corey Stewart at Freedom Leadership Conference on Aug. 2, 2010, defending the Rule of Law in America

All 4 candidates invited, Three tell us Conference is on their schedule, another candidate reported ready to confirm within next 24 hours, to tell us how as Governor they would help enact the Trump Agenda?

Americans for the Trump Agenda has announced that Corey Stewart, candidate for the Republican nomination for Governor of Virginia in the June primary, has confirmed to speak at the Freedom Leadership Conference they will co-sponsor on February 16, 2017 at the Wingate by Wyndham Hotel, Chantilly, Virginia.  All four candidates for Governor had been invited and three of the four have said that the event is on their schedule but Corey Stewart, in a strong bid for conservative Republican support, is the first one to confirm he will address the gathering.  (to attend click HERE; advance registration is strictly required for admission). 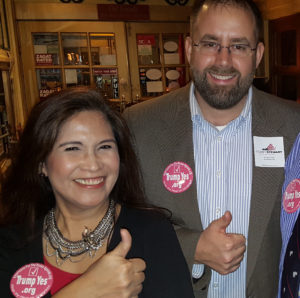 Corey Stewart Campaign Manager Spence Rogers (center) gives a “thumbs up” that he has the 2/16 conference on the Corey Stewart schedule at his candidate announcement event recently, with Conference Chairman Emy Delgaudio, wearing the new “Trump Yes” button of conference co-sponsor Americans for the Trump Agenda.

Corey Stewart’s campaign manager, Spence Rogers, told us that his candidate best appeals to those last year who supported either Donald Trump or Ted Cruz for President.  Rogers should know about Ted Cruz since he helped him win the Iowa primary before Trump bounced back to win the GOP Presidential primaries and the Presidency.  And Rogers points to the fact that his candidate supported Donald Trump before anyone, serving as his official state chairman for Virginia.  Spence is a decorated combat veteran (Bronze Star) and former member of the elite U.S. Army Rangers.

But those who want to make the case for Corey Stewart for Governor to conservatives can go much further back than 2016 and listening to Spence Rogers and to candidate Corey Stewart’s speeches this year, to show their candidate’s credentials.

We ordinarily do not allow microphone time for candidates in primaries so as to avoid the appearance of favoritism, nor do we allow those who are seeking your signature on petitions to use this non-partisan issues conference for this purpose for the same reason.  The 2/16 Freedom Leadership Conference is the EXCEPTION:

Do you need GOP voters to sign your petition?

At this conference ALL candidates for Governor have been invited to speak, and ALL candidates who seek a spot on the GOP primary ballot and who need you to sign their petitions to quality, are invited.  We will have two tables set aside to facilitate such petition signings and we invite and welcome all candidates (equally) to attend with their petitions for this purpose.  If time on our agenda permits we will also allow a “1 minute Lightning Round” to say something about the candidate of your choice – whether it is the candidate himself speaking or a supporter seeking petition signatures to qualify for the ballot.  After this conference our normal rule prohibiting such activity is back in force. 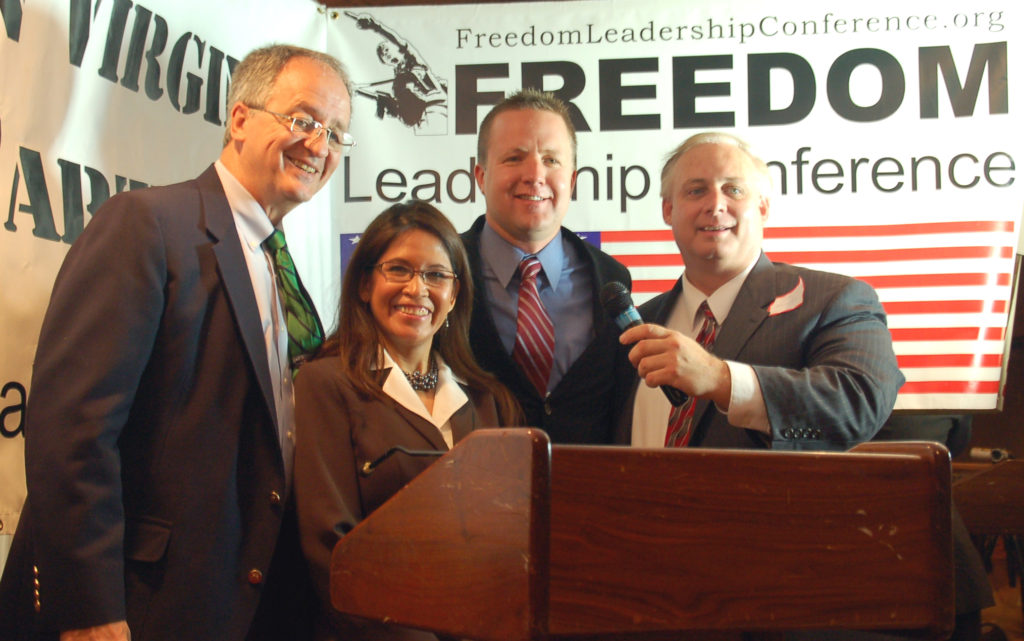 When Corey Stewart stepped up to the podium to speak at the August 2, 2010 Freedom Leadership Conference in Northern Virginia, most Americans, including his audience, were already aware that the idea of law enforcement officers being able to detain and arrest those who came to America illegally, was under fire in Arizona.

The Obama Administration argument back in 2010 was that the new law passed in Arizona – nicknamed at the time “The Arizona Law” – authorizing their law enforcement officers to actually enforce the law, should be ruled unconstitutional by a federal court.

The hot news at that conference in 2010 was this: Corey Stewart as Chairman of the Board of Supervisors of Prince William County, had already enacted the same type of law under attack by the liberals in his own county.

That 2010 event, nicknamed “Celebrate Arizona Day and the Rule of Law” was the venue chosen by Corey to unveil his new proposal that the same thing should be done by Virginia – enforce the law.  It was a packed room with standing room only – a Freedom Leadership Conference co-sponsored by American Border Control and the Northern Virginia Tea Party.

Corey’s remarks that day in 2010 were also augmented by his interview in the hallway of the conference with Fox TV which aired his remarks defending Arizona’s Rule of Law and his intention to also defend the rule of Law in Virginia as well.

Corey Stewart in his campaign emphasizes other issues of interest to conservatives  besides his longstanding defense of the rule of law and the idea of actually enforcing laws already on the books.

Corey Stewart’s twitter feed for example, as this article was being prepared, said “Virginians believe that life is precious.  As your governor, I will always fight for life.”

His supporters also point to the fact that Corey Stewart has repeatedly won reelection in a county that is strongly “blue” and that having a conservative who knows how to attract the support of independents and even Democrats is essential for any candidate who hopes to win as Governor in a Virginia which voted against Trump last year and has repeatedly elected Democrats in recent years.

The Freedom Leadership Conference co-sponsor, Americans for the Trump Agenda, asks candidates for Governor to answer the question, how would you best help enact the Trump agenda as Governor of Virginia?

Corey Stewart’s website already shows one answer to that question – he has repeatedly shown he supports the Trump Agenda, such as when he issued a public statement of support praising President Trump’s nomination of Judge Neil Gorsuch to the Supreme Court.  “The nomination of Neil Gorsuch is a major win in the fight to protect the unborn, a huge win for social conservatives across the United States, and represents another campaign promise President Trump has delivered,” Stewart said.

“Every day in Virginia, 57 babies are aborted,” Stewart said. “That number must be reduced as much as the law allows, even if that requires sending challenges to the Supreme Court.”

“President Trump won his election because of his commitment to protect life and to appoint a jurist such as Neil Gorsuch, who understands innocent life must be protected,” Stewart said. “All Virginians should welcome Gorsuch’s selection because of his dedication to life and should welcome any legal challenges that could ultimately result in the overturning of Roe and the reduction of abortions in the Commonwealth.”

Neither Americans for the Trump Agenda nor the conference it sponsors, endorses candidates for office.  The 2/16 Conference has invited all four candidates to speak but Corey Stewart is in fact the first one to go beyond telling us that it is on the schedule (as 3 of the 4 have told us – the 4th said that they are trying to change their schedule to be able to attend) to confirming he will in fact, firmly commit to being with us on February 16.

We will have another announcement tomorrow of a firm commitment by a second candidate but right now in this space we want to acknowledge the candidate for Governor who has already spoken at a Freedom Leadership Conference nearly seven years ago, has spoken out for some of the issues we find most important, and who has now honored us by his commitment to attend and speak and ask for our votes on February 16.

There will be a secret ballot straw poll vote for Governor after all the candidates who choose to attend have spoken to the conference with the winner announced before 9 PM adjournment.  The conference begins at 7 PM with doors open at 6:30 PM, and a strict requirement for advance RSVP for admission.  There is also a dinner for all speakers from 5:30 PM to 6:30 PM at the same location, with doors open at 5 PM.  All dinner ($35) and conference tickets ($5) are expected to sell out before the conference.

If meeting the next Governor of Virginia – whether to make up your mind if you want to support him or if you already do then to show your support for him and vote for him – is important to you please be sure you sign up immediately before ticket sales are closed.  Those on the host committee ($100) will be seated at a table with one of the candidates for Governor until those seats are filled (register HERE).  Presently there are four seats available at the table of eight with Corey Stewart or at the table of one of the other candidates we anticipate confirming to attend within the next 48 hours.  Don’t wait for that to happen – as more speakers confirm less tickets will remain available. 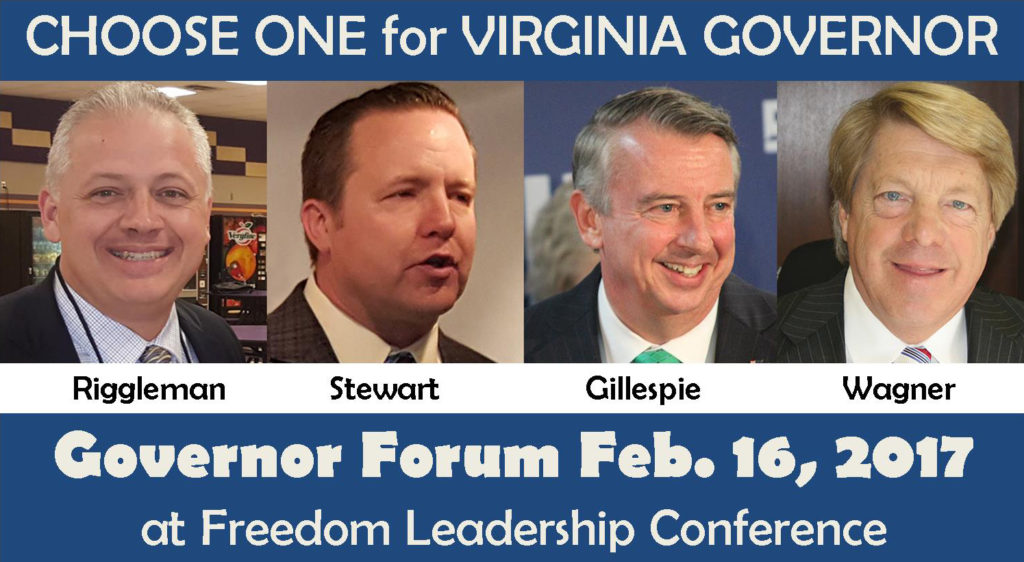 All four candidates for Governor of Virginia have been invited to speak to the 2/16 Freedom Leadership Conference. Three told us we are on their schedule. Corey Stewart is the first to confirm he will attend for certain.