Call your Senators to Confirm Sessions as Attorney General 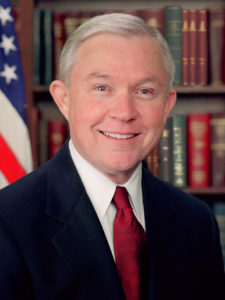 Senator Jeff Sessions, nominated by President Trump to be U.S. Attorney, strongly supported by Americans for the Trump Agenda (TrumpYes.org).

U.S. Senate to vote on Trump nomination of Stalwart Conservative Senator Jeff Sessions for U.S. Attorney General within the next 1 hour.  Call your 2 Senators.

The sponsor of next week’s Freedom Leadership Conference, Americans for the Trump Agenda, says this is the highest priority for Trump supporters right now – to help put pressure on both of your Senators to confirm Sessions.

Liberal Democrat Senator Tim Kaine in Virginia is going to get a strong challenge in 2018, so maybe he will feel the heat from some calls in support of Sessions and vote to support this nominee from President Donald Trump.

Remember, we just lost two Republican U.S. Senators yesterday morning when it came time to vote for the President’s nominee for Secretary of Education, Betsy DeVos.

Both defectors said they had been swamped with votes demanding a NO vote.

If the liberals can keep those two turncoats with them and pick up just one more Republican they can defeat the nomination of Senator Jeff Sessions to be U.S. Attorney General.  Please make those two phone calls right now.

Here is the link to the senate dot gov phone directory that you can send to your friends in other states.

President Trump and America desperately need a strong conservative as U.S. Attorney General to defend this Administration from the liberal-left lawsuits and legal challenges.

And to further support the enactment of the Trump agenda please help us with two more things.

First, if you can, please join us next Thursday at the Freedom Leadership Conference in Chantilly, Virginia co-sponsored by Americans for the Trump Agenda – tonight is the final deadline for the early bird dinner discount (individual save $5, a couple save $10).

Whether it is to listen and help you decide your choice in the GOP primary in June, or to support the candidate you have already chosen, we hope you will attend the conference, 7 to 9 PM (doors open 6:30 PM, only $5 admission) or the conference and also the earlier dinner with our speakers, 5:30 to 6:30 PM (doors open 5 PM, early bird discount expires TONIGHT, Wed. 2/8).  Only those who advance-register will be admitted.

We expect this will be the 7th consecutive Freedom Leadership Conference at full capacity so don’t delay Register HERE.  Conference Flyer HERE.