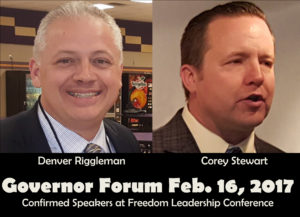 Candidates for Governor Denver Riggleman and Corey Stewart have confirmed to speak at the Governor Forum of Freedom Leadership Conference co-sponsored by Americans for the Trump Agenda on Thurs. 2/16/17 from 7 to 9 PM.

Two candidates who are going all out to appeal to Virginia conservatives as the anti-establishment, pro-Trump alternative to the frontrunner for the Republican nomination to run for Governor in this year’s June primary will square off at a “Governor Forum” at the Freedom Leadership Conference this Thursday, Feb. 16 in northern Virginia.

Conference co-sponsor Americans for the Trump Agenda asks the candidates to answer their question, “which of you would best help enact the Trump Agenda as Governor of Virginia?”  Candidates Corey Stewart and Denver Riggleman have confirmed to speak (register to attend 7 to 9 PM conference for only $5 or dinner 5:30 to 6:30 PM HERE).

The third challenger to the frontrunner, State Senator Frank Wagner, has yet to commit to speaking at the conference which will conclude with a “straw vote” of the self-described coalition conservatives who will be in attendance to listen to the speakers and then try to decide who is best suited to take on the frontrunner, Ed Gillespie, who ran and lost a previous statewide race.  The vote tally will be announced before the conference adjourns at 9 PM.

Ed Gillespie, the frontrunner by virtue of his name recognition from a previous statewide campaign, has only told the conservative conference’s organizers that their event is “on his schedule” but has not given a final commitment to speak.

Virginia is only one of two states in the nation with a statewide race in 2017 and the outcome of the nomination battle as well as the final contest between the GOP nominee and the Democrat, is certain to either weaken or strengthen the hand of President Donald Trump across the Potomac River in Washington DC.

That is something most candidates on both sides of the aisle are seem to agree on.

The Democrat contest also has a frontrunner, a candidate who is a Hillary Clinton liberal versus a challenger who is a Bernie Sanders leftist.  That competition is shaping up as a contest to see which candidate can throw more mud at President Donald Trump.

The Republican contest features a frontrunner who did not strongly embrace Donald Trump during last year’s campaign.  Ed Gillespie did endorse Donald Trump but Trump supporters in Virginia say he did not go all out during the campaign.  If he does not address this concern at Thursday’s Freedom Leadership Conference, it will only strengthen the perception among conservatives, that he will dodge and weave on the subject of supporting the Trump agenda if he were the GOP nominee for Governor of Virginia.

In marked contrast to Gillespie, Corey Stewart’s claim to be the original, homegrown version of Donald Trump has some obvious and apparent basis in fact, such as the photo featured at the Freedom Leadership Conference website from when he spoke before the conservatives on August 2, 2010, to announce his proposal for Virginia legislation to go after illegal aliens the same way he’d done as Chairman of the Prince William County Board of Supervisors well before the Arizona Law was enacted to do exactly that.

The Conference Chairman who spoke with him as the other principal speaker at that 2010 conference, Emy Delgaudio, is of Philippines ancestry and spoke of American exceptionalism and her appreciation for the rule of law.  She will be on hand to greet him when he makes his second appearance at her conference this Thursday (and she will give a warm welcome to Denver Riggleman as well).

Stewart not only emphasizes his role pushing issues of strong interest to conservatives long before anyone else, but also that he is the only candidate in the race who has shown he can consistently win elections in “blue” parts of Virginia, which is how to reverse the trend in recent elections where the state has repeatedly elected Democrat Governors and U.S. Senators.

Conservatives won last year, says Mr. Stewart, because they chose an outsider with a track record of accomplishment, and he fits the bill as exactly that sort of candidate for Governor this year.  He’s attracted a lot of conservatives to support him, such as Cynthia Dunbar, one of the two GOP National Committee members for Virginia, who believes “Corey has that true grit that is needed.”

But his claims are strongly challenged by the other candidates and their supporters, who point to his being dismissed as the Trump for President state chairman after he refused to stand down as ordered in a street protest outside GOP headquarters.

Corey Stewart’s detractors say he wanted to get media attention so badly that he attacked GOP National Committee for not doing enough to help campaign in Virginia.  The Trump campaign didn’t want to see stories about their “withdrawal” from Virginia, which they denied happened at all.  One side says Corey Stewart was vindicated when the state voted for Hillary Clinton, just as they feared.  The other side says the dismissal proves Corey Stewart is not a team player.

In any event, Corey Stewart’s past runs for state office have failed to attract unity among conservatives to support him and that is why, they say, he has been unsuccessful.

The other GOP national committeeman from Virginia, Morton Blackwell, notes that it remains to be seen if President Trump will indicate support for any candidate in the GOP contest.  His inference is that it is premature to suppose either challenger to the Ed Gillespie has any “lock” on the support of Trump supporters in Virginia.

Blackwell is supporting the frontrunner, Mr. Gillespie, saying that his candidate “has a long history of conservative activism going back to his time as a top aide to former Rep. Dick Armey in the 11990’s.” (Washington Times).

Despite the assertions of the highly respected conservative Morton Blackwell, President of the Leadership Institute, a past co-sponsor of the Freedom Leadership Conference, those conservatives who strongly supported Donald Trump for President last year believe that Gillespie was “hiding in the weeds” during that campaign as reported in the Washington Post.  Gillespie was “slow and indecisive” in supporting Trump, they reported, in contrast to the widely publicized efforts of Corey Stewart.

That same Washington Post article concludes that this year’s Governor’s race – both the primary and the general election – “is going to be all about Trump.  Full stop.”

They say “Virginia’s gubernatorial race has always been a sort of referendum on the newly elected president” and this year “is all about Donald.”

Other publications have echoed this theme, such as The Economist, which said, “A former chairman of the Republican National Committee whose establishment credentials include a stint as an adviser to George W. Bush, Mr Gillespie has kept a careful distance from the president-elect. Come primary day, Trump Republicans may remember such perceived apostasy.”

Spence Rogers, the campaign manager for Corey Stewart, told a Freedom Leadership Conference organizer that his candidate not only appeals to Donald Trump voters but also is best suited for the supporters in last year’s primary of Senator Ted Cruz.  He says if you put the Trump and Cruz voters together behind Corey Stewart then his candidate wins the GOP nomination easily.

Senator Frank Wagner would dispute that, even though it appears he may not be there this Thursday at the Freedom Leadership Conference to make his case.  He is the only candidate who proudly points to his long track record as an elected official, as well as his work as a business owner and military veteran.

But the candidate who may give Corey Stewart the most difficulty this Thursday in laying claim to conservative support, is longstanding conservative businessman and military veteran Denver Riggleman.

Although Corey Stewart would seem to have the “home court advantage” having spoken at a past Freedom Leadership Conference, Denver Riggleman is the only candidate who took the time to address a message to conference attendees and supporters, which was carried in full at the conference website (message and story HERE).

Denver Riggleman says he would best “champion the conservative ideals outlined in your Thurmont Statement of conservative principles.”  He salutes the conservatives who participate in the Freedom Leadership Conference, saying “You have been carrying that banner forward for years, and I stand in solidarity with you, as together we fight to restore liberty and opportunity to this great Republic.”

Riggleman’s supporters include many of the Trump campaign operatives who felt that Corey Stewart had not been a team player in following the direction of the campaign and point to what they think is the better track record of their candidate as an Air Force veteran, defense intelligence and cyber warfare expert and successful businessman.

While no one expects the face off at the Freedom Leadership Conference this Thursday to be decisive, it will be a very rare opportunity for conservatives to compare two challengers to the frontrunner, side by side, who very much want their support and are willing to come to their conference and say so.  Despite any differences between Corey Stewart and Denver Riggleman, one thing they appear to be very much agreed on – the frontrunner, Ed Gillespie, should not be who conservatives turn to as their champion and defender of the Trump agenda.

The Governor Forum sponsor, Americans for the Trump Agenda, while not endorsing or supporting any candidate to win the GOP nomination for Governor, invited the candidates to answer one simple question this Thursday: “who would best help enact the Trump Agenda as Governor of Virginia”?

With both Corey Stewart and Denver Riggleman committed to attend and speak at this Governor Forum on Thursday, we may soon know who has the advantage against the frontrunner who would prefer to speak about other issues in the contest.

But the Corey Stewart vs Denver Riggleman appearance this Thursday has conference organizers delighted, with one pointing to the obvious: “we now see who really cares about conservative voters who strongly supported Ben Carson, Donald Trump and Ted Cruz and then after the primary strongly supported Donald Trump and we are grateful to both Corey Stewart and Denver Riggleman for their commitment and wish them the best on Thursday.”

This article is reprinted from REDSTATE, and is also syndicated to Americans for the Trump Agenda and has been made available to Fairfax Free Citizen.

Glenn Ryt helps promote the Freedom Leadership Conference for coalition conservatives several times a year in Northern Virginia and is on the lookout for like-minded friends at Facebook or at the Conference Facebook Page.  Future conferences are scheduled for 2017 on Thursday evenings.  Conservative organizations are welcome to join the ranks of the 75 conservative cause groups which have participated in the past 18 years, to co-sponsor and provide the principal conference speaker write EventCoordinator@FreedomLeadershipConference.  For a free subscription to the conference e-newsletter Freedom Digest write with your name, zip code to Subscribe@FreedomLeadershipConference.org.