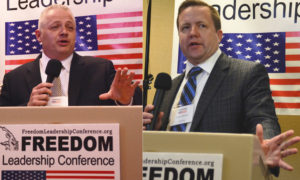 Candidates for governor Denver Riggleman and Corey Stewart appeal to conservatives at Freedom Leadership Conference co-sponsored by Americans for the Trump Agenda and Fairfax Free Citizen on Feb. 16, 2017 in Chantilly, VA.

Ed Gillespie, buoyed by public opinion polls that show him as the frontrunner for the GOP nomination for Governor in the June 2017 primary, was dealt a big setback at the Freedom Leadership Conference co-sponsored by Americans for the Trump Agenda and the Fairfax Free Citizen after conservatives voted for his two primary opponents, Corey Stewart and Denver Riggleman, by a better than two to one margin in a secret ballot “straw vote” following very well received remarks of both conservative challengers.

The button handed out free to dinner attendees by Americans for the Trump Agenda at Freedom Leadership Conference Feb. 16, was sported by both candidates for Governor, Denver Riggleman & Corey Stewart.

(The next conference is 3/16, again at the Wingate by Wyndham in Chantilly, VA, sponsored by Capital Research Center with Dr. Steven Allen on “Follow the Money” – how the left is financing the assault on the Trump Presidency.  The last seven conferences have been full capacity with the most recent one literally standing room only.  Advance registration required HERE.

Senator Frank Wagner, whose staff had advised us they were trying to schedule our conference and then just before the conference that the Senator could not attend, earned zero votes from the standing room only crowd of conservatives, sponsored by Americans for the Trump Agenda.

Many in the room sported the bright red “Trump Yes” button provided by conference co-sponsor Americans for the Trump Agenda including both candidates who made an appearance.

Ed Gillespie, who also neither answered the question nor attended to speak, was punished with 29.4% of the vote – a last place finish of the three contenders who received votes.

The Prince William County Board of Supervisors Chairman, Corey Stewart, had a “home court advantage” in making his second appearance before a Freedom Leadership Conference.  Back on August 2, 2010 Stewart spoke as one of the two conference principal speakers together with conference co-chairman Emy Delgaudio in defense of the “Arizona rule of law.”  Such a law to enforce America’s immigration law, was actually enacted in Prince William County under its Chairman, Corey Stewart and then he spoke at the 2010 conference where he proposed a similar law for Virginia.

These and other battles he fought to advance conservative principles were highlighted in Stewart’s second appearance before the conservative group.  A second major advantage for Stewart was the eloquent introduction by the editor of Fairfax Free Citizen, Lt. Col. Tim Hannigan (USMC, Ret.).

Candidate for governor Denver Riggleman on the other hand, highlighted his many years as a successful businessman instead of his spending years working as a government employee, saying a true outsider with business ties was elected President and can be elected as Governor of Virginia.  The unknown candidate who has never held elective office, surprised everyone by coming in ahead of the much more well known and better financed frontrunner, Ed Gillespie, in the straw poll of conservatives last Thursday night.

Riggleman further endeared himself to conference attendees by staying through to the end of the conference, posing for photographs outside with attendees, and answering questions posed to him.

Corey Stewart, who had to depart earlier than Riggleman, arrived much earlier and had dinner with the conference attendees who were able to come earlier.

This was the first time in the 18 year history of the Freedom Leadership Conference that candidates for office were invited as the principal speakers.  Another first was having an area set aside for the conference attendees to sign the petitions required to allow the candidates’ name to appear on the June primary ballot.

The United States Intelligence Council was the third co-sponsor in the tightly packed agenda of the February 16 Freedom Leadership Conference, presenting Dr. R. Evan Ellis, on the subject of Communist China advances in the Western Hemisphere. Dr. Ellis is the author of 170 works.

The presentation of Dr. Ellis provided a major update with new information following the 2002 publication of the book Stealth Invasion—Communist Chinese Operations in North America, by Dr. Roger Canfield, USIC Exec VP. Dr. Canfield’s earlier book, China Doll: Clinton-Gore and the Selling of the U.S. Presidency, was distributed during the 2000 presidential election. Both books were published by U.S. Intelligence Council with a print run of nearly one million circulation to raise awareness of the threat of Communist China to the freedom, security, and independence of the United States.