Three candidates who are reported to be out in front in the polls for the GOP nomination for Governor have told us our February 16 date to attend and speak at the Governor Forum of the Freedom Leadership Conference is now on their schedule as we continue in daily contact with their office, while State Senator Frank Wagner has yet to decide if he will accept our invitation.

Two of our past supporters have stepped forward with a Host Committee Donation ($100) to help us pay for extra advertising and promotion for what we expect to be a full capacity crowd at the Wingate by Wyndham off Route 50 near Route 28 at 3940 Centerview Drive, Chantilly, VA, the new, better and expanded hotel we have been forced to move into after the last five full capacity conferences of 2016.

There is priority seating for Host committee followed by those attending the dinner (5:30 to 6:30 PM, doors open at 5 PM), with a smaller number of seats reserved for conference-only attendees (only $5,  begins 7 PM, doors open 6:30 PM), advance registration is required for admission, HERE. 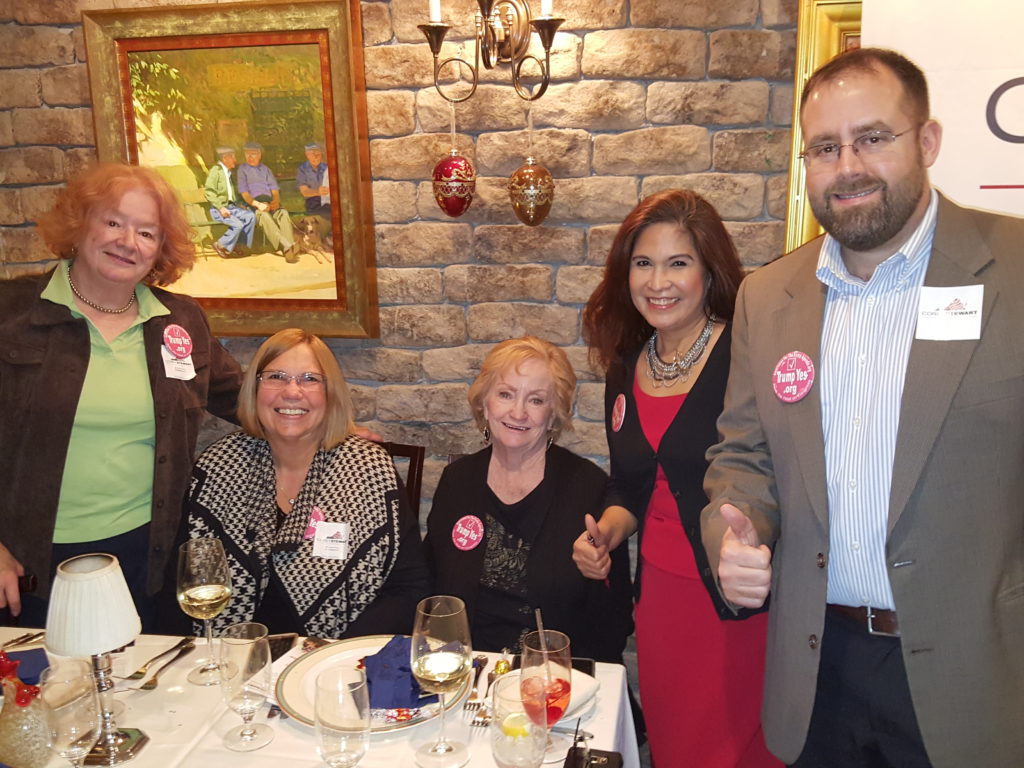 At the Corey Stewart campaign announcement on 1/23 a group of his supporters wearing the brand new TrumpYes button pose with the Freedom Leadership Conference Chairman Emy Delgaudio (2nd from the right) and the campaign manager, also wearing the new button to show support published by Americans for the Trump Agenda, the sponsor of the Governor Forum on 2/16. Spence Rogers is a former member of the elite US Army Rangers, decorated combat veteran (Bronze Star) and accomplished campaign staffer for the past presidential campaign of Senator Ted Cruz. Both Emy and Corey were the two principal speakers at a “defend the rule of Law Arizona Day” conference on August 2, 2010 where he announced legislation for Virginia similar to his first in the nation (before Arizona) law in Prince William County where he is Chairman. (important note: none of the conference board members will endorse any candidate until well past the 2/16 conference date).

Following the speeches of the candidates – scheduled at 14 minutes each – there will be a straw poll vote by secret ballot and an instant tabulation so that we can announce the choice of conference attendees before adjournment at 9 PM (each candidate who does not appear will have their 14 minutes given to the other candidates who wish to do Question & Answer).

To attend, To Invite your Friends:

Freedom Leadership Conference leaders have actually met with 3 of the 4 candidates to invite them to this February 16 event last Monday and Tuesday, following email and letter invitations sent on Monday morning, 1/23.  There is a lot of competition for a candidate’s time during a campaign but an event like this with the best and most committed, coalition-minded conservative activists and donors in Northern Virginia, may very well make this a “must attend” event for any serious contender for the GOP nomination for Governor and hopefully the ultimate winner who will be our next Governor.

The United States Intelligence Council is the second co-sponsor of the February 16 Freedom Leadership Conference, presenting Dr. R. Evan Ellis, on the subject of Communist China advances in the Western Hemisphere.  Dr. Ellis is a Research Professor of Latin American Studies.

The presentation of Dr. Ellis is expected to provide a major update with new information following the 2002 publication of the book Stealth Invasion – Communist Chinese Operations in North America, By Dr. Roger Canfield, USIC Exec VP.  Dr. Canfield’s earlier book was distributed during the 2000 presidential election, “China Doll: Clinton-Gore and the Selling of the U.S. Presidency.  Both books were published by U.S. Intelligence Council with a print run of over 1 million circulation to raise awareness of the threat of Communist China to the freedom, security and independence of the United States. 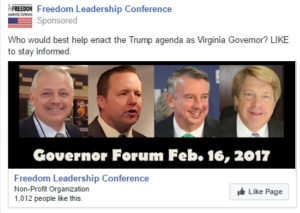 Facebook ads already run in the past 10 days have reached 8,238 conservatives who reside within easy drive distance of the conference, plus the 1000 members of our Fan Page, subscribers to our e-newsletter Freedom Digest and other conservative groups which carry the news. Here is a new ad which began a second wave of ads yesterday. This is made possible by the extra donations and the Host Committee Donors who support the conference. Sponsor, dinner fees and the minimal admission fee of $5 barely cover the room rental and associated incidentals.

Conference advertising has focused on the 26 zip codes closest to the Chantilly Conference and in the past 10 days have reached 8,238 conservatives, with two weeks to go until the 2/16 conference.

The highest number of people reached in the past year via paid and “earned media” activity is 9,000 with the new effort almost guaranteed to surpass that number before the conference.

The Freedom Leadership Conference, in its 18th consecutive year of operation, is rapidly becoming the premier function for coalition-minded conservatives.

With additional financial support there is still plenty of time for us to expand the advertising – another two ads were placed yesterday – to reach a new conference record in the next two weeks and guarantee a 7th consecutive, full capacity crowd, see yesterday’s board report HERE. 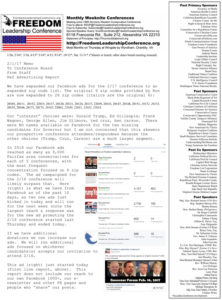 We appreciate the support of any of our readers who can help us expand our advertising for this regular conference for coalition conservatives and who can donate or register as a conference Host Committee (Supporters are seated at the table with the candidates who speak at the conference).

The cost of the conference is barely met with sponsor fee, dinner and entrance fees with little if any funds remaining for paid conference advertising.

Any donation our friends and supporters can extend really makes a difference.