Conference Dinner attendees to get gift of Americans for the Trump Agenda at Freedom Leadership Conference tomorrow, others may purchase $3 each or 2 for $5

Americans for the Trump Agenda will provide one of its new RTrumpYes buttons or one of its new vinyl bumperstrips to every person who attends the dinner at the Freedom Leadership Conference tomorrow, Thursday, Feb. 16 at the Wingate by Wyndham Hotel, off Route 50 near Route 28, 3940 Centerview Drive, Chantilly, VA.  The conference runs from 7 to 9 PM, also the site of the “Governor Forum” presented by Americans for the Trump Agenda and the Fairfax Free Citizen with candidates for Governor, Corey Stewart and Denver Riggleman, making plain their interest in having the support of conservatives by their commitment to attend and speak.  The dinner – where the choice of a free, 3-inch button or a vinyl sticker will be given to each attendee, runs from 5:30 to 6:30 PM with doors open at 5 PM (advance ticket required, register HERE). 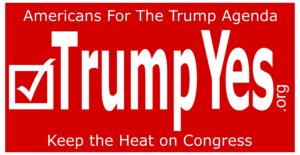 Free vinyl bumperstrip for dinner attendees on Thursday night from Americans for the Trump Agenda (aka TrumpYes.org) which asks, which candidate would best help enact the Trump agenda as Virginia Governor?

(Dispatch of Glenn Ryt begins here) While Denver Riggleman and Corey Stewart have been less than shy and reticent in making clear their interest in the support of conservative GOP voters in the June primary, the charming and ever-self confident frontrunner, Ed Gillespie, has teased conference organizers for the past two weeks by directing his staff to tell them that this event is “on the schedule” (continued next page you had better not miss this)…

(continued from previous page) … and that he has nothing but love and affection for conservatives who amuse themselves by attending or following such conferences, while nonetheless not ever confirming that he would actually consummate what our sources say is his ardent love for the conservatives by actually attending in person.

In contrast the staff of Corey Stewart and Denver Riggleman no doubt must shudder with joyful anticipation of having all conservatives line up with one or the other of them since it appears that the apparently bashful Gillespie has other priorities tomorrow, Thursday evening, although conference organizers are grateful to know that for two weeks and through this very present moment, Freedom Leadership Conference has been “on the schedule” of the less than obviously eager Ed.

That puzzling mix of earnest interest and bashful reticence is a posture surely ranks Ed Gillespie ahead of Senator Frank Wagner, who is more experienced than bashful but nonetheless frontrunning Gillespie as a military veteran and state legislator.  Wagner’s staff could only tell us during the past two weeks that they were “trying” to schedule this conference, a posture which changed to ‘sorry cannot make it” two days ago while bashful Ed’s staff in marked contrast, courageously hung on with “its on the schedule”.

No doubt the Riggleman and Stewart camps will deny that they tremble in fear that the Gillespie machine may actually produce their candidate on Thursday night to confront them and destroy their monopoly on conservative support they each are hoping for.  But we seriously doubt it.

Regardless of whether the shy and bashful frontrunner will actually challenge them as they are poised with shovels ready to scoop up all conservative voters who attend the conference but also those who will read about their interest or who noticed the advertising to Fairfax County conservatives on Facebook featuring their two happy faces with no mention of the missing bashful and conflict of schedule candidates.  At this juncture conference organizers say they have set a new record for Facebook advertising, reaching over 12,000 Fairfax area conservatives.  The ads have changed in the past 2 days to feature a photo of just Corey Stewart and Denver Riggleman.

No doubt the advantage shifts to the two candidates in the Straw Poll – Corey and Denver if we may be so presumptuous as to call them by the friendly reference to their first name – who are scheduled to speak and mingle with the conservatives at the Governor Forum of the Freedom Leadership Conference tomorrow night.

Actually the draft of the schedule for the 7 to 9 PM conference is now in circulation to all scheduled conference speakers and conference board for final review and approval as of this post, and bashful Ed is not on the program.  If a last minute surprise takes place perhaps Corey and Stewart might want to yield back some of the time allocated to them – 14 minutes each plus 5 minutes for questions and answers (2 each from the audience, to be read by a moderator).

(note: We now resume our regular programming. Parts of this dispatch as marked and were written by Glenn Ryt and have not been reviewed, approved or necessarily condoned by the board and leadership of the Freedom Leadership Conference; if any candidate for Virginia Governor who is mentioned in this article wishes to take exception to the irreverent and forthcoming mentions of their campaigns, the board is available to so review any part of this post which they find offensive although their having a sense of humor may be questioned in that event by their competitors for the job.  Alternatively, praise, commendations, marriage proposals, notice of the gift of cash or chocolates or hemlock, or condemnations may be posted to either the conference Facebook page or by email to EventCoordinator@FreedomLeadershipConference.org)

The “Governor Forum” part of this Freedom Leadership Conference is co-sponsored by Americans for the Trump Agenda and the Fairfax Free Citizen.

The other conference co-sponsor, United States Intelligence Council, presents a speaker on the subject of Communist China’s advances in the Western Hemisphere, see the previous article:

US Intelligence Council to Co-Sponsor Freedom Leadership Conference to Warn, US must counter China’s Invasion of Western Hemisphere; https://freedomleadershipconference.org/dr-r-evan-ellis-to-warn-of-communist-china-this-thursday