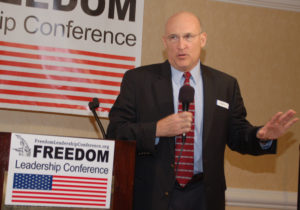 The Fairfax Free Citizen (FFC) has joined as a co-sponsor of the “Governor Forum” at the Freedom Leadership Conference this Thursday evening, Feb. 14 from 7 to 9 PM.  FFC Editor Tim Hannigan will help introduce the subject of what conservatives look for in a Governor and ask the question “How would you help enact the Trump Agenda as Governor of Virginia” of the two confirmed conference speakers, Corey Stewart and Denver Riggleman.

Frontrunner Ed Gillespie has this event on his schedule for the past week, with his staff telling conference organizers as late as yesterday afternoon that he is still considering whether to attend and speak.  The third challenger to the frontrunner, State Senator Frank Wagner, has cited a legislative committee meeting he must attend instead of the conference.  (Advance Registration is required for admission, 7 to 9 PM conference for only $5 or dinner 5:30 to 6:30 PM register HERE).

One thing the two confirmed speakers agree on is that conservatives should not support the candidate they say is too tied in to the establishment GOP and was far too reticent and bashful about supporting Donald Trump during last year’s campaign.  Gillespie would dispute them if he attends on Thursday evening, countering by discussing his long work for Republican and conservative causes and his list of endorsements, such as Morton Blackwell, GOP National Committeeman for Virginia and President of the Leadership Institute, a past co-sponsor of Freedom Leadership Conference.

The other “Governor Forum” co-sponsor is Americans for the Trump Agenda, formerly Americans Against the Obama Agenda.

A third conference co-sponsor, United States Intelligence Council, will present Dr. R. Evan Ellis to speak about Communist China’s growing influence in South America and why this is a threat to the security of the United States.  Author of over 170 works including the book, “China on the Ground in Latin America”.  His presentation will be an excellent followup and update on the USIC books from 2000, Stealth Invasion: Communist Chinese Operations in North America, and the 2002 China Doll: Clinton-Gore and the Selling of the U.S. Presidency, by USIC Executive Vice President, Dr. Roger Canfield (then the Executive Director).

Conference organizers say the meeting room is already 80% full but that dinner and conference tickets are still available HERE.  Conference Host Committee members ($100 donation) will have priority seating at the dinner.  Those attending the dinner will be seated at the front of the room with conference-only attendees at the rear.