The keynote speaker at the Freedom Leadership Conference in July urged the House of Representatives to reject the Senate “Gang of 8” Amnesty proposal for illegal aliens, detailing the net cost to U.S. taxpayers at $6.3 trillion.  The bottom line said Jon Moseley, is “amnesty for illegal aliens will seriously harm the United States economy.”

The July 17 conference was sponsored by American Border Control, which provided Moseley, its Executive Director, to deliver the keynote remarks to the conference which he has addressed a number of times in 2012, 2011 and earlier.  The Conference co-sponsor for July was New Americans by Choice which provided a speaker on “Why I Chose America.”
Each of the monthly conferences since late 2012 have also been done with the support of Freedom Center Foundation, one of the original conference founders 14 years ago.

Moseley blasted the “Gang of 8” claims that their amnesty proposal will not cost taxpayers $6.3 trillion because they base their numbers on assumptions instead of the reality that the Heritage Foundation has documented. 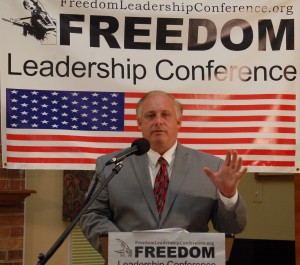 Jon Moseley delivers keynote remarks at July 17, 2013 Freedom Leadership Conference on how Amnesty for Illegal Aliens will hurt US economy

“Illegal aliens will be exempt from ObamaCare when they receive amnesty and the right to work” he pointed out.  “Therefore, it will be vastly cheaper for businesses to hire amnesty receipients than to hire American citizens such as black youth or legal Hispanic Americans.”  He said that there is also a very real danger that many Americans will lose their jobs because they can be replaced cheaper without Obamacare costs, by the newly legalized illegal aliens.

Moseley also jokingly said the new “Registered Provisional Immigrant” status is the equivilant of a new “blue card” to replace the old “green card” – meaning the voters will vote “blue” or Democrat from now on.

Moseley also pointed to the damage that will be done to the working poor in America because employers can hire much cheaper labor in the future if amnesty is approved, boosting their already record unemployment.

He cited the current employment rate of 104 million in America – which will be supplemented by 40 million new workers under this amnesty.

Documenting this, Moseley said, “Now because of chain migration  – that is, family unification rules — an estimated 11 to 20 million amnesty-recipients who are in the country now will also be able to bring in to join them their fathers, mothers, husbands, wives, sons, daughters, etc.   So an estimated 33 to 40 million new workers will flood the U.S. labor force.”

“Blacks in America now suffer 14.1 percent unemployment, the Bureau of Labor Statistics reported in August 2012,” said Moseley, versus “the unemployment rate in Mexico of only 4.7 percent in September of 2012.”

The July conference keynote speaker criticized the new Amnesty proposal as a rejection of the fundamental principles of the free market, in favor of a command economy used in communist countries.

The simple fact is, Moseley said, those who favor amnesty while claiming they are helping the economy, are attempting to lower the price of goods by bringing in new foreign workers rather than letting those jobs go to Americans – especially black Americans with the highest unemployment rates in many decades.

“Anyone with the slightest understanding of economics will want to scream,” he said, “Yet many calling themselves conservatives talk as if they’ve never heard of supply and demand.”

“The argument for amnesty is a fundamental rejection of the free market” because crony capitalists are using the power of the government to bring in workers to replace Americans at a lower price, rather than pay them the wage being demanded.

The net result of amnesty will be higher unemployment by those who are already American citizens, a lower standard of living and a damaged economy.

Under the amnesty proposal now pending before the House of Representatives, “a flood of invaders will continue.”

Moseley concluded his remarks by stating, “Not only would legalizing illegal aliens be bad for America, but the arguments offered reflect a shocking rejection of the free enterprise system our country was built on.”

The Freedom Leadership Conference was founded 14 years ago on the west coast.  The conference changed to a private, members only, monthly function in late 2012 and has now had 61 conservative cause organization and publication sponsors.

Moseley and his American Border Control have opposed efforts to liberalize American immigration for many years.  More recently Moseley has been a Philadelphia, PA radio talk show co-host for “the conservative Commandos” and a columnist at American Thinker.

Jon interviewed Derrick Morgan, Vice President of the Heritage Foundation, for his radio talk show and then wrote an article about it at American Thinker, HERE.

Jon Moseley spoke at the Freedom Leadership Conference of November 11, 2011 and again at the December 5, 2012 Conference.  His 2011 remarks were entitled Obama’s War Against the States, From Arizona to Alabama & Onward: 16 Countries Join Fed’s Legal Assault as “Friends of the Court” – read full text HERE.

The July 17 conference was held for the first time at a private residence, and included a “Summer Barbecue” dinner with the Conference’s Leadership Council and keynote speaker.

Tickets for the 8/21 conference, to be sponsored by Birthmother Ministries, are now on sale.  The August conference will be held at the same Fairfax City area location as the June conference, which was a “standing room” only event with some attendees having to stand out in the hallway.

The principal speakers for the August conference include State Representative and book author Stephen Bloom, who wrote “They’ve Crossed the Line: a Patriot’s Guide to Religious Freedom.”  His book, which sells for $14.60  on Amazon, will be available for autographing by him for only $10 at the conference, on a first come first served basis, with priority to those who have advance reserved a copy when they made their conference reservation and to those members who attend the pre-conference dinner at 5 PM.

The conference is a private function for members only, with a different conservative cause organization as the sponsor every month since late 2012, after 14 years as an annual function.  Application for New Provisional Membership, which if approved entitles you to an invitation to attend one of the Wednesday evening meetings, can be done HERE.  For those approved as Provisional Members or already members, an RSVP Form is HERE.

The August function is billed as “A conference for people of faith” and will also include remarks by Birthmother Ministries founder and President Jim Wright, and Andy Shaw, who challenged Planned Parenthood’s favorite Pennsylvania legislator in a GOP primary last year and earned national attention at REDSTATE for his articulate advocacy of traditional conservative values.

A more detailed report on plans for the August 21 conference is at our last posting, A Conference for People of Faith set for August 21.

Early bird discounted dinner tickets are also available to those who have already attended at least one meeting and are conference members, until Monday, July 29, HERE.

Nominations for the monthly “Saul Alinsky Smear Conservatives” award may be made to LeftSmear@FreedomLeadershipConference.org.  A report on recent awards will be made in a future posting here.