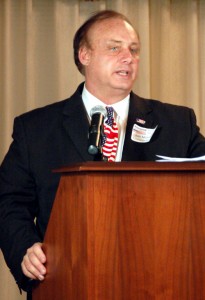 The keynote speaker for the Freedom Leadership Conference next Wednesday, July 17, is no stranger to the immigration issue.  Jon Moseley has opposed efforts to liberalize American immigration law for more than five years as Executive Director of American Border Control, and more recently as a Philadelphia, PA radio talk show co-host for “the conservative Commandos” and as a columnist at American Thinker.

In fact, Jon recently had the chance to use both outlets – radio and his column – to make arguments against the “Gang of 8” proposal which has passed the Senate and is now pending before the U.S. House of Representatives.

Jon interviewed Derrick Morgan, Vice President of the Heritage Foundation, for his radio talk show and then wrote an article about it at American Thinker, HERE.

Jon’s observation in this article is simple and well documented: the “Gang of 8” proposal makes assumptions and projections, while the Heritage Foundation provides detailed, actual numbers based upon reality.  And that reality is, if the amnesty is approved, it will cost the U.S. taxpayer $6.3 trillion in new expense.

Specifically, Jon reports that those granted amnesty – by whatever name they will be calling it – will receive $9.4 trillion more in government benefits while paying $3.1 trillion more in taxes – a net loss to the U.S. taxpayer of $6.3 trillion.

As the keynote speaker for the Freedom Leadership Conference, Jon will speak in behalf of the conference sponsor next Wednesday, American Border Control, as this issue is now before the U.S. House of Representatives after passage in the Senate.

Jon spoke at the Freedom Leadership Conference of November 11, 2011 and again at the December 5, 2012 Conference.  His 2011 remarks were entitled Obama’s War Against the States, From Arizona to Alabama & Onward: 16 Countries Join Fed’s Legal Assault as “Friends of the Court” – read full text HERE.

Jon Moseley is traveling from Florida to attend and keynote the July 17 conference at a private residence, where he will be the guest of honor at a “Summer Barbecue” dinner with the Conference’s Leadership Council.

The conference is a private function for members only.  Application for New Provisional Membership, which if approved entitles you to attend next Wednesday’s meeting, can be done HERE.  For those approved as Provisional Members or already members, an RSVP Form is HERE.

Nominations are still being sought for the Saul Alinsky Left Smear of the Month Award.  Several nominations will be shared in this space shortly, stay tuned.

One interesting nomination is still being researched – we understand that there have been smear threats made against the confirmed keynote speaker for the August 21 Freedom Leadership Conference, Rev. William Cook with demands that he cancel his appearance or face the threat of being smeared and attacked.

The idea of having conservative ministers, priests or rabbis speak about faith and politics (not candidates – but issues) seems to engender more negativity than most other conservative spokesmen face.

Rev. Cook made a very positive impression at the June 12 conference he attended for the first time where he did the opening prayer and also spoke about his favorite part of The Thurmont Statement of Conservative Principles adopted by this conference.

We urge prayer support for Rev. Cook, who plans to attend the 7/17 Conference on his way to being the featured speaker under the auspices of the 8/21 conference sponsor, Black Robe Regiment of Virginia, where he is the founder and Executive Director.

Our keynote speaker from June 12, John Guandolo (see UnderstandingTheThreat), has confirmed that he will also make remarks and will introduce Rev. Cook at the August 21 conference.

Dinner Tickets for that 8/21 event will go on sale at the “super early bird” rate, at the 7/17 conference (bring a check or cash if you are wish to avail of this discount).  The Conference itself always begins at 7 PM with a coffee/tea and dessert social and adjourns at 9 PM.

Nominations for the Alinsky award may be made to LeftSmear@FreedomLeadershipConference.org.