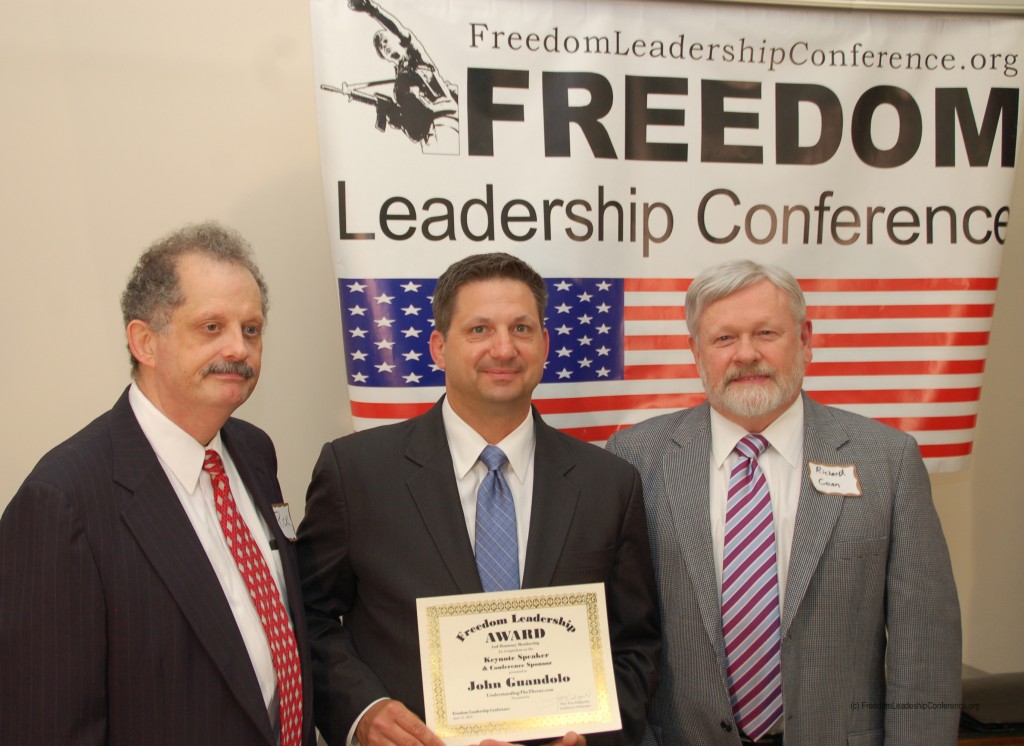 John Guandolo (center), keynote speaker at the June 12 Freedom Leadership Conference, being presented the “Freedom Leadership Award” by Conference Event Coordinator Richard Buck (L) and Conference Master of Ceremonies Richard Conn (right). The link to his remarks – both video and the text – are to be found in this article.

The question to be addressed by keynote speaker Jon Moseley at the Freedom Leadership Conference next Wednesday is simple: should the U.S. House of Representatives approve the Senate’s “Gang of 8” proposal to liberalize American immigration law, aka amnesty?

This conference has a variety of home cooked and self catered deserts on the menu besides the usual coffee and tea at a private residence starting at 7 PM, so the “last minute RSVP” is out – only those Conference Members who write in advance – by next Monday at 11 PM – will be able to attend (or you use the conference eventbrite reservation page), HERE.

Those who are already Conference members are invited to the “Leadership Council” dinner with keynote speaker Jon Moseley, starting earlier than usual at 4:30 PM (dinner served 5 PM) for this event to take advantage of the summer weather and the very outstanding private garden and backyard of the private residence, at a more informal “Summer Barbecue” with informal summer attire suggested.

The Freedom Leadership Conference speakers focus on the issue of concern to the sponsor organization each month.

Despite this focus many of them are more broadly interested in the conservative cause and share this at the conference in additional remarks either before or after their keynote remarks, which are strictly limited to 14 minutes in order to fit their recorded remarks onto youtube and reach an audience much larger than those who attend each month in Northern Virginia.

For example, abortion is an issue that is a cultural, moral and national security issue, keynote speaker John Guandolo spoke of at the June conference, which is separately viewable on youtube (click on photo above to hear/view the introduction part of his remarks).

John Guandolo’s remarks were on the subject, “Global Islamic movement threatens USA from within” but as you will see from this separately recorded introduction he touched on many other issues also.

“Chewing a pop tot into the shape of a gun” got a very young student into trouble, and this is a “level of insanity” we have never seen before, said Guandolo.

“A Soviet nuclear bomber flown over U.S. territory at Guam,” but there was no reaction whatsoever out of the Obama Administration, encouraging our enemies to expand aggression against America and freedom throughout the world, continued Guandolo.

Although John Guandolo’s appearance at the June conference in behalf of co-sponsors UnderstandingTheThreat (which he operates to distribute books, tapes and promote his own blog) and United States Intelligence Council (whose Projects Director Richard Buck is also the Conference Events Coordinator), this keynote speaker became one of the most popular of the year because he is what we call a “full spectrum conservative” who is interested in a broad range of issues of concern to conference attendees.

If you have not done so we strongly urge you to read his entire remarks available at this website HERE (many of our past keynote speakers’ remarks are posted at the conference website also), or view the two John Guandolo posts at youtube – these introductory remarks and also the full keynote remarks.

The keynote speaker at the July 17 Freedom Leadership Conference is another “full spectrum conservative.”  Although he is speaking in behalf of conference co-sponsor American Border Control, which he serves as Executive Director, Jon Moseley is another full spectrum conservatives, who is one of the founding members, leaders and speakers of the recent version of this conference which went monthly in late 2012.

Jon Moseley’s topic is “LEGALIZE ILLEGALS?  Why conservatives still say no to amnesty” as the U.S. House of Representatives this month considers the Senate passed amnesty bill.

In June, the Senate passed legislation to liberalize American immigration law as proposed in the liberal, Chuck Schumer & John McCain “Gang of 8” proposal.

Many conservatives have been saddened to see Senator Marco Rubio of Florida emerge as the liberals’ chief spokesman in the campaign to pass this amnesty bill, which they go to great lengths (as always has been the case in the past) to deny is amnesty.

Jon Moseley, who has spoken at past conferences including the November 11, 2011 conference, and the December 5, 2012 conference, has been a strong opponent of the “Gang of 8” proposal since it first emerged, and contends that Marco Rubio has lost support from most thoughtful conservatives as a result of his championing this proposal.

We welcome new provisional member applications for this private, members only, monthly conference which meets in northern Virginia.  The July 17 function is at a private residence, with the address being provided only to confirmed attendees.

To make application to become a member click HERE.

To reserve your free spot at the conference, which begins at 7 PM (suggested donation of $5 at the door to defray expenses) with a coffee, tea and dessert social time, click HERE.

Those who are already confirmed members may also attend the Leadership Council dinner honoring the keynote speaker which this month is a SUMMER BARBECUE that starts earlier at 4:30 PM, click HERE.

The flyer for the July 17 conference is HERE.

The Freedom Leadership Conference of Wednesday, August 21 will be sponsored by the Black Robe Regiment of Virginia, featuring their founder and executive director, Rev. William Cook, as the keynote speaker.

A second keynote speaker has been added for August 21, Pennsylvania State Representative Stephen Bloom, Co-Author, They’ve Crossed the Line: A Patriot’s Guide to Religious Freedom, with an introduction by former presidential candidate and U.S. Senator Rick Santorum, Founder of Patriot Voices.  Copies of the book will be available for purchase and autographing at the conference along with photo opportunity for those who attend the dinner.

Two bonus speakers will also give introductory remarks.  Attorney Andrew Shaw earned national attention in a series of articles at the popular conservative website REDSTATE for challenging Planned Parenthood’s favorite legislator in Pennsylvania in the GOP primary.  He will introduce Rep. Stephen Bloom.

And, John Guandolo, the keynote speaker of the June 12 conference, will make a return engagement to deliver introductory remarks for his friend, Rev. William Cook, who actually attended the June function as his guest.

The theme of the August 21 conference is “The New American Civil Rights Movement: Americans of Faith, Rising.”

The sad fact is that too many Americans today still believe in what Presidential candidate John F. Kennedy said in 1960, that “the separation of church and state is absolute.”

That sounds mighty fine until you understand what he and the secular left mean by this.  The flowery rhetoric of the 1960 Kennedy sound very nice – we don’t want a minister or priest telling a President what to do, and we don’t want the government telling a church what to do.

But consider the Obamacare mandates and the strong protest we have heard from ministers, priests and rabbis as they learn that is EXACTLY what is happening – the government is in fact, telling them what they will be allowed to teach, preach and practice in the future.

“That is the kind of America in which I believe,” said Kennedy, whose 1960 speech can now be interpreted in light of the rise of Obama in America.

The secular left in America loves to point to sins or mistakes made by conservative leaders as proof that all of us are hypocrites whose policy proposals should not be listened to.

The secular-left’s counter proposal is to offer up policies and candidates not rooted in the faith of our fathers but a belief in some utopia which costs us more of our freedom and more of our tax dollars and worse, a downright hostility against people of faith.

They mean that people of faith should be silent about their moral compass when they speak on public policy issues.

The message of John F. Kennedy in 1960 is in very marked contrast with what Rev. William Cook and State Rep. Stephen Bloom will speak about on August 21 under the sponsorship of the Black Robe Regiment of Virginia.

Dinner tickets will go on sale at the “super early bird rate” of $30 at the 7/17 conference (payment by cash or check enables you to avoid any fees from Eventbrite for online ticket purchase, and saves the Conference the charges from Paypal).

We urge those attending the 7/21 conference to bring cash or a check to pay for the 8/21 conference dinner with Rev. Cook, Rep. Stephen Bloom, John Guandolo and Andy Shaw well in advance and save money.

Rev. Cook had made a very positive impression attending the June 12 conference on the invitation of keynote speaker John Guandolo, and was asked to briefly speak there.  He had been on the stage with Glen Beck and other members of the nationwide “Black Robe Regiment” movement for the anti-IRS rally very recently.

The 12/5 Conference is the only one without a sponsor and speaker for the balance of 2013, our first year of monthly conference events in Northern Virginia.

Conference Subscribers and Provisional Members are kept informed of these monthly conferences both before and after when they are given links to the speeches (text and video) of the keynote speakers.  Only Provisional Members (for which there are no dues) are entitled to attend one meeting, with regular members having the option to attend any (or all) of the monthly conference events.

Further information or inquires or to reserve your spot at the 7/17 conference (if you are a member) RSVP@FreedomLeadershipConference.org.

Nominations for the “Saul Alinsky Smear Conservatives Award” may be made to LeftSmear@FreedomLeadershipConference.org.