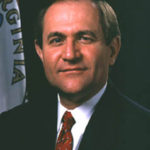 While liberal Democrats and their allies are celebrating the narrow victory of Hillary Clinton carrying Virginia, conservatives across America are celebrating the hard won victory of President-Elect Donald Trump and looking forward to change in Washington.  They will celebrate this Saturday at the Freedom Leadership Conference and answer the question, “What’s next” or to put it another way, “What do we conservatives want next?”

One of those who worked as hard as anyone for this victory for conservatives is the keynote speaker of the Freedom Leadership Conference being held this Saturday starting with a lunch at 12 noon, former Virginia Governor James S. Gilmore III, who has been a surrogate speaker, articulate spokesman and tireless campaigner for Donald Trump.  The Conference will be held at the Wingate by Wyndham, 3940 Centerview Dr. Chantilly, VA, off Rt. 50 near Rt. 28 and 10 minutes away from an I-66 exit.

Governor Gilmore has been asked to speak twice in fact – as the luncheon speaker, 12 noon to 1 PM (only $17) and then again as the Conference keynote speaker, starting 1 PM and ending 5 PM, please advance RSVP HERE for admission (only $5, or free for lunch attendees).

Advance Reservation Required, no admission without it
RSVP  annualconference17.eventbrite.com

Governor Gilmore will speak on the conference headline topic, “What do we conservatives want now?” for his luncheon remarks sponsored by Secure America Alliance, introduced by Ron Wilcox, their Executive Director.

Governor Gilmore will speak again about his Homeland Security Recommendations for President Trump and the new 115th session of Congress starting 1/3/17, sponsored by United States Intelligence Council and introduced by its Projects Director, Richard Buck.  USIC is the original founding sponsor of the Conference 17 years ago on the west coast, joined at the time by 30 co-sponsor organizations and has co-sponsored one or more of our quarterly conferences for the past 6 years.

Hon. James S. Gilmore, III, former Governor of Virginia, was Chairman of the Congressional Advisory Panel to Assess Domestic Response Capabilities for Terrorism Involving Weapons of Mass Destruction.  89% of the Commission’s recommendations were adopted.  The last of the 5 annual reports of the Commission were submitted December 15, 2003.  He is also the former Governor of Virginia (1998-2002), the former Chairman of the Republican National Committee (2001-02) and the President and CEO of the Free Congress Foundaton, succeeding its founder, the late Paul Weyrich, considered by many to be one of the original founders of the modern day conservative movement and what the news media have called “the religious right.”

Ronald Reagan Lecture Series will co-sponsor for the first time, presenting Nhan Lam on Freedom Yes Socialism No for America by a 1st generation American from Vietnam, introduced by Executive Director Andrea Thornock.

Uniformed Services League will present former candidate for Supervisor in Fairfax, John Guevara, a former officer in the U.S. Army Reserves, to speak about the terrible past treatment of our veterans under the Department of Veterans Affairs of President Barack Obama and what President Trump and the Congress should be doing to improve this treatment.  USL is a past co-sponsor of the Conference.

Additional co-sponsors may be announced at the conference.  Sponsors ($500) are given more time for their speakers and together with Co-Sponsors ($250) help subsidize the conference, thereby reducing the admission cost for attendees.  We strongly urge support for our conference sponsors of this 17th annual conference and then again for our sponsors when we resume our regular quarterly (and occasionally more often) series in 2017.  Write Chairman@FreedomLeadershipConference.org for information on sponsorship.

Speakers to review Thurmont Statement of Conservative Principles — the full list of “what we want,” adopted at the 10th Annual Freedom Leadership Conference in Nov., 2009 at Thurmont, MD (ThurmontStatement.org)

Some may criticize our earlier remark about Congresswomen Barbara Comstock and her role in this campaign which our sources have reported to us.  We offer a contrast to her and the Fairfax County GOP, which avoided all things Trump right until the end of the campaign.  Reince Preibus, the chairman of the Republican National Committee and recognized as a tireless campaigner by Donald Trump this morning at 2:30 AM or so, was on Fox TV later in the morning, and asked why he was so honored?

The RNC Chairman replied, “As chairman of the party, I have to support the nominee of the party… it’s not my job to nullify the will of the voters of our party.”  We honor him for his attitude and suggest that those who were unable to support the nominee of their party, should not hold office as Republican party leaders but should do the honorable thing and resign or if they won’t then they should be shunned by all conservatives and honorable Republicans.

It would be a reasonable guess on the part of you Dear Reader, to assume a high degree of likelihood, that Congresswoman Barbara Comstock, who’s failed effort to stop Donald Trump from winning as President by carrying for Virginia, may be appreciated by her friends at Fairfax County GOP HQ and perhaps even by the Virginia friends of Hillary Clinton, and that she won’t be a speaker at a Freedom Leadership Conference anytime soon.

We hope you will join us where the establishment GOP would not be so welcome, this Saturday from 12 noon to 5 PM, where we will be celebrating the victory of conservatives in helping Donald Trump win as President and helping the GOP retain control of this next, 115th session of the U.S. Congress.  And join us in letting them know “What we conservatives want.”

Advance Reservation Required, no admission without it