Which candidates for President (besides Donald Trump) agree with Ann Coulter?

Why are 4 out of the top 5 candidates for the GOP Presidential nomination “anti-establishment” challengers whose poll numbers are increasing while establishment candidates declines? 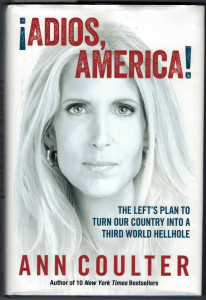 Larry Pratt will be the keynote speaker at the Wednesday, September 16 Freedom Leadership Conference at the Courtyard Marriott Hotel in Fair Oaks, Virginia to ask attendees if they agree with Donald Trump’s newly announced “deport illegals” stance, clearly echoing the stance of Ann Coulter in her newest bestselling book, ADIOS AMERICA! The Left’s Plan to Turn our Country into a Third World Hellhole.

The Conference will adjourn early for a “DEBATE WATCH” for the 2nd GOP Presidential Debate put on by the Reagan Library and CNN TV with a Large TV and an LCD Projector and commentary (during TV commercials) by Larry Pratt and a conference attendee survey to determine “Who Won the Debate.”

Pratt will speak in behalf of conference sponsor Gun Owners of America and say that Donald Trump’s detailed position on the illegal alien invasion of America will make him an unstoppable candidate for the GOP nomination for President unless other candidates match both his rhetoric and his ability to persuade frustrated GOP primary voters that the collusion between pro-amnesty Republicans and Democrats detailed in the Coulter book will be stopped and the policies of Barack Obama will be repudiated under their Presidency.

Pratt notes that four of the five top vote getters in the most recent public opinion polls are anti-establishment Republicans whose poll numbers are increasing while the sole establishment Republican in the top five, Jeb Bush, has watched his poll numbers decline.  Three of the four candidates – Donald Trump, Dr. Ben Carson, and Carly Fiorina have never held political office while the chief criticism of the fourth candidate, Senator Ted Cruz, is that he doesn’t cooperate with his fellow Senators including the GOP Senate leadership.

Larry Pratt’s first appearance at the Freedom Leadership Conference as Executive Director of Gun Owners of America, earned him the number one status at the conference’s youtube channel.

The second sponsor of the September 16 conference is another past conference sponsor, Secure America Alliance, which joins Pratt in criticizing Republicans who won’t take a stand to reverse what they call the Obama legalizing of illegals in defiance of the clear majority of Americans and over 75% of GOP primary voters.

Secure America Alliance will predict at the conference that “no Republican can be elected President in 2016 unless they make the reversal of the illegal Obama legalizing of illegals their priority issue” and they will give out free copies of Ann Coulter’s ADIOS AMERICA! book to all dinner sponsors who can arrive early to have dinner with Larry Pratt and the Conference Leadership.  Pratt’s remarks are open to the public at the free conference which asks for a voluntary $5 donation to help pay for the hotel room at 8:00 PM sharp (doors open at 7:30 PM), with dinner at 6:30 PM promptly (doors open 6:00 PM).